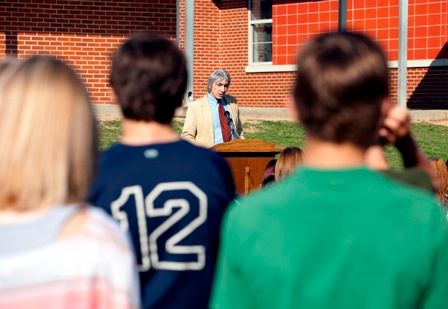 The award-winning Writing Our Stories (WOS) celebrated its second year at Columbiana Middle School (CMS) on May 18 with the release of Learning To Fly at the school’s annual Honors Day.

Tony Crunk, veteran WOS teaching writer, worked with host teachers Maite Miller and Richard Scott and some fifty-nine students to complete their anthology of original poems and stories. Ten selected students read from their work at the event.

Writing Our Stories is a creative writing collaborative program whose partners include the Alabama Department of Youth Services (DYS), the ABSOP project, and the Alabama Writers’ Forum. The Children’s Trust Fund provided funds for the WOS Curriculum Guide.

The Forum worked with Terri Sullivan and the Shelby County Arts Council to bring WOS to the Shelby County School District in 2011. This residency is the program’s first partnership with an Alabama public school outside of the DYS school system.

Additional support for WOS at CMS was provided by the Alabama State Council on the Arts, the Alabama License Tag Grant Program, and the Shelby County Arts Council.

Below are some photos from the book event. (Photos by Robin Cooper)