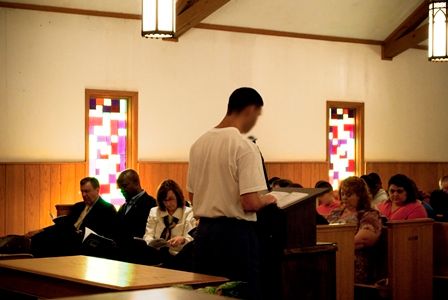 “You guys have a great future ahead of you,” said former Crimson Tide and Steelers cornerback Anthony Madison, addressing the newly published writers from the Writing Our Stories (WOS) program at the Lurleen B. Wallace School on the Department of Youth Services (DYS) Mt. Meigs campus. “I read your book, and you are intelligent.”

Held in the campus chapel, the event marked the release of Open the Door 15, an anthology of poems and stories from the student writers. Students, guests, and DYS faculty, staff, and administrators filled the chapel to capacity. “Optimism” was the theme of the day.

“I’m a huge fan,” said Jeh Jeh Pruitt, Fox 6 broadcast journalist and co-founder of The Dannon Project, addressing a group of newly published student writers. Holding his copy of From Darkness to Light high, he said, “When I read this book I felt every word.”

Pruitt gave the keynote address at the November 1 Writing Our Stories book release event in the Chapel of the Department of Youth Services (DYS) Vacca Campus in Birmingham. From Darkness to Light is an anthology of poems and short stories from the students at the Adele Goodwyn McNeel School at the DYS facility. Teaching writer Tony Crunk edited the book. Harold Abram Jr. is the cooperating teacher.

In the early morning hours of January 23, 2012, an EF3 tornado roared down Old Springville Road in Clay. Its widespread path of destruction included the Alabama Department of Youth Services (DYS) Chalkville Campus. Though the students and staff there suffered no serious injuries, many of the campus buildings sustained irreparable damage. The young women there were transferred to group homes or other programs for troubled teens. Thus ended Writing Our Stories’ fourteen-year run at Chalkville’s Sequoya School.

On a bright, sunny morning on November 8, 2012, a group of DYS and Alabama Writers’ Forum (AWF) administrators and staff, invited guests, and family members gathered in the administration building on the DYS Mt. Meigs Campus to celebrate the diligence of the Writing Our Stories (WOS) Chalkville team—teaching writer Priscilla Hancock Cooper, cooperating teacher Janet Dixon, and media specialist Mary Rencher—and the release of After the Storm, a compendium anthology of the work of WOS student writers from the fourteen-year Chalkville residency and the one semester that Cooper spent at the Working On Womanhood (W.O.W.) program in Tuscaloosa after the tornado.

Below is a photo gallery from the three events. Click the thumbnail for a full image.