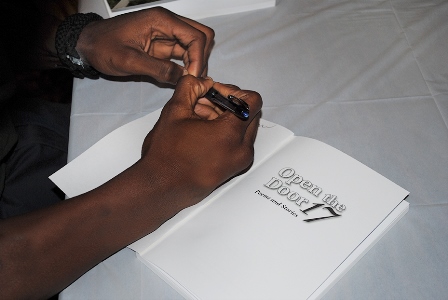 A student writer signs a copy of Open the Door 17.

“‘Adversity introduces a man to himself,’” said poet and educator Stephen Bray, addressing the assembled students, guests, faculty, and staff in the Chapel on the Department of Youth Services (DYS) Mt. Meigs Campus on October 23, 2014, for the seventeenth annual Writing Our Stories anthology release. “Many people argue that Albert Einstein said that; others say differently. The fact is that it really doesn’t matter who said it. Every man and woman who’s faced some type of adversity in their lives knows this statement to be true.”

A week later, an invited audience gathered in the Chapel of the DYS Vacca Campus to celebrate the release of The Long Road Home, the new anthology of poems and short fiction. Jason McCall, one of two 2015 Alabama State Council on the Arts (ASCA) Fellowship recipients in literature, delivered the keynote address.

Below is a photo gallery from the Mt. Meigs and Vacca events. Click the thumbnail to enlarge the photos & captions. (Photos by Cyndi Grimes-Alabama Department of Youth Services)