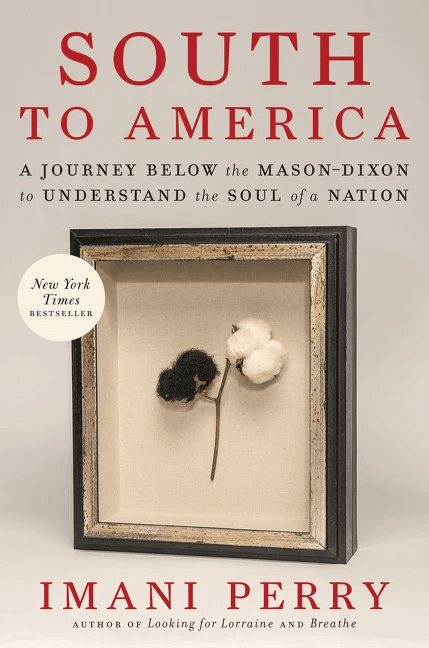 South to America: A Journey below the Mason-Dixon to Understand the Soul of a Nation
By Imani Perry
Ecco / Harper Collins, 2022
Hardcover: $28.99
Genre: Nonfiction; History; Travel
Reviewed by Edward Journey

Imani Perry’s South to America: A Journey below the Mason-Dixon to Understand the Soul of a Nation is an important and timely book. I savored most everything about it, but one passage stands out as my favorite: At a dinner, Perry has a conversation with Howell Raines, former executive editor at The New York Times and author of My Soul Is Rested, an oral history of the Civil Rights Movement. She tells him she’s writing a book about the South and he asks her where she’s from. When she responds that she’s originally from Birmingham, he asks what neighborhood. She says, “Ensley.” She writes that Raines’s “eyes widened, then glistened.” His response: “I’m from Ensley, too.”

My father was an Ensley boy; that’s where he and my mother met. I am well aware of how those Ensley ties bind.

In addition to being a Birmingham native, Imani Perry is a Professor of African American Studies at Princeton University, where she also teaches gender and sexuality studies, law and public affairs, and jazz studies. Looking for Lorraine, her biography of Lorraine Hansberry, was winner of the 2019 Bograd Weld Award for Biography. Her previous books include Breathe: A Letter to My Sons, Vexy Thing: On Gender and Liberation, and May We Forever Stand: A History of the Black National Anthem, among others.

To classify South to America as a “travel book” is apt, but misleading. Its scope is much broader than the typical travel book, but its structure falls into the category. Each chapter focuses on a specific city or Southern region. Perry’s journey begins in Harper’s Ferry, West Virginia, and ends with explorations of the Bahamas and Havana, underscoring her connections between the United States and the “Global South.” Early on, she cites Albert Murray’s 1971 travel narrative, South to a Very Old Place, as her direct inspiration. In most locations, she combines grim historical data with more contemporary events in the area. She explores what she calls the “Janus face” of Southern Whiteness, the nation, and American Christianity, contrasting the “God of slaves” with the “God of masters.”  She examines the hypocrisy of the religious right and its “veneration of the fetus and the degradation of the poor baby once born.” Her amazing ability to find connections throughout the book yields such coincidences as a direct link between William Jefferson White, the founder of Morehouse College in Atlanta, Booker T. Washington, the founder of Tuskegee Institute in Alabama, and Queens, New York, rapper Prodigy. A chapter called “The Clearing,” focusing on north Alabama, manages to ponder the impact of Nazi rocket scientist Wernher von Braun and his German crew, Dred Scott’s time on the plantation that is now Oakwood University, an HBCU, and the musical legacy of the Muscle Shoals Sound.

In Deep South by Paul Theroux (2015), a recent travel book that covered some of the same territory, the noted travel writer approached much of his subject matter with a patronizing air of condescension, viewing the South as somehow foreign from the rest of the United States. Southern native Imani Perry never falls into that trap; she knows the region and its people and delivers calm, meditative, and forceful reflections on what she sees, hears, and encounters in her travels. South to America is full of wisdom and common-sense insights. “At the same time as we track the beauty, we must witness the trouble,” she writes, adding, “[P]lease remember, while this book is not a history, it is a true story.”

Perry persuasively writes that “The consequence of truncating the South and relegating it to a backwards corner is a misapprehension of its power in American history. Paying attention to the South … allows us to understand much more about our nation, and about how our people, land, and commerce work in relation to one another.” Indeed, Perry’s narrative takes an unfiltered look at race and racism in the nation as a whole and combines insight into both the intrinsic values and the shameful histories of the places she visits and explores. She is a daughter of the South and a “movement baby,” with activist parents and a stunning network of Black and progressive colleagues for support and mentoring. Perry is cozy enough with Dr. Henry Louis Gates Jr. to call him by his nickname of “Skip.” She reminds us that the origins of what became the United States are in present-day Virginia, far from the Plymouth colony of Massachusetts. And it is in the rich history Perry provides that this book makes its largest impact.

As a White Southern man reviewing South to America, I frequently felt enlightened, but never did I feel accused. I fully acknowledge that my reactions and perceptions to Perry’s words are colored by my own experiences. In an introductory note, Perry explains her reasons for capitalizing both “Black” and “White” in her book, because “the categories … were made together. They are strangely symbiotic, opposing yet intimate.” In the chapter titled “Soul of the South,” Perry discusses the Republic of New Afrika, the 1960s vision of an independent Black-majority nation established in the Deep South. While Perry praises the movement and its leaders, I will admit that when I first heard about New Afrika in 1971, as a teenager living in Jackson, Mississippi, I was terrified at the prospect of being driven from my homeland. I am aware of the irony of that fear.

Perry analyzes the contradictions of a founding Southerner like the patriot Patrick Henry of “Give me liberty or give me death” fame. He was against slavery; he was a slaveowner. “Murderous hypocrisy,” Perry writes, “is an old American habit.” While acknowledging the importance of context, Perry does not view it as an excuse for intolerable acts and mindsets.

Perry’s observations cover all manner of territory, reflecting her prodigious range of expertise. Occasionally, she makes bold statements that merit further explanation. At one point, she informs her reader that “Motown is the baby of Jefferson County, Alabama, gospel,” later dropping the aside that Diana Ross “went back to Bessemer [a Birmingham suburb] for years in her childhood.” While open to debate, such observations are audacious and challenging. Perry traces the roots of the Southern vernacular “shotgun house” to its Haiti origins and imagines an encounter between writer Flannery O’Connor, who lived in Savannah for a time, and the Lady Chablis, Savannah’s most famous drag queen. It’s an amazing book on many levels. A paragraph about Southern bald cypresses – trees “older than Jesus” – that concludes a chapter on the Black Belt is one of the most beautiful pieces of meditative writing I’ve encountered recently.

South to America, above all, is a paean to the South, warts and all, that puts forward the legacy of the Southern Black Movement and the ways in which the region reflects the nation as a whole, for better and worse. Perry’s story is far removed from the mythology of the Lost Cause, and instead reminds the reader that the roots of the Black Panther movement were to be found in Lowndes County, Alabama. Perry’s pride in the South finds its locus in her home town, Birmingham. She provides a moving testament to the people who gather in Birmingham as she interviews Angela Davis, another Birmingham native. In an acknowledgment, Perry thanks her “father by rearing” who “never stopped telling me what a gift it was for me to be from Birmingham.” (I do have to quibble with the fact that Perry opts for “Alabaman” instead of the more common “Alabamian” when referring to natives of the state.)

South to America should be read by everyone who wants to better understand our time and place in history. Perry celebrates community, and her definition of her own community is broad, expansive, and inclusive. Ultimately, it celebrates her roots in Ensley.