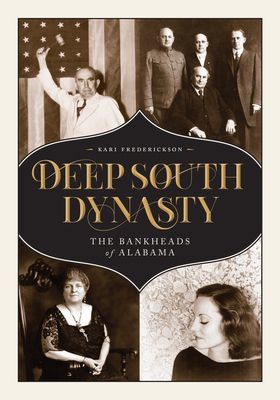 Most contemporary Alabamians know the Bankhead name from the eponymous tunnels, bridges, highways, national forests, and buildings found throughout the state and beyond. Tallulah Bankhead, a daughter of the Bankhead dynasty, was a talented actor who became a household name in the mid-twentieth century for her liberal politics and her frank, often ribald, personal style.

Perhaps fewer remember the details of the immense political influence of the Bankhead family, which began after the Civil War and spanned well into the twentieth century. Tallulah’s paternal grandfather, John Hollis Bankhead, and two of his sons, John Hollis Bankhead Jr. and William Brockman Bankhead, were major forces in Washington. At least one of them was always in the U.S. Congress from 1887 to 1946. In addition, one of John Hollis Bankhead’s daughters, Marie Bankhead Owen, was director of the Alabama Department of Archives and History from 1920 to 1955. These four Bankheads are the focus of Kari Frederickson’s Deep South Dynasty: The Bankheads of Alabama, with occasional contrasting sidetracks into Tallulah’s outrageous life and show business career.

Kari Frederickson specializes in Southern politics as a professor of history at the University of Alabama. She previously wrote Cold War Dixie: Militarization and Modernization in the American South and The Dixiecrat Revolt and the End of the Solid South, 1932-1968. Her new book, Deep South Dynasty, is an essential addition to Alabama history.  The introduction, “Family Biography as Regional History,” is an effective summation of the book’s impact; Frederickson provides valuable context into how the South affected the Bankhead family and, also, how the Bankhead family impacted the South and the nation.

The Bankhead family provides a challenging history in a twenty-first century context. An impressive and formidable list of accomplishments is stained by the sins of the fathers in their dependence on slavery and the family’s reluctance to rebuke it. Perhaps the most challenging character is Marie Bankhead Owen, who takes on the mantle as director of the Alabama Department of Archives and History when its previous director, her husband Thomas McAdory Owen, dies young. Her accomplishments at the department are impressive and Alabama’s department becomes a national model, but she is diligent and unrepentant in her quest to immortalize the Confederate Civil War history of the “Lost Cause.” The Southern goal in the Civil War was a “lost cause,” by any reasonable analysis; Marie’s fatal flaw is the belief that it was a noble cause. Her brothers show signs, over time, of moving on; Marie, the most recalcitrant rebel in the family, does not.

One of the things that makes Frederickson’s book necessary is the clear way in which she designates the distinct accomplishments of the Bankhead men. The patriarch, U.S. Sen. John Hollis Bankhead, is known as the “Father of Good Roads”; his contributions to federal support for national infrastructure are ground-breaking and lasting. Of the sons, Sen. John Hollis Bankhead Jr. has a strong record of backing Franklin Delano Roosevelt’s progressive and essential “New Deal” legislation. Rep. William Brockman Bankhead, Tallulah’s father, is known for shepherding farm bills and ground-breaking legislation such as the “Fair Labor Standards Act” through Congress. When William B. Bankhead becomes Speaker of the House in 1935, his ability to negotiate across the aisle is essential to legislation that helps the United States recover from the Great Depression. The Bankhead brothers often break with their Southern Democratic colleagues in Congress to ensure passage of FDR’s New Deal agenda. When John Hollis Bankhead Jr. dies in 1946, Newsweek magazine opines that “Congress would not be the same without a Bankhead.”

Despite the Bankhead brothers’ progressive stance over New Deal legislation, Frederickson notes that they were always careful to stress that their legislation was geared to the protection of the rights of whites; their efforts often exclude protections for the descendants of formerly enslaved people. Collaterally, that stance also targets the rights of the poor white sharecroppers and tenants who make up a majority of the southern white population at the time.  The Bankhead family, while posing as Southern farmers, was of the landowner and industrialist class, advocating the interests of those who were often branded as “big mules” in twentieth century Alabama politics.

The Bankhead saga is a compelling and complex story that Frederickson examines with the detail and tact it deserves, offering valuable insights into other prominent Alabama politicians of the era including Hugo Black, Bibb Graves, Richmond Pearson Hobson, and Oscar Underwood. Marie Bankhead Owens, in her thirty-five years as director of the Alabama Department of Archives and History, uses her fellow members in the United Daughters of the Confederacy as spies to ensure that “appropriate” history was taught in Alabama schools, redesigns the state seal, changes the state motto to “We Dare Defend Our Rights,” writes historical plays and Alabama history books for schools, and secures funding for an impressive building for the Department of Archives and History. Her weekly newspaper column, “Talks with Girls,” was geared to “young elite white women and girls.” Frederickson observes that these columns “assumed that most [of the readership] had domestic help, had ‘society obligations,’ and took vacations.” All the while, Marie keeps an eye on the antics of her niece, Tallulah. Marie springs into damage control mode after Motion Picture Magazine publishes a 1932 profile of Tallulah, in which the actor laments her lack of romantic attachment, wailing that “Six months is a long, long time. I want a man!” In a letter, Aunt Marie scolds her niece, writing that the article sounds like “the yapping of a hot canine locked up in a kennel,” and signs off “with love and grief.”

Frederickson’s book is exhaustively researched, clearly presented, and immensely readable. Much content is presented episodically rather than chronologically and I found myself flipping back to find out how certain events relate in time to others. Still, Deep South Dynasty provides an integral overview of a part of American history spanning the Civil War and World War II. Its focus on one very powerful American family, with all of its conflicts and contradictions, gives an immediacy and vibrance that make Deep South Dynasty a compelling and welcome addition to American political history.