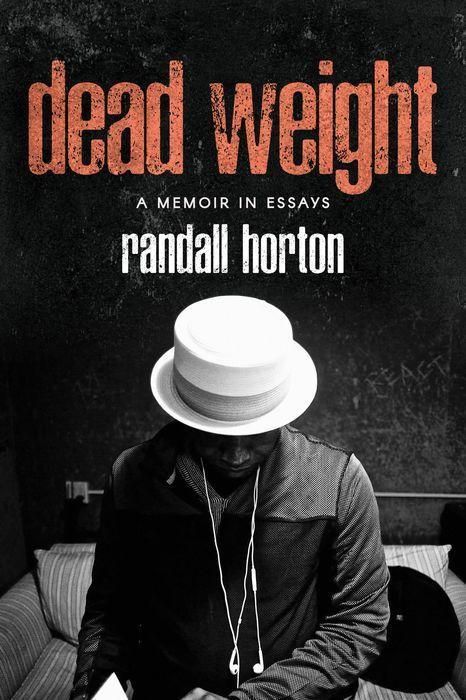 After finishing the final page in Randall Horton’s Dead Weight: A Memoir in Essays, one word resonates: survivor. What would have killed the average person—premature birth, drug addiction, drug smuggling, homelessness, incarceration—he has outlasted. With Dead Weight, Horton has put those experiences into perspective and is now determined to outlive them.

The book’s opening chapter is destined to become a classic. Horton, on a park bench in New York City, engages in a conversation with an Elizabeth Catlett statue dedicated to the protagonist in Ralph Ellison’s Invisible Man. Horton deftly describes in third person narrative his premature birth in 1961 Alabama and what came afterwards:

The wound is deepened by all the white babies permitted to have their mother pick them up, hold and hug them by the butt, stare into their inquisitive eyes. . . The exception is the little spot on the top floor. His mother is prohibited from walking up from the basement to participate in this bonding ritual because of the Jim Crow segregation ordinances (p6).

What Horton does with this one scene is a summation of how white supremacy affects the quality of black life in America from the cradle to the grave. Whether its healthcare, education, politics, the criminal justice system or athletics, progress has been made, but the nature of a system that values white life over Black lives remains unchangeable. Even cemeteries, especially in the South, are arranged by racial constructs.

The pernicious nature of white supremacy has the ability to affect the quality of Black life for generations. Horton touches on his family background and one of its patriarchs, Big Seventy, who sold moonshine during Depression years, and who was eventually incarcerated and served on a chain gang for trying to provide for his family. Or Rosie Lee, his grandmother, who “sold liquor, ran numbers, paid off the police and rented rooms on-site for people to fuck” (p12). This is the backdrop of Horton’s childhood, and to outsiders, his grandparents would be considered criminals. But for him, as he posits on page 26: “Illegal meant the opportunity to even the playing field, to buy clothes and drive a car and pay the rent or mortgage without worrying if the minimum-wage paycheck would cover the monthly bills. After years of illegal activity, I was given a prison sentence for crimes against the state. Had I been judged by a group of my peers who understood the struggles created by so many facets of racism, I would have been pronounced innocent and free to go.”

The only thing heavier than the dead weight of seven felony convictions is the stigma in the eyes of others. Horton has paid his debt to society, but there is a portion of society who remains unmerciful and unforgiving when it comes to felons. One would think that the dominant society would be the one demanding interest on a pound of flesh, instead in Part 2, Horton chronicles his experiences with historically black colleges and universities (HBCU). Howard University, known as “the Mecca” because it boasts a student body in excess of 15,000, refused him re-entry to complete his undergraduate studies after incarceration, and once he attained his bachelors, MFA and PhD., Central State University, the first university to be owned and operated by blacks, extended and then rescinded a Distinguished Scholar in Residence position. But Horton has outlived this stereotype and has created a language that defines who he is on his own terms:

I’ve been calling myself ex-felon, ex-convict, and ex-prisoner because, as an advocate, a real-life example works better than a hypothesis . . . I know that I am not an ex-anything. It took time, but I eventually realized that my thinking was a setup, the way the narrative was supposed to be, that even my greatest achievements would echo and reaffirm the system . . . I’m not going to chase my own tail, nor will I continue to use language from the handler’s toolbox to deconstruct and define my own existence (pp. 47-49).

Thank God for poetry and its redemption nature to meet you where you are, examine how you got there, and allow you to path a tomorrow you never knew existed. Horton’s first encounter with poetry was behind prison walls, and since his release, he has attained three degrees, numerous book awards, a tenured professorship, and has become an advocate for prison reform. He regularly visits juvenile detention centers to warn youth of the errors of his ways and gets involved in cases where the criminal justice system also takes advantages of poor whites such as Karen McNeil.

Karen had been arrested in 2015 for driving on a revoked license. She was initially put on four months’ probation and ordered to pay $426 in fines and fees, $45 a month to the for-profit company contracted by the county to supervise her, and $45 for each random drug test she was required to take, even though her offense had nothing to do with drugs (p. 70).

The arts in general, and poetry in particular, puts one in touch with his or her humanity, and Horton comes to terms with the wrecking ball he was upon relationships during the 1980’s and 1990’s. He chronicles the damage he did to himself, the pain he caused family and laments the two women, Jo-Jo and Pam, he used to smuggle drugs into the U.S. But the most damage was done to the Black community. Because of the crack cocaine plague of the 80’ and 90’s, thousands of black men became fodder for the prison industrial complex, numerous addicted black women abandoned their homes forcing children to fend for themselves. These many years later, the community has not fully recovered and may never do so. The American government’s involvement in the cocaine trafficking against its own citizens (Iran Contra, anyone?) is well documented. However, the CIA’s or the FBI’s wicked machinations do not excuse Horton’s involvement. He was complicit in the “many thousand gone” and that has to be, for Horton, who is a student of black history and is steeped in black culture, the most burdensome of dead weights to outlive.

Dead Weight is a mirror held up to the underbelly of America. It is gritty, unflinching, violent, and visceral. It is an aspect of America that we do not want to acknowledge. We do so at own peril. Drug use, drug smuggling, and the inner workings of prison life are the underbelly of a society that waves the American Dream before the faces of its citizens yet denies equal access to that Dream oftentimes to its darker faces. But Dead Weight is also beautiful, sincere prose. From page 115:

If I were to address that long line of people I have hurt, I might begin this way: Forgive the echoes of guilt and time’s continuum, which refuses to erase a memory. Forgive the gun and the squeezed trigger. Forgive the falsehood of masculinity and the bullets penetrating the car window, missing a newborn in the backseat. Darkness cloaked us in its vice grip--forgive me, but I was blind.

Dead weight builds in myriad miscalculations, mistakes, transgressions, and there are always decisions we’ve made that we wish we could take back. Horton teaches us that it’s easy to ask others, or even God, to forgive us, but the ability to forgive ourselves for our past misdeeds is the most difficult. With the honesty and integrity that you find among the pages of Dead Weight: A Memoir in Essays, Randall Horton has given us a blueprint on how to do just that.

Poet, fiction writer, educator and social critic, James E Cherry is an adjunct professor of English at the University of Memphis-Lambuth. His latest novel, Edge of the Wind, a 2016 Foreword Reviews Book of the Year Finalist for Fiction, will be re-released from Stephen F Austin State University Press in 2022  His most recent poetry is anthologized in Black Fire This Time (Willow Books, 2022). Cherry resides in Tennessee.