The Last Slave Ship: The True Story of How Clotilda Was Found, Her Descendents, and an Extraordinary Reckoning 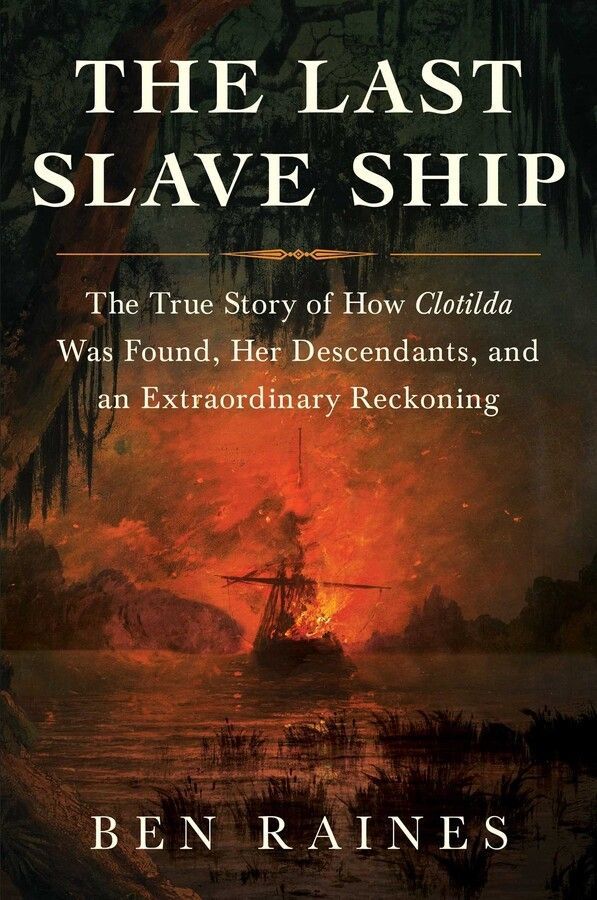 The Last Slave Ship: The True Story of How Clotilda Was Found, Her Descendants, and an Extraordinary Reckoning
by Ben Raines
Simon & Schuster, 2022
Hardcover: $27.99
Genre: Nonfiction
Review by Frye Gaillard

On April 10, 2018, Ben Raines, in scuba gear and a wetsuit, slipped into the murky waters of the Mobile-Tensaw River Delta. Spring floods had stirred the muddy bottom, and the water, he remembered, “looked like chocolate milk.” Even with his mask he was diving blind. Soon, his foot brushed against what felt like a wooden plank, and Raines reached down and began to tug. The plank came loose and he rose to the surface with a five-foot piece of what turned out to be the Clotilda, the last slave ship to arrive in America.

Now, Raines, a heralded environmental reporter formerly with the Mobile Press Register, has written a powerful book about the history of that ship – a legacy of oppression, bravery, and environmental injustice – and now, he hopes, of redemption. The story begins with a fateful bet by a 19th century Alabama riverboat captain named Tim Maeher.

In April of 1859, Maeher and some of the passengers were discussing the future of slavery. As a pro-slavery zealot, Maeher chafed against the effects of a fifty-year-old law, banning the importation of slaves from Africa – a piece of legislation, he knew, that was driving up the price of human chattel sold within the boundaries of the United States. To him, it was a simple matter of supply and demand. Maeher, becoming more animated, placed a bet with his passengers that he could skirt the law and import more Africans, thus doing his part to increase the supply and drive down the price. The Southern economy deserved no less.

For his high-risk mission he chose the Clotilda, a five-year-old schooner built for speed, and hired a man named William Foster to captain the ship on its transatlantic voyage. In telling the story of what happened next, Raines pays careful tribute to four women writers – Emma Langdon Roche, Zora Neale Hurston, Natalie Robertson, and Sylviane Diouf – who kept the story of the Clotilda alive. Of those writers, Hurston, perhaps, painted the most vivid portrait of the slave trade, a brutal reality with its roots in Africa. A native Alabamian raised in Florida, Hurston is best-known in literary history for her iconic Harlem Renaissance novel, Their Eyes Were Watching God. But she was a young folklorist in 1927 when she began to interview Cudjo Lewis, the last survivor of the Clotilda voyage.

In multiple conversations, sometimes prodded by gifts of peaches, watermelon or ham, Lewis offered an idyllic picture of his African upbringing, interrupted brutally when he was a young man of 19. That was the year, 1860, when an army of warriors from the African kingdom of Dahomey descended on his village, led by a shock troop of women fighters. Based on Cudjo’s conversations with Hurston, Raines describes the dreadful attack:

“Cudjo says the killing came so fast that the elderly who tried to flee were caught as soon as they emerged from their homes. All around, headless bodies, young and old, poured blood into the streets. The air was filled with the iron stench of blood, and with screaming, from both the dying and the war cries of the Amazons marauding through the streets.”

As Hurston herself later wrote about the horrible truth of Cudjo’s account, a truth that applied to millions of those sentenced to the impossible cruelties of slavery: “the inescapable fact that stuck in my craw was: my people had sold me and the white people had bought me…. It impressed upon me the universal nature of greed and glory.”

There is a measure of glory in The Last Slave Ship, though it comes on the other side of enslavement, a fate that the 110 Clotilda captives endured for five years – from 1860 until the end of the Civil War. Cudjo is clear about those brutalities, including the dreaded Middle Passage across the Atlantic in the hold of a vessel barely 90 feet long. For five years after their arrival the Africans worked in the fields from before the sun rose until after it set. “But we don’t grieve about dat,” said Cudjo. “We cry ‘cause we slave.”

When freedom came, many of the Clotilda captives settled in a swampy area along the Mobile River. “Almost immediately,” wrote Raines, “in an extraordinary act of self-governance, the group began to build a community for themselves ruled by the social strictures they had grown up with…” For a time, Africa Town, as it came to be called, flourished. By the 1920s, it had grown to a community of 1,500, one of the largest in the nation governed by African Americans. By the 1970s, the population had reached 12,000: shady streets,” as Raines describes it, “… lined with tidy wood-frame and brick houses and home to a vibrant commercial district.”

Even during this remarkable period that lasted for more than a hundred years, the story was not without pain. The forces of segregation and disenfranchisement affected African Americans all over the South. But the fall of Africa Town lay, ultimately, in environmental pollution so intense that cancers of multiple kinds began to ravage the community. As Raines explained, chemicals from heavy industry, including two paper mills on the edge of the community, “are linked to cancer, birth defects, fertility problems, kidney and liver damage, nose and throat irritation, asthma, and loss of hearing and color vision.”

In recent years, the population has declined and vacant lots scar the landscape. Raines, however, ends his evocative narrative – so full of cruelty and sadness, with a history of heroism in between – on a note of hope. He believes his discovery of the sunken ship, since confirmed by marine archeologists, has begun to trigger a spirit of reconciliation. A descendant of Captain William Foster recently visited Africatown, asking forgiveness from the Clotilda families. And in the African nation of Benin, where two tribes – heirs to the enslavers and the enslaved – share the same land, there are efforts to reach across the divide.

One thing is both hopeful and certain. Because of a long line of writers like Raines, and a legacy of aspiration forged resolutely by the Clotilda captives, their story can no longer be ignored.

Frye Gaillard, writer in residence at the University of South Alabama, is author of A Hard Rain: America in the 1960s.