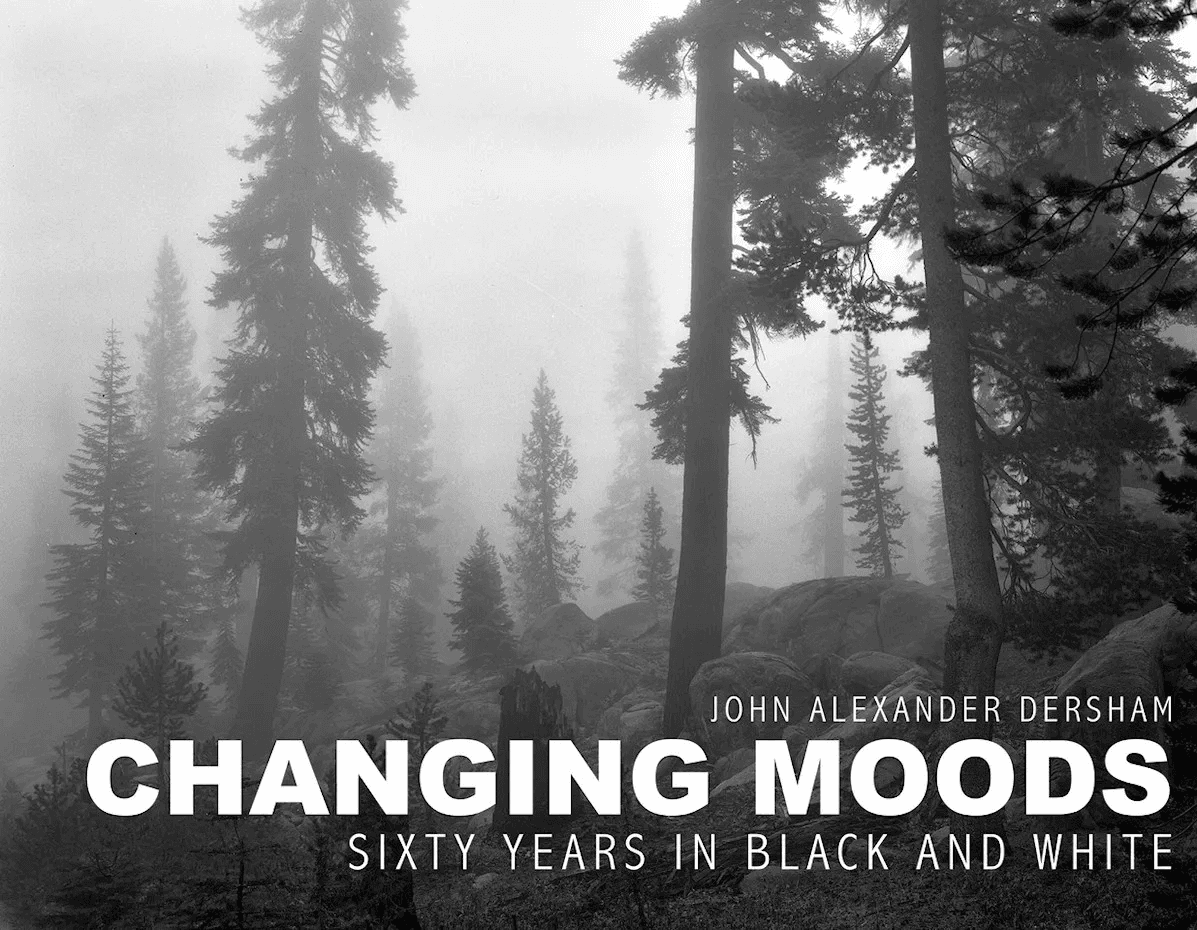 John Dersham is in love. His romance sprouted over sixty years ago. Since then, it has only grown. His new book is an autobiographical love story that chronicles the majority of his personal and professional life as a master photographer. Changing Moods: Sixty Years in Black and White shares six decades of black and white photographs with an emphasis on images produced by large-format film cameras.

When I first received Dersham’s book I expected to see plenty of richly textured, black and white landscape photographs along with some human portraits. This expectation was fully met, but I was surprised to find that the book is as much an autobiography as it is a photo album. While most monographs stay strictly on the topic of one body of work and omit any details from the author’s personal life, Changing Moods tells Dersham’s love story with photography as an essential thread woven into the whole of his existence to this point.

Chapter 1 is appropriately titled, “The 1960’s: The Passion Begins," and Dersham starts his narrative before he was born, describing the background of his parents’ marriage, then his early life in Pennsylvania, New York, and Missouri. He mentions November 1, 1960 as the day he took his first picture, and from then on Dersham continued to expand his knowledge of the craft by working in photo labs and using professional camera equipment. The photos in this chapter show a rawness that can only come from the youthful energy of experimentation. Dersham is clear that his main interest has always been landscape photography, but some of the most enjoyable moments in this chapter come from pictures that are completely devoid of any fear of failure. The best example of this is a page labeled, “Columbia, Missouri, Ann Payne with my new 1970 351-cubic-inch Mustang coupe, October 1969.” Dersham had driven his new sports car into a field and photographed it at various angles while a young woman posed in or on the car. This could be seen as the shallow fantasy of a teenage boy, but I believe these pictures illustrate Dersham’s coming-of-age, one that is essential to the autobiography of a complete photographer.

Dersham moves on to the 1970’s and describes it as his favorite decade. He tells stories of moving to Nashville, starting a career at the Colorcraft Corporation (which would become Eastman Kodak), getting married, and becoming a father. He tried his hand as a singer/songwriter and managed to get a song on the radio. His immersion into the Nashville music scene also yielded opportunities to take photos for band portraits, album covers, and concerts. Near the end of the decade he got back into large-format photography and started exhibiting his work in Nashville. The photographs in this section are records of a transition period in Dersham’s life. There is a clear elevation of technical skill in composition and printing, as well as a heightened intentionality in his choice of subject. For Dersham’s work, the 1970’s was a decade of growth that would continue into the following years of landscape photography.

The next two decades are marked by a fully matured professionalism in both Dersham’s photography and career. During these years he was transferred from Nashville to Philadelphia, Pennsylvania then to Hattiesburg, Mississippi and finally to Birmingham, Alabama. His photography benefitted from his regular business trips that became a significant part of his life. While on the road, Dersham would take his large-format camera and stop to take a picture whenever a good opportunity presented itself. During these years he was taking an average of 2,000 large-format shots per year. Depending on who you ask this may or may not seem like a lot. I have taken over a thousand photos on a single trip before, but you have to remember that this is common in digital photography. The process for large-format photography is completely different. Understanding this contrast, it’s easy to be impressed by the volume of work Dersham was able to produce during these years.

Throughout the book Dersham discusses the difficulty of large-format photography and the lengths to which he would go to find the perfect shot. For example, he leaves his room at 3:00 a.m. to set up his equipment long before sunrise at Yosemite National Park. After getting the best shot, a group from a large-format workshop shows up, already having missed the morning fog and sunlight. There are many examples like this in the book that show how important process is to Dersham. The final product is important of course, but Dersham’s love for the medium goes beyond capturing a beautiful framed photo. So, even though he acknowledges the benefits of digital photography, its arrival was not welcomed, and after thirty years with Kodak, Dersham was one of many employees laid off during the early 2000’s. Life changed and he went into the tourism industry, but his love for large-format photography remained. Dersham would regularly teach film photography workshops and exhibit his photographs in a number of different venues, continuing up to the present day.

Many of Dersham’s photos from the later years are taken around the southeastern United States. These photos seem to portray an aging region that mirrors the changes happening in his own life. It’s no coincidence that every portrait in this section depicts someone with gray hair. Note the contrast to the young woman with his new Mustang at the beginning of the book. This is the full life’s love story of a master photographer who kept the passion alive even through the dark years of a changing industry.

The last written section is entitled, “Why Shoot Film?”, and Dersham’s final words are spent in an effort to convince the reader to try film photography, maybe even fall in love with it. Film photography is often inconvenient and sometimes burdensome, but to Dersham the reward is fully worth every struggle. In his own words: “I loved the whole process of film. I loved not knowing what my pictures would look like until I processed them. I loved the entire crafty darkroom experience and the hard work that went into making the images good. The extra hard work of large format photography is what I loved best.” Through six decades, Dersham’s romance with film photography never wavered, and this commitment to the craft should be an example to all aspiring photographers.

Ryan Meyer is an artist, designer, and educator from Birmingham, Alabama.