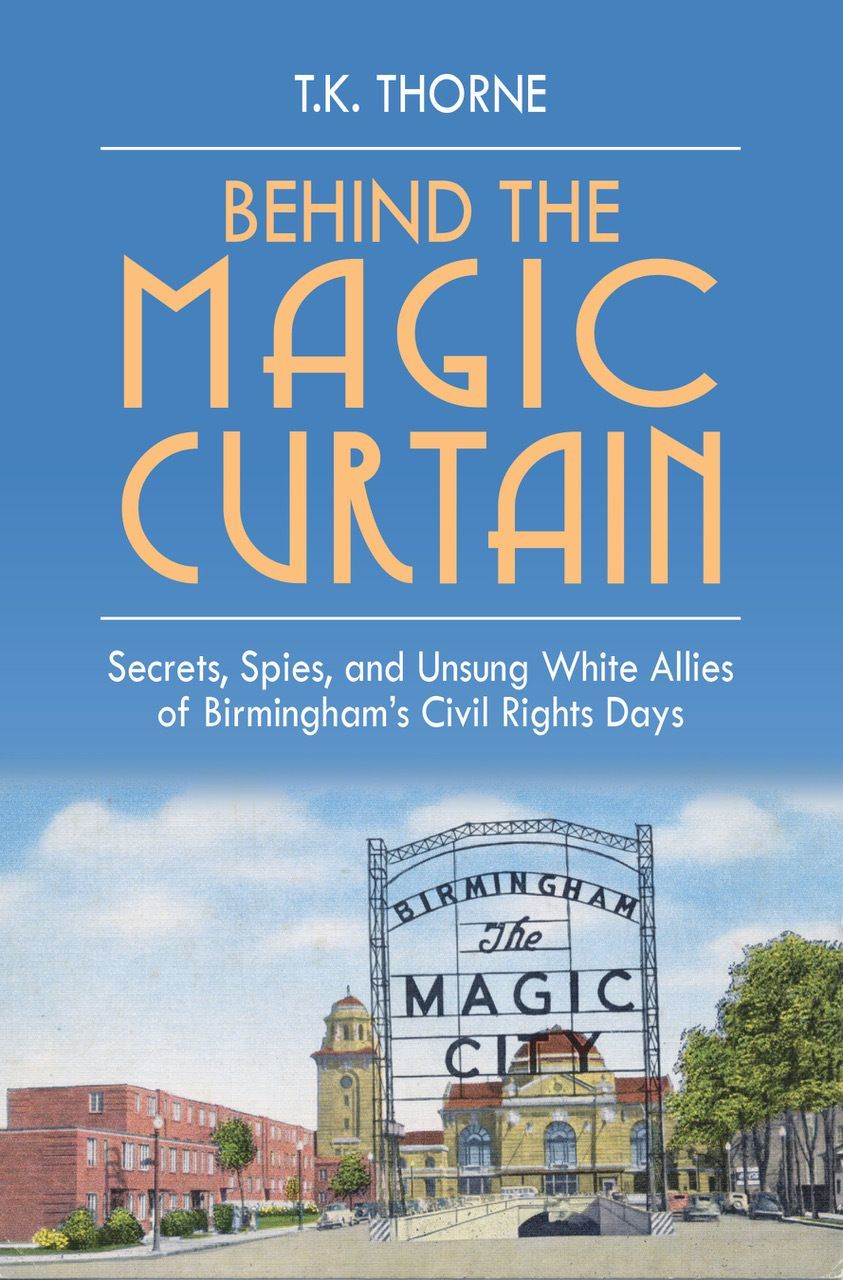 Growing up in Deep South Alabama, I knew little of what had been going on in “The Magic City” when I arrived there in the fall of 1963 to begin my junior year at Birmingham Southern College. I had followed the Civil Rights Movement through newspapers and television, but it all seemed so far away. Now it wasn’t.

I had to learn quickly. Arriving on campus, students were given advice and cautions – when it was safe to leave campus, where it was safe to go, which gatherings should be avoided.  It was not like we were cloistered on a hilltop retreat; we came and went pretty much as we pleased. Yet in our minds was planted the warning – things were going on “down town” and we should be on our guard.

All of this was brought back to me reading T.K. Thorne’s Behind the Magic Curtain.  In clear, crisp prose the author recalls names, places, and events, half remembered but never forgotten. Like the September Sunday morning when I walked out of my dorm and heard a dull “thud” from down in the valley. “Blasting at TCI” one of my friends said, in reference to the frequent “booms” that came from the furnaces of Tennessee Coal and Iron.

But that wasn’t it.

It was a bag of dynamite set off in the basement of the Sixteenth Street Baptist Church where some children were getting ready for Youth Day. In the rubble they found the bodies of four black girls.

By the end of the day the news had reached us, and it seems it had reached everyone else.

T.K. Thorne’s is an excellent account of those troubled times, of the men and women who created the trouble, and those who got the city through it. It is a fair, balanced, readable study of the Civil Rights Movement from the perspectives of the many sides that there were trying to control it.

There are few better places to study those “Movement Days” than Birmingham. Hardly any other city in the South, perhaps in the country, had such a mixture of races, economies, interests, wealth and poverty living in close proximity, hemmed in by prosperous suburbs and white-flight neighborhoods. The author describes the protagonists, places them in their proper contexts, and enables the reader to understand the tensions at work back then. Or in my case, and I suspect in the cases of many others, it helps readers remember.

There are the known participants, like Police Commissioner “Bull” Connor, a villain right out of central casting. And the less well known, like Journalist Tom Lankford whose reports and pictures cataloged what was happening. There are the organizations you would expect, like the Klan and the Citizen’s Council, along with those on the other side that worked behind the scenes to bring peace to a shattered city. There are ministers, priests, rabbis, reporters. There are students, teachers, and parents raising children to be good citizens in a city where examples of citizenship were often hard to find.

All of this is here, for us to read and remember, and not to forget.

Harvey H. (“Hardy”) Jackson grew up in Grove Hill, Alabama. He attended local public schools, Marion Military Institute (AA, 1963), Birmingham Southern Collee (BA 1965), the University of Alabama (MA 1966), and the University of Georgia (PhD 1973). He has taught in colleges and universities in Florida, Georgia, and Alabama. He is the author, co-author, or editor of fourteen books on various aspects of Southern history. After over 50 years of teaching, he retired Professor Emeritus from Jacksonville State University. He lives in Seagrove Beach, Florida.