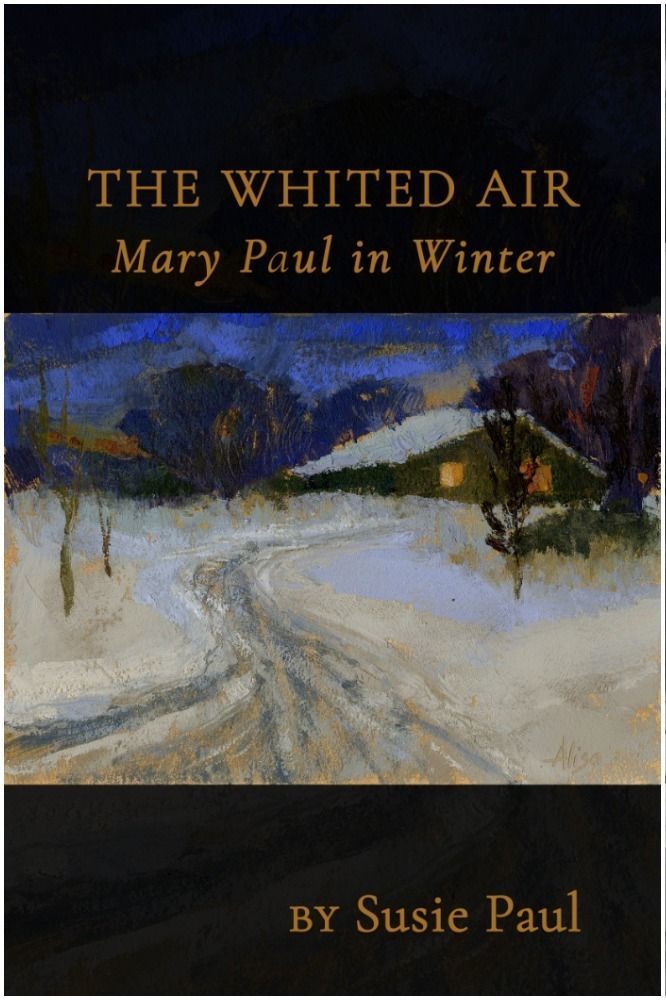 By happy accident, the kind that comes to poets who are alert to possibilities, Susie Paul learned of a nineteenth-century woman named Mary Paul. Although there is no genealogical relation, the poet clearly felt a relationship of affinity with the young woman whose voice she inhabits so effectively in these poems.

As we learn in the Introduction, Mary Paul grew up on a farm in Massachusetts but moved to the town of Lowell to work in a textile mill. Seeking a larger life and wanting to earn money to support herself and help her family, she left the known behind and went to live in a boarding house with other young mill women, writing letters home to her widowed father. Fragments from Mary’s letters (held by the Vermont Historical Society) are woven into the poems, creating a sense of intimacy and immediacy, bringing alive the concerns of a woman who lived one hundred and fifty years ago.

The “whited air” of the title (a quotation from Emerson) is a dual reference to Mary’s life on the farm and in the mill: at home, the air is white with snow falling on a natural landscape, but at the mill, the air is white with lint. Mary looks for continuity in this whiteness but finds only difference; in the mill, the “world is upside / down” as the “snow” instead of falling rises from the machinery to float in the air, a seeming displacement of something as basic as gravity (“Snow”). Running through the poems is the contrast between natural time, the rhythms of nature, and clock time, enforced at work and in the boarding house by bells.

Newcomers to the Industrial Revolution, the young women are servants to their machines, figured as male: “He bites; I / serve him” (“No One Asks”). Their lives may be, or become, materially better, but as readers we are asked to ponder what they have gained, and what lost. Perhaps, like Mary Paul, we can sometimes say of ourselves, “The tolling bells / have made of me / a clock” (“The Bells”). It doesn’t seem too far a stretch to think about the “bells” of our various electronic devices and how they distract and corral us, how the rings and dings of notifications, supposedly keeping us up-to-the-minute, detach us from deeper, out-of-time experiences: the conversation we’re having, the book we’re reading, the richly various world of which we’re a part.

The other character in this book, an invented Irish immigrant called Brigid, is also based on Paul’s historical research, and the four poems in her voice serve as a counterpoint to the nineteen in Mary’s voice, offering another perspective on the mill and the other workers. To Brigid, Mary is “prim” and stiff-backed, one of the “Puritan misses” she knows look down on her. Brigid prefers her earthy shanty to the crowded boarding house where girls are packed in their beds “like tinned fish” (“Queen of Heaven”). In “Irish Need Not Apply,” Paul plays with a line break in the first lines of the poem as Brigid cleverly expresses that prejudice: “Irish need not apply / themselves to subtle thoughts, / to contemplation of anything beyond / the rot of the potato, ….”

Mary and Brigid, both being young women of marriageable age, tell of their longings and their fears as they navigate a new independence, with flirtations, hopes for love, and the experience of sexual harassment—for Mary in a house where she used to work, and in Brigid’s case, from the mill’s overseer (“Touch,” “Peddlers,” and “Overseer”). What does it mean to be good, in these new circumstances? In “Mirror,” Mary writes, “…Mrs. Angell gossips / I am bad / because I did not stay / in her service. // But here the overseer says I am good / and he will do right / by me.” But will he? And how are the young women to navigate their emerging sensuality? In one scene in the poem “Touch,” Mary writes of how the young women “wash each other’s hair . . . / our fingers kneading / the clotting cotton dust / away.” It is almost too much comfort for some: “Suthera Griffith wept / once when her turn came.”

The book ends with a brief poem titled “Spring,” the season of growth and rebirth, giving a sense of possibility for Mary’s future beyond the mill. Near the end of the book, in “Astral,” we see how desiring “a life beyond / the sealed windows / of the mill” leads the young women to “hang / our poems, stories, picture / post cards” so that “the sun / shines through them.” Mary knows that the factory might look like an “[e]nchanting” snow globe with “pretty girls” from outside but that the snow inside is false and “does not / melt away.” She has realized that coming to the mill was less of an escape from being “penned” on the farm with her ailing father than she had hoped, but there is a sense that she will escape the mill as well and continue her search for that larger life she craves.

At twenty-three poems, this is a slim book, but Paul’s evocation of the young women’s observations and aspirations gives it a sense of depth. Finishing the book, I felt I knew Mary and found myself hoping for her success in life. I hope, also, that Susie Paul will be bringing us more resurrected voices in more poems, and I look forward to reading them.

Jennifer Horne served as the twelfth Poet Laureate of Alabama, from 2017 to 2021, and is the author of three books of poems and a collection of short stories as well as the editor or co-editor of a number of anthologies. Her latest book is a biography of Alabama writer Sara Mayfield.