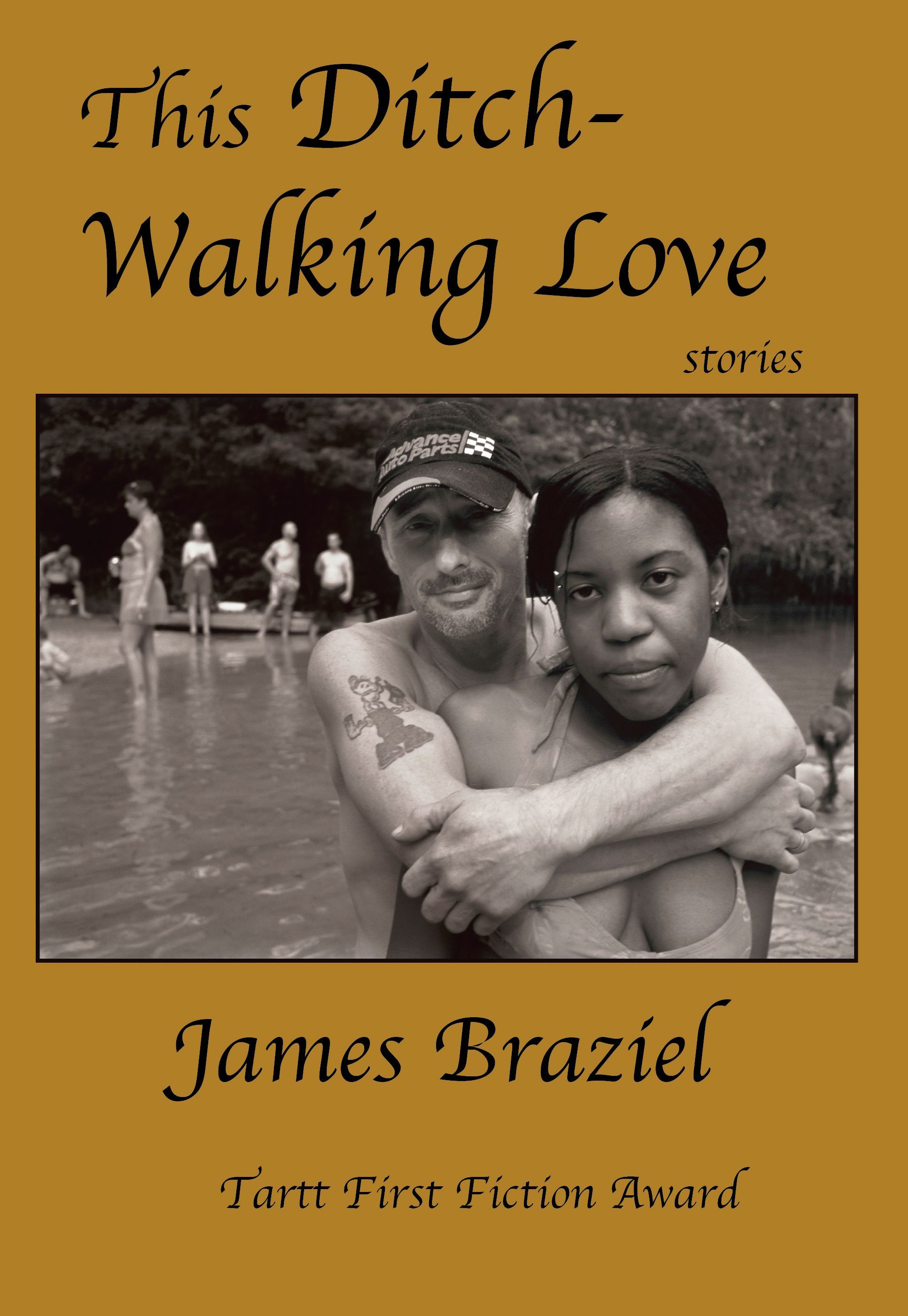 James Braziel’s This Ditch-Walking Love is an impressionistic collection of short stories and sketches exploring themes of strife and defeat in rural Alabama, near the Locust Fork. The location is described as “not a county of rivers – just rills and rivulets that widen into creeks.” Some stories in the collection are hypnotic collages of time, as episode follows episode in an order that, while not always chronological, is always appropriate to the narrative.

This Ditch-Walking Love is the recent recipient of the Tartt First Fiction Award, given by Livingston Press for a first short story collection. James Braziel, who is also a poet, has previously published two novels, Birmingham, 35 Miles and Snakeskin Road, interrelated dystopian novels set in a future South decimated by climate change. He teaches creative writing at the University of Alabama at Birmingham.

The characters in This Ditch-Walking Love are frequently in dire and hopeless circumstances, but the various narrators’ voices are so matter-of-fact that there’s almost a sense of peace lurking beneath the surface. Some writers might resort to stereotypes dealing with such characters; Braziel chooses to emphasize their native wisdom, stoicism, and occasional glib comments. Among the most glib is “Chick” Pea, the narrator of “The Booby Trap,” one section of the three-part selection “Saplings.” After Chick has been forced to play hooky from school for a week, she laments, “I’ve never missed the parts of speech so much.” Missing her dad and stuck with female relatives in a house full of grief, Chick, who often shows wisdom beyond her years, decides  that “knowledge always wins out over want.”

Braziel has a thrilling mastery of language and is incisive in character development. He tells the reader just enough about his characters and their interactions to facilitate a more complete understanding beyond the page. Judy, the impetuous young narrator of “Wanting a Lover Man,” hears a reference to Chaucer and remembers “something about a wife taking a bath and Chaucer when I was in school. But I’ve been out for two years.” Later, accepting a ride from a community college instructor she knows slightly, she makes a catty reference to Chaucer. “Since we were alone,” she muses, “I wanted him to know I was not afraid of knowledge.” Like so many of these stories, “Wanting a Lover Man” gradually builds an unnerving tension to a harrowing climax.

Longing and awe fill the evocative imagery and descriptions of landscape. Some of the selections are concise prose poems capturing a moment in time, almost like a mirage. “Jick’s Chevrolet” is a meditation on a rural car dealership where “you’ll find all the pretty cars you’ve never owned”; “Ferris Wheel,” and its description of the titular object, half-buried in a field, dangles the promise of lyrical escape. Escape, a theme throughout Braziel’s work, is epitomized for a moment in the story “Hawk,” as two brothers watch the hawk that “knew what breath was and had invented it …” Escape is also a theme in “Asleep in Peggy’s Grace,” in which a couple who have managed to escape their families are now trying to escape a flood.

In “Vittate,” a woman describes to a lover the time she was caught up and scarred in a roll of barbed wire – “A little tornado with me in the eye.” “Body Forever” is a hypnotic drive through Birmingham – “B town” – and its abandoned factories that are “broken out and spray-painted on.” In “Last Time Bo Played the Blues,” the narrator, enchanted by the transformative skills of the four-fingered bluesman at the “kickoff of his tri-county tour,” recalls the time his ex-girlfriend threw a Fuzzy Navel in his face.

“Cheat Road,” one of the longer stories in the collection, is a restrained, low-key thriller exploring entangled love affairs and joyless sex during “the summer Hill Pinson died.” The narrative deftly mingles love triangles, adultery, murder, and racial terrorism. In “Tulipwood,” the racism is more overt in the aftermath of a 1910 lynching by “Smoke Risers,” local Klansmen. The story is told through the voices of six participants, including the victim himself.

The story that I know I will return to in the future is “Jack Who Loves to Paint.” A silent, incommunicative painter sets up his canvas in a field next to a truss factory and has an unnerving impact on factory workers, the owner, and the owner’s wife. The story is hypnotic and quietly unsettling, providing powerful and provocative subtexts, leaving the reader with a sense of potential and fulfillment. Two more stories follow “Jack Who Loves to Paint,” but I would have chosen to end the collection there, with the mystery and skillful restraint of a splendid piece of writing.

This Ditch-Walking Love is a masterful collection with a powerful and singular voice. Braziel trods familiar narrative fields, but with a poetic precision that makes them fertile and fresh.

Edward Journey, a retired educator and theatre artist, is on the editorial board of Southern Theatre magazine, regularly shares his essays in the online journal “Professional Southerner” (www.professionalsoutherner.com). and has published reviews, papers, and articles in Alabama Writers’ Forum, Arkansas Review, Southern Theatre, and Theatre Symposium.