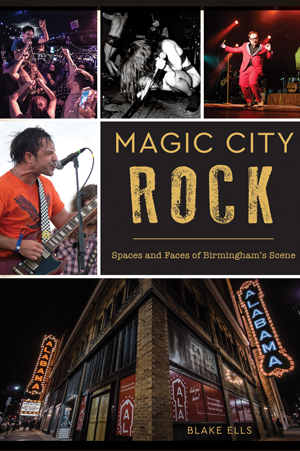 House-hunting for a move back to Birmingham in the spring, I passed the Southtown Court projects going toward the Expressway underpass on the way to look at a place in Highland Park. Just before the underpass, the Nick still stood in its converted convenience store location (“B’ham’s Finest Qwik Mart,” the sign used to say). My young realtor was waiting at the condo when I pulled up. “It’s good to know the Nick still rocks,” I said in greeting.

“Yeah, I’ve spent some time at the Nick,” he responded.

“So have I,” I said, and realized that my nights at the Nick predate my realtor’s birth.

The Nick, “Birmingham’s Dirty Little Secret” and a mainstay of Birmingham’s live music scene, is a presence throughout Magic City Rock: Spaces and Faces of Birmingham’s Scene by Blake Ells. Ells, a public relations professional, is an Alabama native and a true fanboy of rock music. His previous book, The Muscle Shoals Legacy of FAME (2015), documents FAME Studios and the Muscle Shoals Sound. His music journalism is widely published and showcases his knowledge of the music scene of his native state. Anyone who might have spent time at the Nick (or its forerunner, the Wooden Nickel) in the past half-century will find something of interest in this book. Ells writes at the beginning that his book is not an encyclopedia but, instead, “an overview with a narrative that draws a straight line from the origins of rock music in Birmingham to the current state of the scene.”

In fact, it’s not always such a “straight line.” Ells meanders back and forth with focuses on individual artists, individual bands, and a carousel of intriguing venues. The reader quickly picks up on the fact that if somebody is “the most punk rock …” they have received the author’s highest compliment. I lost count of the number of times we are told about the renaissance of Birmingham’s Avondale community. A half-hearted effort to tie the rise of an alternative rock scene in Birmingham to a rejection of Bill Riccio’s Aryan National Front, a Birmingham-based skinhead organization, seems to be an unnecessary stretch and is abandoned as abruptly as it appeared.

Even so, Ells documents a cultural history that is often under-recognized in the story of Birmingham. The musical history of the city in popular culture is most often focused on jazz greats with Birmingham roots like Cleve Eaton, Erskine Hawkins, and Sun Ra, or perhaps the occasional “American Idol” standout. Ells reminds the reader that Ensley’s Tuxedo Junction, the inspiration for Hawkins’s most iconic composition, later played host to numerous Birmingham bands and to national acts such as Beastie Boys, Propaghandi, and Fugazi at the Tuxedo Junction Ballroom under the management of Sam and Frank Ranelli. Along the way, one is inspired to do internet searches of bands and tracks that may have been missed (or forgotten).

Chapter 1 begins, as it should, with Marc Phillips and Tommy Calton and the national airplay of their band, Hotel, and its successor, Split the Dark. Those bands, along with Telluride, represent a more mainstream and pop rock thrust in the Birmingham music scene and, in Ells’s view, inspire the ascendance of the more alternative sounds of groups like Jim Bob and the Leisure Suits, the Primitons, HoHo Men, and Sugar LaLa. Interesting tidbits appear along the way, such as the fact that media in the Northeast dubbed the Primitons “Alabama’s best (ever?) band.”

Ells recognizes the gritty nature of a through-line in the Birmingham rock music scene that is still dominant today. That DIY ethic is celebrated, especially in the musicians’ appropriation of decaying or abandoned spaces for rehearsals and performances. In the view of Ells, that scrappy, somewhat inbred nature of the Birmingham scene cultivates a community of supportive artists. Throughout his narratives, musicians are filling in for, or are members of, other bands simultaneously, creating a camaraderie that is recognized as a virtue. Ells tends to list the names of every member of every band he documents; while the tendency is respectful to the individual musicians, it also makes the head spin if one is trying to keep up with the overview. Ells also gives proper credit to the local radio outlets that have supported the artists over the years, with particular attention to WRAX-FM and Birmingham Mountain Radio.

BottleTree, Brothers Music Hall, Cave 9, Firehouse, Zydeco, and other venues are given their moment in the spotlight. As someone who attended Patti Smith’s July 1979 appearance at Brothers, it is surprising that she is not included in Ells’s list of stellar national acts which appeared there in its short history, especially given the author’s affection for the “most punk rock” artists and institutions. Tuscaloosa’s importance to the bar and concert circuit is given minimal attention, although that is where I first saw most of the acts mentioned. In the one mention of Tuscaloosa’s legendary Chukker, the bar’s name is misspelled.

Such oversights are natural, however, and quibbling is to be expected since any history is filtered through the biases and tastes of both the historian and the reader. Ells clearly has his favorite focuses and those won’t always coincide with those of the individual reader. Still, there is much history to savor in the painstaking research and documentation that seek to determine what makes the Birmingham scene unique. Jacob Bunton of the band Mars Electric says, “I don’t think Birmingham ever had a ‘sound’,” and that pretty much sums up the challenge in trying to produce a coherent narrative out of a culture that produced rock sounds as diverse as Dead Fingers, The Grenadines, Hotel, St. Paul and the Broken Bones, and Sugar LaLa.

Magic City Rock is a treasure for anyone seeking to learn more about Birmingham’s music history in the late-Twentieth Century and beyond, especially the artists who collectively produced it. The book would benefit from a chronological listing of bands (and band members), venues, and significant milestones. At the very least, it needs a comprehensive index to help keep track of the abundance of information presented.

Personally, I was grateful to be reminded of “There Is a Bomb in Gilead,” the 2012 album and title track by Lee Bains III & The Glory Fires. It is one of the many details in Magic City Rock that I had almost forgotten.