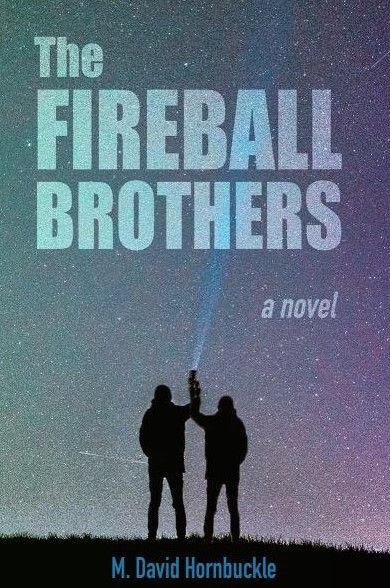 In the brief first chapter of M. David Hornbuckle’s novel, The Fireball Brothers, an aging couple in present-day Birmingham is exploring their blossoming romance in a bedroom in a Redmont Park mansion overlooking the city. The woman is a jazz and opera enthusiast while the man leans toward roots music. Such small talk leads to the man launching into a story of his family and a life-changing adventure in the late-1950s.

The Fireball Brothers is a Southern Gothic odyssey that presents a fantastical series of events played against a home-spun background. Billed as contemporary science fiction, The Fireball Brothers manages to fuse together musical genres, the Cold War, and Civil Rights with the supernatural and space aliens, the military and religious cults, … and a werewolf. “For much of the country,” Hornbuckle writes early in the novel, summer 1959 “had been a summer of reds and a summer of blues and a summer of blacks.” In the midst of that national restlessness, the complacent countryside of pastoral Pickens County, Alabama, where the main narrative of The Fireball Brothers begins, becomes ground zero for a sometimes-literal tangle of intrigue and colorful characters.

The story launches from a supernatural mystery. Robert and Wally Mackintosh, teenaged brothers, are swimming in a Pickens County pond near their house when a fireball plunges into the pond. In the fireball’s aftermath, the boys find that they have been fused together – with Wally clenched into Robert’s chest and back.

Thus begins a tale that carries the Mackintosh boys around the South, encountering a boldly drawn cast of characters as they and their family try to find a solution to their awkward entanglement. Henry Stanhope, a town doctor in Columbus, Mississippi, sends the pair to the medical center in Birmingham, where x-rays reveal complications that make the idea of surgical intervention too risky.

When Dr. Stanhope contacts Nicholas Montalto, a medical colleague in New Orleans, a possible back alley solution is found for the boys, but it comes at a steep price. The boys begin to use their charm and musical talents to entertain crowds and raise money for the travel to New Orleans and the surgery. That’s when the boys, billed as “The Fireball Brothers,” start to play juke joints and street corners around the South, teaming up on occasion with snake oil salesmen.

Hornbuckle’s rowdy and raucous comic narrative is broadly drawn and often outrageous, but its cast of eccentrics is leavened by the down-to-earth authenticity of the brothers and their stoic and long-suffering parents.  The book tries to capture very specific places and times, and a feel for the unique transitions brewing at the brink of the 1960s.

A supporting and omnipresent cast of characters, including Eddie Van Chukker, a Korean War veteran who is the local moonshiner, and his wife, Martha Jean, provides insights into the underlying themes of the novel. An earnestly by-the-book military man, Col. Whitehouse, and a curious Columbus, Mississippi, reporter named Munford Coldwater begin to show up wherever the Fireball Brothers happen to be.

At one point, while traveling through Birmingham, an enigmatic beatnik named Elizabeth (but called “Izzy”) takes the boys to a jazz club to see Sun Ra, the real-life Birmingham-born experimental jazz artist who adopted and maintained the persona of an extraterrestrial from Saturn. Such sidetracks fit well into a narrative that deals with extraterrestrial and Cold War paranoia.

The Fireball Brothers is a playful romp through a southern landscape before Interstates, when simple roadside attractions still carry cultural clout and a couple of rural innocents are fused into a changing landscape on the verge of the turmoil of the Sixties.

Edward Journey, an associate professor in Communications Media at Alabama A&M University, regularly shares his essays in the online journal “Professional Southerner” (www.professionalsoutherner.com) and has most recently published reviews, papers, and articles in Arkansas Review, Southern Theatre, and Theatre Symposium.