This is the Story of His Life 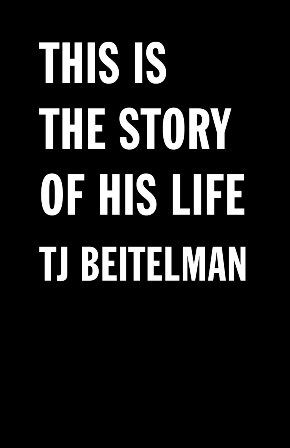 This is the Story of His Life
By T.J. Beitelman
Black Lawrence Press, 2018
Hardcover $15.95
Genre: Poetry
Reviewed by Robert Bullard

T.J. Beitelman’s book of poetry takes on the task of transformation. He looks at how lives can be changed at the linguistic as well as the personal level. Throughout this process, his poems confront shifts of perspective and character of the lyric I, often through the medium of physical objects. His best poems are playful and ironic. They view topics such as flight, language, or spiritual rebirth with an impressive freewheeling wit.

One of the strongest poems in the collection charts such a modification. The speaker of “The Toy Boat” looks at how one thing transforms to become something else through inventive thought experiments designed to question first impressions. For example:

Except it was not a toy boat but the story of a toy boat.

Except it was not the story of a toy boat but a poem.

Except it was not a poem but notes for a poem.

Except it was not notes for a poem but his math homework.

In this situation, the speaker faces the imaginative and the mundane. A toy boat is something a child can play with, but homework remains an obligation. One represents travel, the other routine. Beitelman uses this balance of exploration and ordinary living throughout This is the Story of His Life. We set out on a journey, but as is often the case, life grinds to a halt in unexpected ways.

In the second section of the book, this tendency becomes more pronounced. Each of the poems has “still life” as part of its title. A still life painting is meant to capture a meditative moment through separate objects arranged together. “Still Life with Suburbs, Part II” opens with the line, “This is the story of the life he drew up around himself: he traveled down a cul de sac and now he trudges back.” The main theme of this poem is returning to some place we have already been. This process can be a struggle as the speaker talks about how he dealt with verbal abuse.

In his language, Beitelman builds a taut tone that spreads evenly over individual prose poems. “He lived deliberately and upon deliberation found he had not lived at all” goes “Still Life with Sirens,” highlighting skillful repetition. Another example of his style can be found in the line, “The pen falls in and breaks the skin,” where monosyllables move easily, satisfying ear, mouth, and mind. Additionally, the poem “Event Horizon: MRI” plays with puns: “Hole and lobe and lope and mole” in what could otherwise be a dark moment.        Finally, first thoughts and feelings can even be written over. “Muse” performs this action of revision in “A sentence is a stream // A froth of swift-moving sentiment – sediment. What unseen creatures thrive there or do not.” This last line also shows Beitelman’s frequent use of alliteration and assonance to push forward ideas.

This confident and wry tone works well for many of the poems. At times, however, the author’s allusion threaten to subsume the book which contain them. Hamlet, Genesis, Saint Augustine, Fred Rogers, and Philippe Petit would overwhelm another collection trying to incorporate them without this ironic detachment. Beitelman’s keen observations on and through his predecessors keep This is the Story of His Life going. For example, in “Calculus,” the poet alludes to W. B. Yeats’ “The Second Coming,” Yeats, of course, writing from an extensive tradition dating back to the New Testament. “Calculus” may be more enjoyable when considered away from Yeats. But the images that Beitelman calls up – math homework, wondering about the infinite while day-dreaming, poor beer – have a plain irony that accurately captures the eternal in the mundane. As he fittingly states, “the smudged sky threatens to open itself.”

Looking at the collection as a whole, it is comprised of 35 poems across three sections entitled: “Beginnings,” “Middles,” and “Endings.” The overall structure points to the fact that as we write our own lives, it comes at us from many directions. We are still living it and must make decisions on what to include and interpret.

One poem represents this way of living. A section of “Multiple Choice” reads, “True or false: there will be flying cars in our lifetime. // Define our lifetime. // The likelihood of life on other planets. // If you had to choose between which of your future children would lose an eye or an arm or both which would you choose and why.”

Here as well as elsewhere, Beitelman captures that uncertainty which, in one poem, he calls metastasis: the growth of a life from the personal and linguistic perspective. Things could go wrong, or they could blossom into something new. That is the process of growth Beitelman charts.

Robert Bullard is a writer situated in Montgomery, AL where he practices poetry. His work has previously appeared in Filibuster.