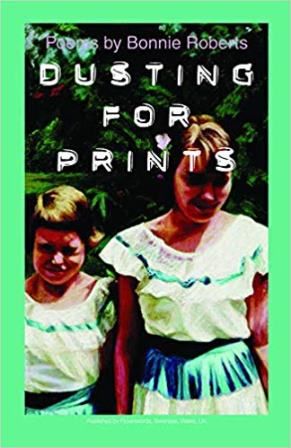 Bonnie Roberts is a philosopher-king, perched on a precipice between Asia and Europe.  The moment the cover of Dusting for Prints is opened, she has already, long ago, leapt into the Hellespont…Leander-like.

We – you and I, are the Heroes, holding the Light, as we read.

If I am the guide, then I recommend Dusting for Prints, Poems by Bonnie Roberts, with mind and heart…which, upon reading, may have become a little more whole.

The poet warps time, viewing the past in parallel with the now, and the stumbling and scarring it took to arrive here.  The personal past aligns with character.  Do heightened language, poetic form and imagery protect the seeker or is it the knife’s point?

At the very start, the introduction is a poem, a frame – prologue and epilogue; then the expected copyright and table of contents, and then bang, we’re on our way, “Along the Midway,” the first poem.  Ms. Roberts captures the noisy carnival or fair, and within a line, the silence of the galaxies.  The reader could be on a Ferris Wheel or a Redstone Rocket – crashing, thunderous and alone, and all of it thrilling.

In “The Bottom of the Sea is Silent” the father of the past is seen through the eyes of the adult daughter; and she discovers his limitations, magic, and love were, long ago, expressing as violent anger.  In early life we readily learn the anger; however, it takes long-life to see without the judgement.

Sister relationship is in portrait in several different poems, none are sentimental.  Two such poems are “My Sensual Sister” and “Birthright.”  However, it is in “Dusting for Prints,” the title poem, that an indelible image of loss sustains.  The section below illustrates the deft creation within two lines…one line, of antithetical levels – past and present, bearing under and understanding:

We find other loves,

but the Loves of our Birth

live in our feet,

and everywhere we walk or fall

is to find who we were before;

A Shakespeare person, I am interested in the poetic line and where the poet choses to break it.  In “Crossing the Dardanelles,”  “The Medicinal and Surreal Nature of God the Day My Father Died” and “Suffer the Little Children,” each poetic line delivers its own evocative image and message, while building the whole.  Furthermore, even the smallest end-line pause reveals a runaway rhythm, compounding the poems’ intense effect.

“Suffer the Little Children” holds a favorite memory of baptism by emersion:

We are baptized and kick the preacher,

who keeps us under too long,

we splash the two front rows.

There is nothing we can do about

this life in us

This excerpt renders two complete thoughts or one thought housed in the first couplet, followed by a line of action, followed by a line and a half of philosophy.  When read line by independent line a child’s inseparable thinking/action is revealed, as is an immediacy and comedy into which we are delivered.   When read line by line there is a spot of time for personal response, interpretation, such as possible identification with the horror-stricken faces of family and parishioners.  Then on a dime, she turns or returns in the last independent line segment to the adult intellect tethering past hope, recognition of loss, enlightenment.

Ms. Roberts has a distinct feel for port and sea and brings it to the book in story and image. I especially liked ocean imagery, and that of shore, safety, sea bottom, and silence…and endless open sky.  She takes this into many poems, compelling in “Crossing the Dardanelles,” “Phantom Waves,” and “Ishmael, who will father me now?”

In this poem Ishmael (name symbolizing orphans, exiles, and social outcasts) takes on Pip of Great Expectations, as a fellow passenger.  Both watch and narrate, desperately holding on to the coffin/life preserver left by the marked action of Queequeg.

The poem repeats, “Queequeg is my father…the one whole twisted piece of art that is my father.”  and “He knows I will need hieroglyphics I can feel with my hands –“

The poem reminds or rather consoles, there will be a balance to the universal struggle: the father – blood or no, carves the signs for the child to return to embrace – whether in this life or the next.

And lastly, as the reader will come to the challenge – a Pileated Woodpecker is a black and white, red-capped North American bird, fairly large.  It does not look like a robin, but I could imagine the resemblance.

Susan Hazen Guthrie is a stage director and dance/fight choreographer. She is a Humanities Scholar and Master Teacher in Voice and Speech and Verse Literature. She is a Teaching Artist for the National Endowment for the Arts, the Poetry Foundation, New York State Alliance for Art Education, Tennessee Arts Commission, and Alabama State Council for the Arts. Ms. Guthrie is a poet and the author of Shakespeare in the Classroom and The City Shakespeare Projects. She lectures and coaches throughout the country for POETRY OUT LOUD