Nobody Knows How It Got This Good 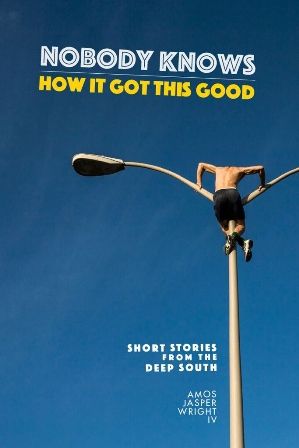 Nobody Knows How It Got This Good
By Amos Jasper Wright IV
Livingston Press, 2018
Paperback $8.95 or Hardcover $13.95
Genre: Short Fiction
Reviewed by Andrew Mollenkof

In his debut collection of short stories, Nobody Knows How It Got This Good, Amos Jasper Wright explores the complications of existence in his home state, Alabama. No matter where you travel, every place has a cadence, a rhythm and melody interwoven with the sights, sounds, and people. Alabama, The Heart of Dixie, is a place of incredible soulfulness entangled with bondages, past and present, and Wright’s collection captures that. A Birmingham native, Wright shows readers the South as he sees it, from Walmart parking lots to Jaguar dealerships, suburbs to trailers, the book gives us a taste of what the South looks like today. In the telling of everyday moments captured with a careful eye, Wright reveals the funny, the absurd, the horrific, the human.

This is not a collection that is concerned with the absolution or salvation of a city with a disturbing legacy, but rather investigates what it is to be a city with a disturbing legacy. Wright tackles corruption, financial desperation, environmental disaster, the long shadow of Jim Crow and a host of other issues throughout the sixteen stories in the collection. The narration of all the stories but one are in the first person giving readers a wealth of perspectives. A black man with an Albino son struggles to raise him in an unwelcoming suburb. A chef making meals for the death row condemned grapples with spiritual epiphanies and loss. A city boy runs away from his past, taking up residence on an old rundown plantation that his sister attempts to rescue him from. All of the characters are untamed in some way, each of them an oddity born of the South.

One of the strongest stories in the collection, embodying the collection’s overall themes, “Birmingham Goddamn” centers around a man obsessed with the Civil Rights era. Having taken part in the violence against black folks, the former fireman becomes driven by a monomania to understand the philosophical and historical implications of the Civil Rights movement. The protagonist hopes to make a discovery about humanity. He longs to know that mankind is better than his worst mistakes, that others would have been stronger, would have chosen something different.

Wright relates the sixteen stories in Nobody Knows How It Got This Good with language that is soaring and grandiose. There is hardly anything about his writing that is quiet. In one particularly charged moment, he writes: “He uncapped the bottle of peroxide, dousing it on his holocaust chest, the words GOD HATES FAGS whitely working up a froth as his screams rose like lead balloons in the treetops and a mephitic smoke of birds poured from the branches.”

Wright rarely uses a five letter word if he could use one with eight. This expansiveness of language breaths into his descriptions, giving the prose a deep sense of place. Throughout the book the language prompts readers to feel that they actually are somewhere, not just reading about being somewhere.

Wright set out to do something challenging and ambitious by taking on so many varied Southern issues and viewpoints. His writing is at times overwrought, failing to recognize the difference between when a word is necessary and when it is simply self-important. This isn’t because Wright is bombastic, rather he clearly wants his stories to be as full and deep as the people and places he’s writing about. Yet the frequent use of overly complicated words like “sanguinolency”, “anthropophagus”, and “borborygmus”, and phrases like “the echolalia of the fustilarian” at times take away from moments of real candor and warmth of the book. The diction of Nobody Knows How It Got This Good is full of risks, it’s just too bad not all of them paid off. It’s the work of an author still coming into his own, and its proof of a writer going someplace.

Andrew Mollenkof is a first-year fiction MFA candidate at The University of Alabama.