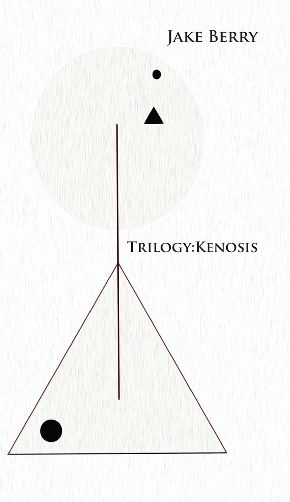 Let me propose here that Jake Berry’s new collection of poems, Trilogy: Kenosis, is both an eloquent argument for what remains possible on the page and a splendid exemplar of that very possibility. As ever, Berry’s essential project braids together philosophical sophistication, linguistic invention, and an old-fashioned delight in the work of poetry itself.

The first of three sections, “Scale,” is a kind of formal mediation on the spiritual poetics of postmodernity. At once theological, archaeological, and musicological, these seven gestures open an inquiry into the secret nature of our poetics. Like the poems of its brilliant dedicatee, Gregory Vincent St. Thomasino, “Scale” searches for, excavates, and claims (in the name of goodness and deep truth) certain unmapped spaces of hermetic lyricism. Berry’s capacity for poetic utterance is admirable indeed not least for the way in which it transmutes the received tropes of self-disclosure and torques the language of epiphany:

to visit
along the way

[discovered]
a femur
a pelvis

a shoulder blade
upon which
inscribed in Greek
(as was the Orphic inclination) :

a spike in the earth

There is, of course, an urgent human narrative here and indeed in the entire collection. Death and its attendant transfigurations haunt this book. We feel it as much in the line breaks and internal stresses as in the declarative aspects of the poems, which are nonetheless arresting:

The word
has shaken
us free

with an essential,
forbidden
summoning

more than knowledge
more than life

a music
one step beyond

“A Second Octave” stages a further modulation of Berry’s philosophical-spiritual exploration. And if the turn here is more inward, it is perhaps also more emotionally explicit. It is among this fine book’s many high achievements that the confessional is never conventional but, rather, always framed inside the dual expressive motifs of a searching mind and a singing heart. I find here, a discernible invocation of Charles Olson’s lines “As the dead prey upon us / they are the dead in ourselves.” And as these are inscribed for yet another extraordinary dedicatee (and an important Olson scholar), I might point as well to the complexity and range of reference in Berry’s poems. Folks, here is a book informed by an architecture of formal design and the architectonics of metaphysical unity:

Out of death –
such abundant nothingness –
a fire is lit
in the imagination
(who understands this mysterious capacity?)
Even the seeds we do not want
spring to life

“Kenosis,” the titular and final section, is, in some sense not only the center out of which the whole book spins but also the singularity to which it finally returns. Dedicated to yet a third essential artist, David Thomas Roberts, the language here fuses the energies of the previous sections in a dramatic synthesis of stentorian pronouncement and oracular vision:

We have every reason to celebrate the courage implicit in the title’s meaning for contemporary poetics and the vanguard of postmodern spirituality. Moreover, we might also envy Berry’s willingness to investigate those originary forces and the ways they animate his work. I do not know what we must surrender or how, but my own intellect and faith tell me that Berry is showing us something we need to see. Withal, Kenosis is an elegant, daring, and beautifully honest work. Berry says that “memory is the past made sacred.” I believe this book does the same for the presence of language itself.