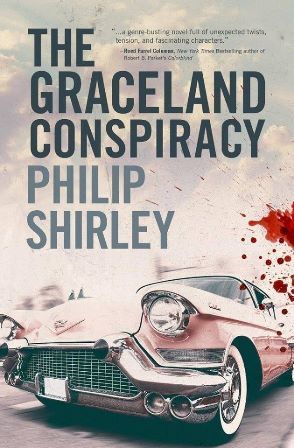 Thirty years after Mojo Nixon’s “Elvis is Everywhere” commemorated the tenth anniversary of the King of Rock ‘n’ Roll’s sad demise, the Big E is as ubiquitous as ever. In 2018 two stellar documentaries challenged stereotypes about his career and cultural relevance, Thom Zimny’s The Searcher and Eugene Jarecki’s The King. NBC recently aired an all-star tribute for the fiftieth anniversary of the still-electric’68 Comeback Special, and the latest RCA compilation, Where No One Stands Alone, proves the artist was as important to gospel as to the devil’s music.

In Alabama we’ve enjoyed not one but now two Elvis-centric novels. Following Mike Burrell’s Land of Grace, comes Philip Shirley’s The Graceland Conspiracy, an ingenious mystery that pirouettes between “Elvis is Alive” myths to the nefarious machinations of a government agency called the National Security Enforcement Office. NESO is as ominously Nixonian as an acronym can sound, conjuring up images of the espionage paranoia of James Grady and Richard Condon popular when the last two hits the Pelvis enjoyed in his lifetime, “Moody Blue” and “Way Down,” were gyrating (somewhat arthritically) up the charts. You could almost call this taut ricochet through Watergate-era conspiracy history Six Days of the 50,000,000 Elvis Fans Can’t Be Wrong.

As Presleyites might suspect, Shirley’s starting point is that bizarre Oval Office meeting between Elvis and Nixon in December 1970 (itself the subject of a recent movie). News of that intersection of politics and pop culture didn’t filter out for a couple of years (as the novel notes), and it was even longer—the mid-1980s—before the iconic photo of the odd couple was ever viewed, much less reprinted endlessly on T-shirts and postcards. For Shirley, Elvis’s ambition to be a DEA narc inveigles him with that other pivotal 1970s’ fascination, the mafia, ultimately putting him in the sights, literally, of NESO. “Who Killed Elvis?” was one of the great parlor games of the Carter/Reagan age, and the favorite answer was, “Nobody … because he ain’t really dead.” Shirley has clearly done his research into the far reaches of the Spotted-at-the-Kalamazoo-Burger-King urban legends that diminished the King’s reputation for decades: one of the joys of the novel is its reference to Gail Brewer Giorgio, the godmother of the Elvis-Still-Walks-Among-Us movement. Her bizarre 1978 sci-fi novel Orion first proposed that the King faked his death and led to a kooky bibliography of kitsch titles like The Elvis Files.

Not that The Graceland Conspiracy is a Woodward-and-Bernstein throwback. It’s set circa 1997, with a disgruntled Gen X’er, Matt Boykin, untangling the involvement of both his and his erstwhile girlfriend Kristine’s Howard-and-Dorothy-Hunt-esque parents in Elvis’s death. The timeframe makes for a double dose of nostalgia, taking us back to the early days of Googling, when people still used Yahoo and DVDs. And while Shirley masterfully weaves readers through Birmingham landmarks, large chunks of the book stretch convincingly to Mexico and Italy.

To pinch a line from Paul Simon, fans of thrillers and Elvis alike can have reason to believe their expectations will be well-received in The Graceland Conspiracy.