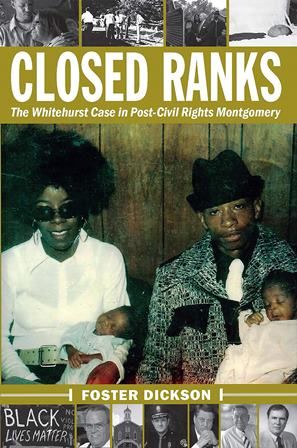 Closed Ranks is a powerful and methodical memoir that captures a wrongful historical account of the untold murder of Bernard Whitehurst Jr., an African American man who was senselessly killed on December 2, 1975 by a white officer on the Montgomery police force.

Foster Dickson brilliantly presents the institutional corruption that had become entrenched in the South during a time that is now seared in our nation’s memory. His personal narrative reveals the countless acts of deception orchestrated by the Montgomery Police Department to mask police brutality towards an innocent and unarmed man mistaken for a robbery suspect.

During the period immediately following the peak of the Civil Rights Movement, several political antics occurred amongst the City of Montgomery councilmen, and within the purview of local law enforcement. Substantial evidence pertaining to the convoluted case was prohibited and never voluntarily disseminated to the Whitehurst family, which in retrospect, created a difficult time for the family to put in perspective.

Within this captivating narrative, Dickson illustrates the ways in which this controversial case came to be a conundrum of sorts, as he delves deeper into his research through interviews, police reports, and judicial documents. Through a laborious pursuit of the truth, Dickson meticulously uncovers the sobering, untold story on behalf of the Whitehurst family.

This astounding work recalls a time in history when racially charged comments and actions were far more prominent than today, and appallingly, taken as a matter of course in daily life. The Whitehurst family was at a disadvantage, to say the least, to seek justice against the perpetrator who left their guiltless loved one lifeless.

In addition, the family faced a further legal difficulty, that many citizens at the time considered unconstitutional. During the 1970’s, a law was permitted, the “fleeing felon rule,” allowing police officers to open fire on a “fleeing felon.” Protected by the judicial system, Donald Foster was never demoted, fired, or charged with a crime.

Bernard Whitehurst Jr., a husband and father of four, never received lawful justice, nor did his family receive compensation from the scandalous bloodshed that took place over four decades ago. The family finally received a formal and long-overdue apology in the summer of 2012. Despite the darkness and despair endured from such an inconceivable event, this gripping saga closes with the celebratory tribute that took place in 2016 to honor the life and legacy of Bernard Whitehurst Jr.

Throughout his text, Dickson vividly recaptures the shocking event, paying homage to the Whitehurst family. His unique and image-rich style will impel readers of all races and creeds to take an intimate look into a period of notorious inequality. Dickson delivers his content precisely, leaving the reader with a clear and well-organized interpretation of the events as they took place. The structure of the text itself allows the reader to easily follow the storyline of the case.

Potentially, the vast collection of political names and dates during the political period may confuse and overwhelm readers, possibly diverting from the narrative itself. However, Dickson is keen to present hard facts, and all “secondary” or supplemental materials is never less than helpful in clarifying this often-complex case.

Closed Ranks is an engaging and fascinating read thanks to Dickson’s meticulous research which incorporates a vast backlog of legal documents and reports. His resourcefulness and the care with which he handles his material goes to considerable, and admirable, lengths in affording Bernard Whitehurst Jr. the justice he did not receive during his life.