The Witches of Moonlight Ridge 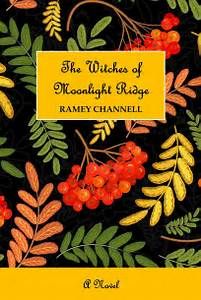 Ramey Channell has written the most delightful story I’ve read in many years. The story is set in a mountain community in central Alabama and features Lily Claire, the most precocious young girl you would ever want to meet. She is the narrator of this tale and also the protagonist. Her cousin, Willie T, who is the same age as Lily Claire, is her playmate and co-conspirator. I would judge them to be about 10 or 11 years of age. Their curiosity for the unknown leads them to explore parts of Moonlight Ridge that their parents would have forbidden, and, in fact, they did forbid, but curiosity had taken over and urged them on.

The dialect of these two kids from perhaps the 1960s rings true to me, as I too originated in the Alabama hill country. While the dialect of the Alabama hill country folk is Southern, because it originates in the South, it is not the syrupy ”Gone with the Wind” Southern accent normally associated with the South. The accent is more Appalachian in character. And it is a pleasure to hear these kids talk as they go from one adventure to another, oftentimes accompanied by their schoolteacher, the curious and inquisitive Erskine Batson.

At first, their adventures on Moonlight Ridge were innocent enough. There was some indication that there might be witches somewhere on the mountain, though that seemed far-fetched. But then the reader learns about Moor’s Gap Road on the mountain where at one time long ago, a man owned an inn at the stagecoach stopping place. That inn had been closed for many years and was thought by many locals who lived on the mountain to be a haunted house, because of the murder by a posse of lawmen of a highwayman who had come to visit the innkeeper’s daughter, in a chilling story reminiscent of Alfred Noyes poem, “The Highwayman.” The famous poem written over a hundred years ago was well known to local people who recognized the connection. An interesting aspect of the tale was the ethnic background of the innkeeper, and his daughter. They were thought to be Moors, a dark people from the north of Africa, who conquered the most of Spain some seven hundred years ago.

The children cannot stay away from the ruins of the old inn which they believed was haunted by the innkeeper’s daughter who was in love with the highwayman. The story comes to an end, and some aspects of the mysteries were solved, but the big question remains: Was there a witch, and, if so, was she truly a witch or was she an angel. Some mysteries are never solved, and in a novel, the mystery must remain.
This is a delightful tale of adventuresome children, but there are more serious aspects as well, including racial prejudice and the efforts of some in the face of prejudice to live by the Golden Rule.
Ramey Channell has done a fine job of drawing and defining her characters, particularly the children. I recommend this book for adolescents and for adults alike.

Chervis Isom is a lawyer in Birmingham, Alabama, and is the author of The Newspaper Boy: Coming of Age in Birmingham, AL, During the Civil Rights Era, a memoir in which he tells stories of his emergence from the narrow world view of the Jim Crow South through the leadership of a kind couple on his newspaper route.