Saban: The Making of a Coach 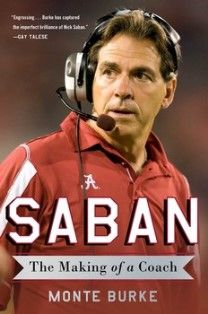 There is a good case to be made for not writing biographies until the subject is dead. Feelings are inevitably hurt. The subject’s family and friends may learn things they don’t need to know.

J. D. Salinger fought his would-be biographers in court. Hemingway hated it when in 1962 Philip Young suggested in a book of criticism that Hemingway’s war wound in Italy in 1917 had traumatized him and given him a neurosis concerning death. Hemingway was not going to be psychoanalyzed in print while still alive.

Harper Lee has made her feelings clear, but Charles Shields went ahead with Mockingbird anyway, without her help.

Coach Nick Saban may not like being the subject of this book, but the question most asked about Saban is “What is he really like and how did he get that way?’’ and Monte Burke’s book makes the best attempt yet to answer the question and in a pretty responsible way. Saban did not authorize this book and sit for hours of interviews, but neither, it seems, did he actively try to squelch it.

Monte Burke has done the work, interviewing more than 250 people—friends, colleagues, and players coached by Saban. Burke adds in his “Acknowledgements” that he has met Coach Saban twice, written a piece on him for Forbes magazine and “talked with him on the phone numerous times.” He has read the many, many magazine and newspaper articles ABOUT Coach Saban as well as the books BY him: How Good Do You Want to Be? A Champion’s Tips on How to Lead and Succeed at Work and in Life (2005) and Tiger Turnaround: LSU’s Return to Glory (2002).

Even though most agree Coach Saban is a private and even introverted man, there have been, by necessity, hundreds of press conferences over the last forty years in which Saban spoke for himself.

The roots are clear. Coach and Mrs. Saban hail from Monongah, West Virginia, a small, poor Appalachian town where most men worked in the coal mines.

Just as Coach Paul “Bear” Bryant said football was the way out of Moro Bottom and then Fordyce, Arkansas, Burke quotes Saban as turning to his wife, Terry, on a visit home and saying, “How in the hell did we ever get out of here?” Determination and hard work are, as is often the case, the answer.

Place was formative, but an even more powerful force, though Burke never mentions Sigmund Freud, is clear. Saban’s father, “Big Nick,” as his Pop Warner coach and as boss in the family gas station, was a tireless perfectionist, some would say a tyrant, impossible to please. Do things perfectly or you’ll do them again. Burke tells an anecdote concerning washing cars at the station: “If he left so much as a tiny spot on a car, his father would make him rewash it entirely. (Saban hated dark-colored cars for this reason.)” Perhaps of necessity, “Saban, at a very young age, learned to embrace and love the process of doing.”

All sons want their father’s love and praise, but “Big Nick” died at 46 years old, never having seen his son as a head coach, and Burke suggests the chance for winning his approval “disappeared forever.”

Several interviewees declare that Coach Saban is never relaxed, never happy, never satisfied: “There will always be a spot left on the car.” True, he spends every waking minute coaching or watching film. But as Terry and many others said, a person doing what he loves IS a happy person.

Burke shows Coach Saban to be, from his childhood up, a serious person—ambitious and according to friend Bill Belichick “ultracompetitive” whether coaching or playing golf. This competitiveness extends to professional advancement. He held nine jobs in eighteen years, never staying long at one place. And salary, which is another way to compete, matters a lot, although Burke is careful to point out his foundation, “Nick’s Kids,” has “doled out more than $4 million since its founding.”

Multiple career moves for coaches are common, but Saban’s later moves are different, Burke suggests. The exciting challenge is in turning a failing program around, whether at Michigan State, LSU, Toledo, or Alabama. Maintaining excellence is less satisfying, and Burke says Saban becomes restless and unhappy when he feels expectations are absurd or he is underappreciated. (Three-peat was a lot to ask.)

Among his jobs, as we know, were stints in the National Football League, most notably as head coach of the Miami Dolphins. That experience, and other stints in the NFL, was not as satisfying to Saban. Although no one would deny the NFL is a capitalistic juggernaut, in several respects Saban found it “more of a socialist enterprise than a meritocracy.” There is some revenue sharing, true, and a salary cap, but the real problem was the team that comes in last gets the first round pick next year. Burke quotes Coach Saban as saying, “In the NFL you were penalized for success.” What Saban wanted to do and does at Alabama, as he did at LSU, Michigan State and elsewhere, was out-recruit any other coach in the country for the best players.

Besides the need to out-work everyone else, when coaching in the NFL there was the question of control. Burke quotes Ed Sutter, a player at Cleveland where Saban was an assistant: “He tried to intimidate and threaten players, even vets.… That works in college, but not in the pros.” Pro football player, now coach Harlan Barnett is quoted: “Vets don’t like to be yelled at. They say ‘I’m a grown man.’” Coach Chuck Bresnahan says: “There were certainly times I wanted to punch Nick in the nose, but at the same time I knew I was getting better as a coach.” In spite of these stresses, which were even more intense at Miami, no one ever doubted Saban’s commitment or his expertise. He knew the game better than anyone.

College players are more malleable, eager, not yet prima donna millionaires and they want to get better, be champions and, if possible, get to the pros. It seems certain this is a better fit for the intense, hard-driving Coach Saban.

College players are also more likely to buy into Saban’s famous “Process,” inspired in large part by the Michigan State professor of psychiatry Lionel “Lonny” Rosen. Dr. Rosen advocates breaking down large projects into “smaller pieces that can be handled without anxiety.” The goal here is the perfectly played football game. Impossible, yes, but “The Process” makes it imaginable. Burke reminds the reader that this system of “cognitive behavioral thinking” stems from an even older method and has for a long time been employed by Alcoholics Anonymous: “One day at a time.”

Each player is told: no distractions, ignore next week’s game, the score in this game, focus on your immediate job (the average play lasts seven seconds) and do that job perfectly. The rest will take care of itself.

Burke seems correct on history, reporting on what he has learned and others have said. But, ONE page from the end, he strays into prophecy. This is one of the great dangers in summarizing lives that are still under way.

Writing immediately after the loss to Ohio State in January 2015, Burke declares: “The close of the 2014 season confirmed what many had believed the year before after the shocking loss to Auburn: An era had ended for Saban and the Crimson Tide. The dynasty—as loosely defined as these things are—was over.”