Capone, the Cobbs, and Me 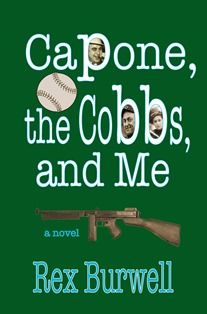 With a title like Capone, the Cobbs, and Me, (and featuring photos of Al Capone, Ty Cobb, and Cobb’s drop-dead gorgeous wife Charlene on the cover), the reader is intrigued right off the bat. The story told within doesn’t disappoint, either. The “Me” hanging out with Capone, his thugs, and the Cobbs is a Chicago White Sox catcher named Mort Hart who quickly falls in love with Cobb’s wife. Hart is second in hitting percentage in the Roaring ’20s when a knee injury places him on the disabled list. Hart also happens to be the only major leaguer with a law degree. The ballplayer’s life suddenly catapults into spellbinding adventure when Baseball Commissioner Kennesaw Mountain Landis needs someone special to investigate Capone’s fixing outcomes of ballgames using Cobb.

Author Rex Burwell spins a fictionalized tale based on a real-life major league catcher named Moe Berg, once described by baseball Hall of Famer Casey Stengel as “the strangest man ever to play baseball.” Berg was an average major leaguer who was a spy for the OSS (Office of Strategic Services) during World War II and later for the CIA. Over the next 200 pages, the author takes readers on a surreal journey through baseball, gambling, organized crime, murder, and mayhem—with enough subtle descriptions of sex and violence to spice things up. Burwell also tosses in a few musical elements to make for a fascinatingly quick read.

Among the characters is Milton Mezzrow, a jazz clarinet player. Better known as “Mezz,” the musician is a bookkeeper at the Arrowhead Inn in Burnham, Illinois, a hotel owned by Capone where Mezz not only keeps two ledger accounts but also leads a house band called the Mezzophonics that features guest trumpeters Louis Armstrong and Bix Beiderbek. In one memorable passage, Burwell shares Mezz’s description of the Mezzophonics as a “zebra band,” the first mixed-race band in history. “Black and white cats, Matts. And some hot guests with good chops too. You never seen a mixed-race band before, did you? And nobody else did either. This is history.”

Mezz is actually a white Jew who had decided years earlier to pass himself off as an African American, with the author referencing Mezz’s “perfect Negro hipster accent.” Burwell lets Mezz do the talking: “We got a real tight band,” says Mezz. “historic, like I told you, the dark and the light and the lightly toasted playing together so hot, Jack. You’ll hear it tonight. You can’t hear it anywhere else in the universe, nowhere but here, tonight.” Our hero Mort Hart elaborates on Mezz: “His metamorphosis from Jew to Negro with no change in complexion was a bold strike, not undertaken foolishly, but knowingly. Only white people thought Mezz a fool. Negroes took him as a brother who talked their language. I thought him crazy at first. Then I thought him courageous. One changes one’s mind.”

Dig it. Especially the Mob violence. Hart wanders into an icehouse loaded with meat while exercising his baseball-playing damaged knee, only to discover the dead husband of a woman who was sleeping with a Capone thug named Jimmy. “I walked in a few steps on the soft, wet sawdust, and lit and held up the cigarette lighter I always carried,” says Hart.” Behind hams and a side of beef hung a dead man wearing a hat, suspended by a noose and a hook. I got a good look at the waxy face. I never forgot the face.”

Burwell uses several references to indicate that Hart is telling his story in today’s world. Hence, the introduction of a pitcher named Dutch used by Detroit Tigers manager Ty Cobb to throw a ballgame for Capone. Hart notes, “My complete baseball record is available on the internet. I batted against Dutch eight times in the 1926 season and got only one hit—that after he’d hurt his arm and had nothing.” The fix was in because Dutch was forced to pitch though “Dutch’s arm was so sore that he couldn’t comb his hair, but Cobb started him anyway.... In the first inning, with two runners already on base, I batted against him for the eighth and last time that 1926 season. The first pitch Dutch threw was a nothing spitball—he had nothing. He was through as soon as he started. Even as I swung and knocked the ball on an arc to the wall, I felt a drop of his saliva fly up and hit my eye.”

In a strange twist, Hart becomes a spy for Kennesaw Mountain Landis as he also serves as legal advisor for Cobb and lusts after Cobb’s wife. Burwell writes in sexually flirtatious descriptions of our hero’s first introduction to Mrs. Ty Cobb during a blizzard: “At the hotel I met Charlene for the first time. She was outside in a bulky coat that could not hide her good figure. Without vanity, she was aware of her beauty.... She took off a glove and shook my hand. Women, ladies, did not offer a hand in those days, much less take off a glove.... She unbuttoned her fur. One does not often see such a beautiful figure. A man must take advantage of rare occasions. I could feel Cobb watching me look at her.”

Hart continues: “Charlene and I had been corresponding for months, exchanging typed, unsigned letters. I fell in love by mail.... Tucked in one of those letters had been a picture of her that I still have today. She wears a cloche with wings, like Liberty on the dime. In profile her upper lip pushes out.... Cobb made his first wife his ‘trophy wife,’ as they call it nowadays, and kept her thereafter above his mantelpiece with the boars’ heads.”

The musical passages are among the most memorable, historically speaking, especially when Capone is present. Referencing Louis Armstrong and Bix Beiderbecke, Burwell writes: “Both musicians were Mezz’s friends. Beiderbecke happened to be living and drinking himself to death in a farmhouse somewhere in the area. This was not the first time he’d played with the Mezzophonics. He was the acknowledged best white jazz cornet player in the nation. Armstrong, of course, was simply the best, white or Negro.... After the show, the band members all ate where the Negroes ate, in the kitchen. Beiderbecke had five shots of free whiskey in three minutes, fell off his chair and had to be helped outside to puke. From here he was poured into the back seat of a car.... Mr. Capone joined us, stepping through the swinging doors, a Heavy on either side of him.... Vain Capone was adept at keeping people, especially photographers, from seeing his left profile with its two long, vivid scars. His wide-brimmed fedora was canted left. He carried his head toward his left shoulder. He wore high collars and often carried a handkerchief to hold his left cheek.... ‘Good music,’ he said to the musicians. ‘Good music, everybody.’”

Ed Reynolds is a writer in Birmingham.