The Woman in the Photograph 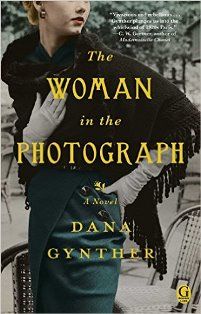 Dana Gynther made her debut as a novelist in 2012 with Crossing on the Paris, a novel set aboard a transatlantic liner on her maiden voyage from Le Havre to New York. As the ship sails west, three women, one from first class, one from second and one from steerage, strangers until then, meet and exchange their life stories with rich flashbacks to their very different experiences in Paris

Gynther, raised in Auburn with an MA in French literature from UA, has written a book on French luxury liners, has lived in Spain for twenty years, and is thoroughly steeped in matters European, especially Parisian. The three women in Crossing were, to the best of my knowledge, fictional creations.

Not exactly so with Lee Miller, the protagonist of The Woman in the Photograph.

Like many another in the recent craze we can, I think, trace to Woody Allen’s Midnight in Paris, Gynther is fascinated by Paris between the wars. This novel is a biofiction, perhaps to coin a term. The real Lee Miller was a woman of breathtaking beauty. Born in 1907 and raised in Poughkeepsie, New York, she was a supermodel for Vogue magazine, photographed by the best in the business, such as Edward Steichen.

(In fact, in New York in 1928 there had been a scandal when one of Steichen’s elegant fashion shots of Lee had been used in an advertisement for a distasteful new product, a sanitary pad called Kotex.)

Miller’s father, a gifted amateur, had already planted an interest in taking pictures, and Steichen helped with her education.

This novel opens in the fall of 1929 with Lee Miller, twenty-two years old, entering Paris, determined to be mentored by the photographer Man Ray, the most celebrated experimenter of his time. Man (Emmanuel) Ray, one of the surrealists along with Breton, Picasso, Picabia, and others, was already a fixture in Montparnasse, known for his pictures of Kiki, his model and mistress for six years.

Man Ray never stood a chance. The gorgeous Miller is more than sexually liberated; she is charming, tireless, ambitious, endlessly curious, adventurous, unfaithful without much conscience. She has affairs with a Russian aristocrat, an Egyptian prince; some are one night stands, some extended.

There are fantastic costume parties and “from time to time Lee would disappear with a man for an hour or so….”

We learn in time that Lee was the victim of rape by her Uncle Bob at seven years old and also had been photographed nude by her father for years—THAT with no apparent ill effects, but it still seems a little creepy.

Talented and beautiful, Miller models for Paris Vogue, herself takes photos of celebrities such as Charlie Chaplin, stars in a film by Jean Cocteau and develops—indeed invents—cutting edge darkroom techniques, some of which, like solarization, are claimed by both Man Ray and Miller.

The relationship is fraught, as Ray wanted an assistant and mistress, not a ferocious competitor who makes a claim to equal partnership. In the novel, the classical, mythological narrative which Man Ray would like to be following is the story of Pygmalion, the sculptor from Cyprus who carved a beautiful statue in ivory, fell in love with his creation and then, after Aphrodite answered his prayers and brought the statue to life, married it/her and lived happily ever after.

Instead, Ray finds himself in A Star Is Born and, as his protégé becomes more famous and unfaithful, he becomes depressed and contemplates suicide!

Generally accurate in biographical detail, The Woman in the Photograph is fiction, and Gynther takes any liberties she needs. She has created scenes and dialogue to move the story along, and the supporting cast of Paris figures are mostly as we know them, but she brings them to life. (Hemingway and Fitzgerald are long gone by 1929, so do not appear).

And having place names –Montmartre, Notre Dame, the names of streets—Rue St Jacques, Raspail, and of cafes—Dome, Select, Deux Magot—on the page invests the whole enterprise with allure. A novelist can never go wrong in Paris.

The novel has an epilogue set in August of 1946 in which we learn that Lee became a celebrated war correspondent for Conde Nast during the war, reported on the London Blitz and the liberation of Paris, and photographed the corpses at the liberation of Dachau and Buchenwald.

Fame, however, is fleeting. Miller, who had been famous as a supermodel, a photographer, an actress, and a front lines war correspondent, is now almost unknown. There are biographies of Miller, and she is covered in writings about people like Man Ray, but this novel may do more to restore her to public attention than anything done hitherto.