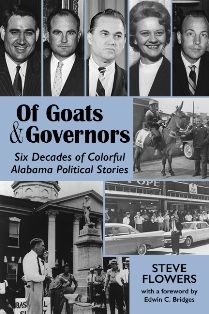 There can be few Alabamians better situated to write this book than Steve Flowers. In this political memoir Flowers devotes chapters to the major figures of Alabama politics—elected officials such as Wallace, Folsom, Richard Shelby and powerful forces such as Paul Hubbard and Judge Frank Johnson Jr. —and sketches the story of his own life in politics.

Flowers grew up in Troy, Pike County, Alabama, and was involved in some capacity with the legislature through high school, then served in the student senate at the University of Alabama and in 1982, at age thirty, was elected to the state legislature and served for sixteen years. He asserts he chose not to seek re-election, and considering how deep and wide his political connections in that district go, one believes him. Since 1998, Flowers has been a prolific commentator on Alabama politics, providing analysis and commentary on radio and television and in a syndicated newspaper column. He was born for it. Flowers was the protégé of Barbour County boss Gardner Bassett, who introduced Flowers to George Wallace “[w]hen [Flowers] was an 11 year old page in 1963.”

Flowers, as it happened, represented Wallace’s home district. The largesse flowed: “One week it would be $400,000 for a park for Clio, the next week $350,000 for a sewer system for Clayton. Clayton would get $600,000 the next week for roads. All of this money was federal money.…Wallace had discretion over where the funds would be spent.” Flowers got the credit.

There is no mention here of Alabama politicians’ oft-proclaimed aversion to federal money.

But there was a quid pro quo. Flowers reminds his readers many times of the absolute need for loyalty. In 1982 the fight was over the House Speaker’s post. Wallace wanted Tom Drake. Flowers, on the phone with Drake, quotes himself as saying: “Mr. Drake, I don’t know you, but if you are the governor’s choice, I’m with you.” Flowers still demonstrates his powerful loyalty. This declaration appears twice:

God decided one day he was going to make the greatest football coach in college history and send him to Alabama and he sent Bear Bryant. Then he decided he was going to create the greatest Southern politician and he made George Wallace. He gave both the talent but also the love and desire to succeed at their callings. They were focused on the love and everything else was secondary.

Flowers generally sees the bright side. He states his belief in the sincerity of Wallace’s racial conversion and declares that John Patterson “epitomizes the phrase Southern gentleman,” even though it was in the race against Patterson that Wallace was “out-segged”—the polite usage here.

There are chapters on Guy Hunt and Don Siegelman, but little mention in either case of legal troubles, even though Siegelman is still in prison. There’s never a discouraging word, with one huge exception. On Senator Jeremiah Denton, Flowers insists “he wrote the book on how to lose a U.S. Senate race.” Denton would not meet with constituents, even in D.C. He and his wife drove “matching Mercedes cars” and in six years “never once visited his home state.”

This book had its origins in newspaper columns so there is a lot of repetition. Whole anecdotes are repeated; more editing was needed.

BUT on the very bright side, this is real insider baseball. Every political anecdote you might ever hear in a bar, on the golf course, or at a luncheon is here, and they are marvelous: Folsom watching the plane crash off the coast of Florida, Folsom forgetting his children’s names on television. Bob Ingram in 1970 dispatched, in secret, to New York City to pick up $100,000 from the Nixon White House to be used for Albert Brewer against Wallace. Bill Baxley, in Vegas, because of his “genius IQ level” and “photographic memory” winning “hundreds of thousands of dollars at blackjack …before they asked him to quit playing….”

Besides the presumably true anecdotes there is even a collection of favorite political jokes:

In heaven St. Peter put the dead politician, not the preacher, in a mansion. Asked why, he replied: Preachers are a dime a dozen up here, but it’s fifty years since we’ve had a politician.

At the brain tissue store the salesman explains: state legislator brain tissue will cost $100,000 per ounce. Why? “It has never been used …and you don’t know how many we had to kill to get an ounce.”