Among the Swamp People: Life in Alabama’s Mobile-Tensaw Delta 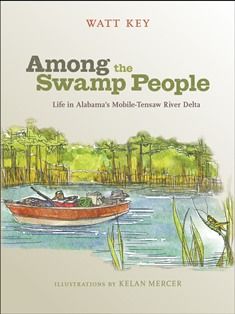 Among the Swamp People is a combination of memoir, nature writing and personal essay. Key, raised in Point Clear on Mobile Bay, writes of his nearly life-long fascination with the Mobile-Tensaw Delta at the north end of the bay. This is the Lower Delta, not to be confused with the Upper Delta. The Upper, he tells us, has more high ground and taller trees. The Lower is swamp. If you are thrown from your boat, or capsize—and you might as there are numerous stumps, submerged logs, and boats with no lights—or are lost overnight, “it will be almost impossible not to come across an alligator or, worst of all, a cottonmouth…cottonmouths are aggressive and extremely poisonous snakes. There are thousands of them….”

This is not attractive to me but Key, a civilized man who lives in Mobile with his wife and three children and even belongs to a Mardi Gras society, falls in love with the swamp, and not for the hunting and fishing, which he does not do. He fixes up a camp and goes most weekends to be alone and a lot of the time to write.

You are wondering about Key’s wife. As a young man, Key brought a date on a trip to Chuckfee Bay. With some friends they plunged around dangerously on dirt roads in an old wreck of a car. She loved it. They married.

We learn that, over time, Key had produced “thirty short stories, ten novels, screenplays, novellas, a few poems,” all of which had been rejected numerous times, and he was quite understandably deeply discouraged. Deciding he needed an agent, he decided to send his “ninth and tenth novels …to five different New York agents… every month for a year.” Finally, Key snagged a New York agent and life changed. She sold the young adult novel Alabama Moon (2006), later made into a film starring John Goodman, to Scribner’s, and that was followed by Dirt Road Home (2010) and Fourmile (2012).

A lot of the above was written, as stated, in his camp, which he built beginning in 1998, one might say literally one board at a time. He describes bringing in the “mantools” and materials, bit by bit: boards, roofing, a generator, in his jonboat.

There is a Thoreauvian tone to this, if you can imagine Walden Pond as a steaming swamp full of mosquitoes and snakes and “colorful” neighbors like Ace and Dan and Carson. Carson checks to see if the power is on by putting his finger in the socket. Dan gets drunk and will swim naked with a knife in his teeth. You get the picture.

Many of the “campers” are as wild as the swamp and as dangerous as the snakes. Over time, Key makes friends with most of them and is not “burned out,” which seems to be a real threat if the natives decide they don’t like you or you just don’t fit in.

Yes, there is a hint of anthropology here. Key, a Mobile computer expert, is a kind of Margaret Mead, except instead of travelling to New Guinea he can go to the swamp on weekends. There he learns some of the local sports, like snatching up young alligators by the backs of their necks, and garners some recipes. (No book these days is complete, it seems, without some recipes. Here is one for using small mullet: “Put ’em in a mason jar with a jalapeno. Boil it.”)

Key comes to know and be accepted by the natives, and it is easy to see why.

Watt Key and his storytelling style are amiable, unthreatening, modest, earnest, and whimsical, in general low-key. (Who could resist?)

But he still found it wise to stay close to his camp. One night, exploring, he comes upon two boats pulled up deep in the marsh. There is gunfire. What were those folks doing? Your guess is as good as his.

There be strange critters out there.