The Redeemers: A Quinn Colson Novel 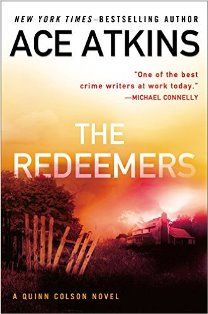 Ace Atkins is generating a shelf of novels at an astonishing pace. Redeemers is his seventeenth.

After graduation from Auburn where he played football, Ace—his real name—worked as a reporter in Florida, mainly crime. He has several standalone crime novels—historically based like Wicked City, set in Phenix City, and investigative/biographically based such as Infamous, about Fatty Arbuckle .

Atkins had an earlier mystery series, the Nick Travers novels, and dropped it, but is now simultaneously generating two crime series.

He has successfully taken over the Robert B. Parker Spenser novels after Parker’s demise and is at the same time writing the Quinn Colson novels.

The Redeemers is the fifth Colson novel, and I can tell you with absolute certainty it is a fine beach read. I just read in on the beach at Dauphin Island.

He has returned to Jericho in Tibbehah County, Mississippi, forty miles east of Oxford, and become sheriff. Again his arch-enemy is Johnny Stagg, the owner of the giant and successful Rebel Truck Stop and the even more lucrative adult strip joint/nightclub/brothel, The Booby Trap. We overhear a conversation between Stagg and his head bouncer Ringold over the previous evening’s shift. “‘Smooth night,’ Ringold said, ‘We had a couple kids up from State that kept getting onstage with Laquita and dancing. One of them took her bikini top and was wearing it like a hat, putting the cups over his ears and tying the string up under his chin.’

‘Them Bulldogs don’t have no respect for strippers.’ [ says Johnny].

‘Yeah,’ Stagg said. ‘But God bless them Rebels. Those boys will call a naked woman ‘ma’am.’”

The Colson novels are about more than crime. They really are fictional explorations of contemporary Mississippi life, not exactly Jane Austen, but broader than is usual in crime fiction—more like James Lee Burke.

The tough Chief Deputy, Lillie Virgil, is competent and respected but the subject of much speculative gossip concerning her sexuality.

Colson’s sister Caddy, a crack addict who suffers from PTSD, of a sort, from a childhood rape, needs to be rescued. “Her face was skeletal and hollow, with black circles under her eyes,” writes Atkins. “There were sores and scabs on her arms, and a few on her neck….”

The drug scourge has not bypassed small-town Mississippi.

Besides caring for Caddy’s child and getting Caddy into rehab, Colson has to deal with the return of his prodigal father Jason, who was a stunt man in Burt Reynolds movies, and his own erratic love life. He has broken up with the county coroner, Ophelia, and taken up with a childhood sweetheart, the doctor’s wife, Anna Lee.

On top of everything else, Stagg has rigged the sheriff’s race and installed Rusty Wise, local insurance salesman. Wise is expected to be Stagg’s puppet.

Carrying along all this sociology and psychological confusion of course is a stream of violent action. Tibbehah County is a modern frontier town. There are still shoot-outs and also kidnapped children sold on the Internet.

Some comical, moronic but deadly thieves, Uncle Peewee and Chase Clanton from Gordo, Alabama, on New Year’s Eve steal the safe of local corrupt lumber magnate Larry Cobb. They travel in an old van with “a shirtless AJ McCarron…Nick Saban, and a smiling Jesus Christ, and…Coach Bryant riding an elephant to victory…” all airbrushed on the side. In the safe is a million dollars and some documents that would topple Stagg’s empire and destroy some crooked politicians in Jackson.

Colson remarks the corruption is a lot like in “Trashcanistan.”

The theft sets in motion a series of homicides by rifle and shovel culminating in an absorbing stand-off in the frozen January woods where the frozen and wounded Colson just barely gets out alive.

I’m glad he does. I’m looking forward to the next novel.