Bone To Be Wild: A Sarah Booth Delaney Mystery 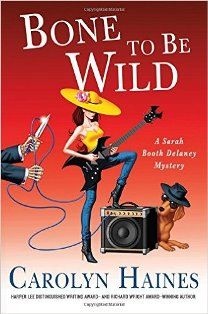 When I was a kid, on Saturday afternoons I caught the latest installment of Lash LaRue or Commander Don Winslow of the U.S. Coast Guard, weekly series often ending in a literal cliff-hanger—to be continued next week. Like those movie matinees, Carolyn Haines’ Bones books have moved now from a mystery series to a mystery serial.

When Haines’ last novel, Booty Bones, set on Dauphin Island, concluded, the hurricane passed, the pirate treasure found, the innocent freed, the guilty locked up, Graf Milieu, Sarah Booth’s fiancé, learns he has a long-lost daughter and goes to California to be a dad. The heartbroken Sarah Booth reluctantly attends the fundraiser gala her friend Tinkie has arranged in New Orleans. The novel closes at 10 P.M. on Halloween at a Monteleone-like hotel. The final lines are: “maybe sometime in the future, I would love again.”

Bone To Be Wild opens about four hours later, around two a.m., the party in full swing, our heroine in an Armani gown, the band, Bad to the Bone, headed up by the sexy blues singer Scott Hampton, an ex-lover of Sarah Booth. Hampton still yearns for Sarah Booth, but understands she will need time. Jitty, her ghost advisor, suggests “Love the One You’re With,” that is, Scott, who is “a fine specimen of manhood,” but Sarah Booth replies: “Scott isn’t some hot body to be used and cast aside.”

The dialog in Haines’ Bones books will occasionally veer from the language of the detective novel to the language of romance. Sarah Booth tells Scott she must “rekindle [her] hope that opening [her] heart is more than a trap for pain.” These are odd conversations considering that Sarah Booth and ex-fiancé Graf never even had a real quarrel, and she is still in love with him.

Hampton is opening a club, Playin’ the Bones, in Sunflower County, right at the magical Sawmill and Pentecostal crossroads where a musician, Robert Johnson most famously, can make a deal with the devil. It should be a huge success, but there are forces at work against it. Death threats arrive by phone.

A cascade of horrors ensues: a dog is kidnapped, which in Haines’ world is very serious business, and a nice man has his house burned down. There are drive-by shootings. Sarah Booth and her regular gang—partner Tinkie, antebellum slave ghost Jitty, the transsexual Cece, Millie at the café, and Sheriff Coleman—go to work sleuthing.

The human gang in this novel is aided, not merely accompanied but aided, by Sarah Booth’s hound Sweetie Pie and her cat Pluto and an adopted dog friend Roscoe, in a scene reminiscent of a Rin Tin Tin or Lassie movie but which in a detective novel is surely jumping the shark. No matter: Haines’ fans love Sarah Booth’s pets and will not mind at all.

The real fun in this novel is in the bizarre array of suspects.

Bijou LaRoche—an oversexed, rapacious wealthy Delta woman “had a reputation for getting what she wanted.” Gertrude Strom, an actual psychotic killer, shot Graf in the last episode but is now inexplicably out on bail. Wilton Frasbaum, former band manager, wants the club to play jazz, not blues. Yancy Bellow, jet-setter plutocrat businessman, would like to own part or all of the club and might move in if Playin’ the Bones fails. Frisco Evans, another local rich guy, is a car dealer in cowboy garb, complete with snap-button shirt, jeans and “a big bronc-riding silver belt buckle.” Frisco collects guns. He wanted the place to be a country music bar. Angela, a local dance instructor wanted the club to be a dinner club, “a ballroom kind of place.” She doesn’t think the town needs “another place where men can go, get drunk, and screw around on their wives and girlfriends.”

Never has there been such passionate, violent debate over the theme of a Mississippi juke joint.

Best of all is a religious cult, Foundation Rock, at the edge of town, run by Jebediah Farley, with “theology picked and culled from the parts of the Bible that suited him.” The sinister Rev. Farley, himself ruled by a mysterious, wealthy right-wing conspiracy, The Midnight Templars, proclaims blues is “the devil’s music” and “the white male was created in God’s image and was given the rights and duties to rule.” Women congregants, denied education and forbidden to think, are essentially frightened prisoners in this small concentration camp with porta-potties and abandoned vehicles. Farley rails that Tinkie and Sarah Booth should return to Zinnia, that “Sodom and Gomorrah.”

Ms. Delaney and her gang, at considerable personal risk, sift successfully through these possibilities and deduce who is guilty, but disconcertingly, at the end, the action is not completed. Stay tuned for the next installment.