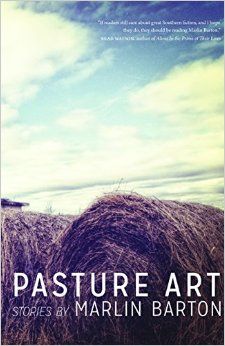 Pasture Art is Marlin Barton’s fifth volume of fiction—there have been two novels and two collections of stories—but this book stands a good chance to be his break-out book. The stories are more insightful, more psychologically complex than any of his previous work. As a story writer, he has arrived.

Like many another Southern fiction writers Barton has his home territory, his own postage stamp of soil which seems to supply him with all the materials he needs. Coincidentally Barton’s patch is the same patch cultivated by the brilliant short story writer Mary Ward Brown—the area around Forkland, Marion, and Demopolis, Alabama—but Brown chose a different slice of the local population. Her people were often professional people, like the judge in “Amaryllis,” or associated with the plantation, the big house, as in the story “New Dresses.” No longer truly wealthy, her white characters are likely members of the local Episcopal church. People of goodwill, not Klan members, they are nevertheless rooted in tradition and distressed by the changes around them, often in the arena of race.

Barton’s people have not seen the inside of the Episcopal church and are not connected to the plantation tradition. They are blue collar, lower middle class, working class, semi-rural, who work at the auto parts store, whose wives are waitresses or dental hygienists. Sometimes they live in the country, often in trailers or in the cheaper, failing neighborhoods of the Black Belt small town.

The judge in Brown’s “Amaryllis” is moved by the beauty of the flower; the locals, clearly not aesthetes, in Barton’s Pasture Art think a farmer’s whimsical hay and tin sculptures—a locomotive, a helicopter—a waste of hay and a pile of junk.

Barton’s folk have little margin for error and live paycheck to paycheck, always near the edge. The pawn shop or payday loan store is not unknown to them. Keeping their children safe from danger and their own bad judgment is a daily problem. Danger lurks not only in the local beer joint but in marijuana, cocaine, methamphetamine labs and even heroin as well as in the flush of adolescent hormones.

With mixed feelings the characters speak of the children who leave, who “get away.” They are missed by their Black Belt families but there is also pride in their accomplishments and a sense of their having “escaped.” Enrolling in the university in Tuscaloosa may be the first step in this process.
Usually white, Barton’s people are not upset by the diminution of deference from their black neighbors; they had never enjoyed any deference. Barton’s dads are not broadminded liberals, exactly, but must adjust anyway when their daughters come out as lesbians as in “Short Days, Dog Days” or take a black boyfriend as in “Midnight Shift.”

In several of these gritty stories, marriages don’t survive and the young or not so young women have to find a way to go forward on their own, using what power they have. That power, in these stories, is often sexual.

In “Pasture Art,” surely inspired by the hay bale art of Route 43 between Eutaw and Demopolis, the reader wonders whether the teenager Leah will move in with the widowed Mr. HutchIns. There is a huge difference in age and sophistication but it might work for both of them.

In “Midnight Shift” David is in thrall to his neighbor but Georgine is unmarried and pregnant and has an on-again, off-again black boyfriend, Thomas. This is all too much for David to cope with.

Aaron, the protagonist of “Watching Kaylie,” is obsessed with the promiscuous and drug-addled Kaylie. A residue of decency allows her not to take advantage of his longings and prostitute herself to him, which would do him great emotional harm. The narrator calls the reader’s attention to this “kindness.”

The 52-page novella Playing War develops another of Barton’s themes: the buried secret. Years earlier there had been a suspicious hunting accident, with Carrie’s secret lover, Bruce, killed. Now Carrie, arming herself for divorce, uses what’s left of her sexual power on several of her husband’s friends to find evidence that perhaps he was involved. In Barton’s small world, the men still crave the girl they wanted in high school. And she still knows it.