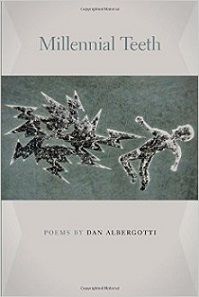 It is easy to see why Dan Albergotti’s 45-poem book, Millennial Teeth, won the 2013 Crab Orchard Series in Poetry, selected by final judge Rodney Jones.
These poems are ambitious, and broad in theme, and a tour de force in form. In a time when some poetry books are based on delicate epiphanies (or "epuffanies" in some cases), Albergotti’s voice is direct as he explores both inner and outer themes.

Perhaps because I recently read an essay about W. D. Snodgrass, I think it is not incorrect to read Albergotti as a confessional poet, in the best sense of that word. Mary Oliver has mastered erasing the line between speaker and reader, but do we think of her as a confessional poet? Perhaps, but reading Albergotti’s work is more akin to taking a shot of burning whiskey than basking in sunshine on the beach.

I don’t subscribe to the current trend that a book manuscript must be all about a theme in order to attain, or deserve, publication. Nevertheless, there is a unity in Millennial Teeth. For the speaker of these poems, religious faith is no solace in the face of grief, loss, human nature, nor the future. In “Invocation,” the second poem in the book, the speaker says, “O lord of every deafened ear,/ I know you’ll never hear/ in vacant air/ this prayer.”

Another theme from that poem is expanded upon, gradually—the inability to refrain from rituals, even brief hopes, as we wrestle with what each day brings. The regular arrival of days themselves, one after one another, is yet another aspect of perhaps the main theme of the book—inevitability. Images of war or terrorism from at least three historic periods appear in poems, with the common theme that children inexorably grow up into the adults that seemingly cannot break such cycles of violence.

With that, and the lack of solace, comes the unanswered question: how do we go on? Even before I came upon the poem, “Disorder,” I sensed a theme of movement. Action does not erase the pain, but it is the alternative to self-destruction, or death. In that poem, the speaker says, “I’ve been thinking about thinking too much,/ about rote movement as alternative,/ just keeping myself going like a shark/ that swims to breathe, evading conscious thought.”

Like Rachel of the Bible, who “refused to be comforted for her children,” (Jeremiah 31:15), the speaker adamantly refuses easy resolutions for the death of his mother, the umbilical cord-caused brain damage of his elder sister, or the coldness and bitterness of his father. There is a sense of emotional exile in the speaker, yet also too much honesty and compassion to prevent their memories from pervading the book.

Form also fits meaning in this book. The speaker comes to an emotional “draw” in meditating about his father; appropriately, the poem is in couplets. While varying his meters, Albergotti also produces a music in these poems, like a swift-flowing stream that pulls the reader along, no matter how raw the emotion. I think of “lord of time and time alone, lord of space and empty space” (from “Invocation”) and, from “Holy Night”: “wishing I could stop the world’s spinning cold,/ drive off its surface and take to the sky,/ break its grativational hold, sever/ myself from it forever then and there?”

Albergotti employs a full range of approaches. There are, by my count, two sonnets, one pantoum, four ghazals, and nine poems in a form I have not personally encountered; call it a nonce form, or a variation on the sonnet: poems of 14 lines, with the first line being two syllables, the next four, the next six, and so forth until, after two 14 syllable lines, the succeeding lines dwindle to end with a two syllable line. Rhyming couplets add to the momentum. I might nickname this form the roller-coaster sonnet. The tension builds, and then, after the second 14-syllable line, the reader wonders: “will he pull it off?” He does every time, and each final, two-line finish obviates any sense that one could disagree with the poem’s final pronouncement. Deliberately repeated words or phrases are also used to full effect in poems such as “Inside” and “Outside.”

There is also some occasional playfulness and nods to other poets. After a prose poem teasing a friend, Christina, about writing a sestina, he reels off a fine one of his own in “Exeunt Voltemund and Cornelius.” Shame on the reader if they do not pick up on the fun with Wallace Stevens in “Anecdote of the Plate,” or the nod to Philip Larkin in the first stanza of “These Be Hectoring Large-Scale Verses.” I would suggest that the short lines and imagery of “Chapter One, Verse One” evoke William Blake, and that the phrasal poem, “Nor” could be the unheard song of Stevens’ Snow Man. “Years And Years And Years Later” is a delightful meditation on a conversation with Jack Gilbert - a poet, of course, known for his love poems and for reducing his poems to only the essential elements. This speaker, while not effusive, never gives up on love, and - spoiler alert - the last word of the poem is “nevertheless.” After pain, after loss, there is nevertheless the next day. As to the question of how we keep going in the void of grounded, sure-footed religious hope, perhaps one answer is found in the concluding couplet of “Ghazal of Air”: “All foundations gone, none left to build./ No floor beneath us, we’ll have to dance on air.”

Work like this belies the assumption that a poet’s work wanes after one’s twenties. We can all look forward, I believe, to Albergotti’s next book. In a time of difficult budgets, I also have to add a word of thanks to the Southern Illinois University Press, not only for the Crab Orchard series, but also for its loyalty to its authors as evidenced by the booklist at the back of this volume.

Mark Dawson lives in and writes from Washington, D.C.