Journey to the Wilderness 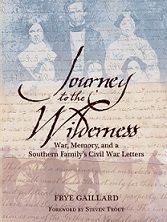 “The past is never dead, it’s not even past” William Faulkner

The familiar quote is at the heart of this book. In the South the past lives on in so many ways and is remembered in just as many different ways. The American Civil War is the lynchpin of the region’s history and self-image and its memory runs like a river through the century and a half since it ended in the Spring of 1865. Americans from other parts of this nation often wonder why its memory is so alive here. Historians have written countless books about every aspect of the conflict, but we still struggle to understand it. What did the War mean, after all? Of course there is no single answer to this question, but Journey to the Wilderness offers a thoughtful and compelling response. It is not a big book, but once read its message is impossible to forget.

The author has written many books with an emphasis on this region and the Civil Rights movement which sought to end many of the prejudices and practices which flowed from the War. But Gaillard is not only a thoughtful writer; he is descended from an old plantation-owning family with branches in South Carolina and Alabama. His great grandfather who was born shortly before the war and remembered it and its aftermath and told him as a boy stories he could not forget. Their theme was the heroism and honor of white Southerners and the hardships they faced after the conflict. How many of us growing up in the South have heard such stories and continue to remember them? I suppose most of us. Gaillard only began to seriously question what he had heard and read growing up in the context of the civil rights era. He determined to find out what the War had been about and why its memory remained so vivid so long after its conclusion. Many of us also wondered how the stories we had heard “on grandmother’s knee” could be true.

Gaillard’s family wrote and saved letters from the War and as he found and read them he relived the conflict, especially those written by Franklin Gaillard, an ancestor from the South Carolina branch of the family. Franklin was an ardent supporter of secession who served in the Army of Northern Virginia from Bull Run to the Wilderness campaign where he was killed. His letters and those written by other members of the family tell the story of the heroism and horror exhibited in the conflict. Gaillard has included lengthy excerpts from these letters to recreate the terrible nature of the conflict. As most of them the Gaillards in the army wrote were addressed to the women of the family, one cannot help but suppose that the accounts of mass casualties and death are played down a bit. Even if that is so they are grim and got grimmer as the conflict wore on.

It is very hard to stop reading this book as the author sets the stage for the letters in the first section and then gives us the letters themselves. Horror and honor, the South sought to resolve that conflict in the years after the War by emphasizing honor and heroism, not horror. Many still do with reenactments and monuments to fallen Confederate leaders. Gaillard’s journey through his family’s experience in the War finally left him to realize that both the heroism and the horror are absolutely indivisible. Simply put, that was the War and it is that dichotomy which lies at the heart of understanding the conflict and its hold still on the minds of so many of us in the South.

Most of us do not have family letters from that era but with Gaillard’s insightful commentary the letters he includes let the reader see the emotional conflicts the War brought and left in its wake. Its brutality is unequaled in American history, and its heroes remain heroic, for many of us still. Gaillard found no magic wand to resolve theWar’s legacy, but he does enable the reader to understand it better. The past is us, as Pogo could have said. We must come to terms with it. Frye Gaillard has done so in Journey to the Wilderness.

Michael Thomason is an Emeritus Professor of History at The University of South Alabama.