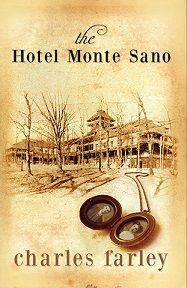 Huntsville author Charles Farley, retired after a long career as teacher and librarian, is now the author of five books. His biography of singer Bobby “Blue” Bland appeared from the University Press of Mississippi in 2010 and since then he has completed his Secrets of Florida trilogy. His protagonist is old Doc Berber, GP, practicing in Port St. Joe, who finds himself turning detective. Doc Berber solves murders in Secrets of San Blas, 2011, Secrets of St. Vincent, 2012, and Secrets of St. Joe, 2014.

Farley’s newest novel, The Hotel Monte Sano, is a stand-alone, but again a story of murder and revenge.

Monte Sano has a strong, fresh opening scene. Eight horsemen from the Lawrence County Home Guard ride up to the Brooks family cabin in Moulton, Alabama, near the end of the Civil War to force father and oldest son John to join the Confederate Army. When the Brookses refuse, saying, “We don’t own no slaves, and we don’t care nothin’ about fightin’ no war,” the army recruiters hang Pa and kill John. Ma makes the surviving eight children swear “you’ll find those bastards and kill ’em all.”

The scene then switches to 1892 at the luxurious Hotel Monte Sano outside Huntsville. Absolutely up to date, the hotel is favored by America’s wealthiest. Even the mega-rich railroad tycoon, Jay Gould, is in residence a while.

Farley’s novel, which began in violence, becomes a teen-age love story as 15-year-old Sophie Franklin and her mother take the 7-day train trip from Schenectady, New York, by train, to enjoy Monte Sano, the “mountain of health.” Sophie writes in her diary “I didn’t know they had mountains in Alabama and I didn’t know there were Italians in Alabama, either, but I guess there are.” At Monte Sano, Sophie begins a secret relationship with young Jude Schrimsher, who works in the stables. They are virtuous teens but the hormones are flowing and Farley has a number of scenes where things could go too far. The romance is teen-steamy –“kissing and cuddling and carrying on…,” but stops short of X-rated.

An unusual element in this novel is the 37 photographs. Each place action occurs—the hotel porch, some guest rooms, Periwinkle Spring, The Natural Well, Brigand’s Den, Inspiration Point, and many others—is accompanied by a photograph of that place. The novel serves as a history and guide to Monte Sano for readers who want that. There is even a photo of the huge wooden carriage, The Talley Ho, used to take guests up and down the mountain. Farley, who lives nearby, has researched this area thoroughly and the reader feels he can take the factual information to the bank.

Less successful I think is the murder mystery itself. A worker named Sherm Williams is found on the grounds, with his throat cut, which is bad for business. There are no good suspects and no obvious motive, but the reader knows the reason for the killing, even though the characters don’t, because they have not read page one where, 28 years earlier, the Brooks family took their revenge blood oath on the Lawrence County Home Guard, no matter how long it took.

At this point the novel moves towards a Hardy Boys mystery; Sophie and Jude and their black friend Smokey, also 15, become teen detectives. This naturally turns out to be dangerous business, and there are dangerous episodes on a mountain cliff, in caves, with gunfire, and with snakes, and the novel seems to wobble between young adult and genre murder, alighting neither place.