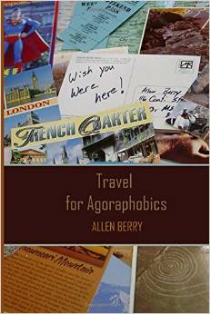 Since the 1920s, poets have been taking their inspiration from the rhythms and moods of jazz. Allen Berry now follows in that tradition, connecting past and present: Chet Baker “raises the sash, / a swan takes flight” in Amsterdam in 1988, and the speaker of “Look for the Silver Lining” says, “I don’t meet him / until Spring 2000. . .” [sitting] “cross-legged / on Stacey’s floor / assembling a CD rack . . . .” The lyric and the mundane are always bumping up against each other in Berry’s poems, and that’s a great part of their pleasure, the romantic aesthetic grounded by the motions of daily life.

Many books of poetry are best savored poem by poem, even as little as one poem a day, perhaps as bedside reading, but Travel for Agoraphobics can be read in one sitting the way one would listen to an album. The forty-eight poems in this book, rather than being divided into sections, flow from jazz to film noir to painting, interweaving themes of love gone wrong, solitude, and the elusive nature of fame. Half in love with loss, the narrators of these poems are dyed-in-the-wool-fedora romantics with a mordant sense of humor. The book’s title poem suggests a sensibility built on an appreciation of irony, as the narrator observes, “From my vantage point on the couch / I realize I’m not as excited /
about entropy as I used to be.” (Think about it.)

Emphasizing the mood and imagery of jazz more than its rhythms, in the first ten poems of the book, Berry shows his versatility with form in an opening persona poem (“WJBS FM”),faux definitions (“A Jazz Dictionary”), two prose poems (“A Fan” and “The Man in the Big Suit”), and a mix of free verse, couplets, and quatrains. With the exception of a beautifully evocative ghazal, “A Farewell to Old Solitudes,” the rest of the book is a similar mixture of the loosely formal and the intuitively free, appropriate to a book with such a strong jazz influence, with a clear sense of the spoken voice and its rhythms.

Berry achieves a commendable variety in tone, from wryly comic to nearly nihilistic. “Love Among Linguists” is a performance piece using the names of the nearly lost languages of the world, including the language of love, and provides a humorous tableau in which to explore the misunderstandings between a man and a woman. “The Cartoon Wife,” with her “basic misunderstanding / Of human physics” smashes her husband’s hand “with a sledgehammer,” wrongly imagining he’d “flatten out, throb, swell, and inevitably / return to normal.”

Sometimes the comic shifts into the surreal—in “Traveling by Night,” a man can only sleep when he’s driving, and in “Pauli’s at the End,” a couple dress up in their best glad rags for “the last night of the world.” After “Pauli’s,” the next four poems, the last of the book, also explore possible ends of possible worlds, echoing earlier poems of endings, mostly romantic. Berry’s eschatological focus, though not upbeat, is lightened by the ways he imagines the world’s end, with neither a bang nor a whimper: “janitorial services will suffer” (“Before the End”), people who don’t realize they’re dead will be “sipping [their] coffee, / Hoping for business to pick up” (“The Hereafter”), and lost radio waves will forever carry cheesy pop songs into space (“Lost Radio Waves Part II”).

Most of the love poems work in a traditionally lyric vein: in “In a Café on the South Side,” a man briefly lusts after a younger woman then goes home and buries his face in his wife’s hair, “inhaling her presence,” and in the linked poems “What it’s About and Not About” and “This Isn’t About Hands,” the theme of longing is extended with a speaker who has learned the lesson of loss: “they always walk away.”

Working in a philosophical vein, Berry explores the palpable presence of nothingness, the physicality of absence, in such poems as “A Concrete Definition of Want” and “When You Lose Your Left Hand.” Ultimately, loss is survivable: with the passage of time, “there’s a sense of peace; a Zen-like / absence of self that is completely self” (“It’s Always Thursday Somewhere”).

I’ll remember these poems for their moods, but also for individual lines that catch and hold the ear like certain haunting notes in a solo—“dress me in a suit of rain,” or “Farewell morning chill and a cat in the windowsill / as rain pours into the gutter, old solitude” (“Play Me in a Minor Key Tonight” and “A Farewell to Old Solitudes”). In his first full-length book of poems, Allen Berry shows us a vivid imagination at work in the world, redeeming losses by finding humor in the human predicament, reframing pain in the language of music and film, and asserting, finally, despite everything, that “I can’t help but go out laughing” (“Pauli’s at the End”).