The Professor: A Legal Thriller 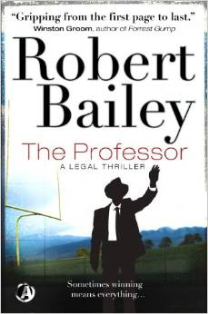 Robert Bailey, in practice as a civil defense trial lawyer in Huntsville for the past thirteen years, has now joined the legion of Alabama attorneys to try their hand at fiction. And it’s not a bad start at all. The Professor has believable, interesting characters and, most importantly, pace.

Set in Tuscaloosa, at the UA Law School, with references to the City Café in Northport, in Faunsdale at the crawfish festival, on Route 82 halfway between Tuscaloosa and Montgomery, and with Alabama demi-gods as supporting cast, The Professor is rich, even over the top, in its desire to please an Alabama readership. We all love familiar place names.

Opening scene: The Waysider, 1969, at 5:30 a.m. Coach Paul Bryant meets with a young trial lawyer, the protagonist, Thomas Jackson McMurtrie. Bryant has been asked by the Dean of the Law School to recruit a professor to teach evidence and persuades McMurtrie, a member of his 1961 championship team, to abandon a potentially lucrative private practice and take this position, for a paltry $15,000 a year. (New professors in the English Department, I happen to know, earned under $10,000 at the time.)

Mama, this time in the voice of the law school faculty has called. The Bryant character tells him, “Tom, I’ve always believed in giving something back to the people and institutions that gave to you.”

In this scene the Bryant character is portrayed with more than respect. He is referred to as THE MAN—as in “the Man set his cigarette on the ashtray,” “the Man took a sip of coffee”—twenty-three times in the first three pages. Tom, like Moses, simply cannot refuse the deity.

(In a further move to please Alabama readers, later in the novel Bailey has ten of Tom’s 1961 teammates make cameo appearances. Lee Roy Jordan and Billy Neighbors have speaking parts. Others appear, supportive in their team blazers, but remain unnamed.)

Happily, young Tom will become a superstar law professor, the Coach Bryant of the Alabama Law School, leading his trial team to national championships and literally writing the book on evidence, but then, at sixty-eight, he is ignominiously forced out by an unscrupulous new law school dean who wants to make his own appointments.

A widower and a model of rectitude, Tom is framed, accused unjustly of an improper relationship with a student, Dawn Murphy, from Elba.

Robert Bailey has not taught in academe, but he has nevertheless captured the viciousness and pettiness that periodically erupt in university life.

But this is a legal thriller, not a scholastic expose.

The case appears. A speeding eighteen-wheeler hauling gasoline has crashed into the Wilcox family on Rt. 82, killing mother, father, and daughter. Grandmother Ruth Ann Wilcox asks Tom to look into the case. The Willistone Trucking Company seems suspicious. Do they break federal rules and force impossible schedules on their drivers? Do their drivers get too little sleep? Do they fake the trucks’ logs? Is Jack Willistone a really greedy scoundrel? The answer is of course “yes,” yes to everything.

Willistone is defended by Jameson Tyler, hot shot civil defense lawyer and the same man who railroaded and betrayed Tom at the law school. Tom will partner with an ex-student, Rick Drake, and the novel morphs from a case about federal trucking regulations, which are more interesting and important than one might think, to a full-blown murder mystery. Drake and McMurtrie dig up witnesses whose testimony would ruin Willistone but Willistone hires JimBone Wheeler, a truly vicious, sociopathic hit man of breathtaking cruelty and coldness, to intimidate, beat, blackmail, and murder those witnesses as fast as they are found.

The novel ends, as it should, in a tense, dramatic courtroom trial, a cliff-hanger with twists. As a debut novelist, Bailey is guilty of a few excesses, but The Professor is truly a page-turner and, as they say, a good read.