The Jumper: A Novel 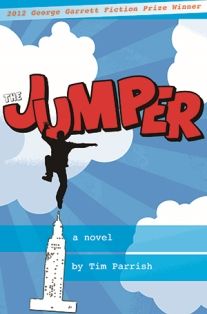 Raised in blue-collar Baton Rouge, after LSU and an MFA in fiction writing at Alabama, Tim Parrish has had his teaching career at Southern Connecticut State University. But in his writing, Parrish has never left the neighborhood in Baton Rouge where he was raised. Through three books in three genres he has returned to this seething, rather toxic place. Red Stick Men, his volume of stories, tells of his childhood and adolescence in the 1960s.

Recently, his memoir, Fear and What Follows: The Violent Education of a Christian Racist, recalls the anger and frustration among lower middle class whites as the civil rights movement gained power and teenage boys were inspired to violence by the rhetoric of resistance.

With The Jumper, winner of the George Garrett Fiction Prize, Parrish has returned again to the same few blocks of run-down, sad little wooden houses at the edge of the industrial “park.”

In the words of one resident it’s “a block from hell” and “smells like a gas station burning.”

“I can’t breathe” she says; “How do people live here?”

The answer is “marginally,” “painfully,” “unhappily.” The denizens of these sad streets lead desperate lives. Trapped by poverty, addictions, bad choices, they would get out if they could. Readers after uplift need look elsewhere.

Their humanity is honored by Parrish in lyrical and sometimes soaring prose, but each reader will decide for himself whether they are more to be pitied than scorned.

The action takes eight days, around 1980, with interchapters of flashback to 1959. The protagonist, Jimmy Strawhorn, works at a Home Depot in Houston. Raised on a remote Texas ranch with a one-eyed paranoid alcoholic named Pepper, Jimmy has always been told he was an orphan but, to his surprise, receives a telegram from his father, J. T., summoning him to Baton Rouge.

His roommate must read it for him. Jimmy has ordinary intelligence but can’t read AT ALL. His coping skills at work are remarkable but when others, especially women, learn he can’t read the menu or movie marquee, their faces show pity or revulsion “and the former was worse than the latter.” Late in the novel Jimmy ruminates on the purpose of written words: “Maybe meaning and communication weren’t what words were for after all, not solid and real like a touch, but slippery and elusive, like promises.”

In Baton Rouge Jimmy meets Dad, a compulsive gambler whose luck is running worse than usual, borrowing money from sadistic loan sharks and being cruelly beaten for nonpayment.

Jimmy demands to know from J.T. the story of his mother, his birth, his abandonment. J.T. has suppressed and revised that chapter of his life until the truth is hardly available.

J.T.’s chapters are titled What J.T. Could Remember If He Would Remember. Slowly, he remembers, one painful layer at a time. We learn of his brief marriage to Marita, a dark, sensuous beauty, on the run from a perversely abusive gangster father in New Orleans.

Jimmy meets Sandra, a kind but distressed young woman running from her own unhappy past.

All, I mean all, of these characters are in despair to the point of suicide, and the Louisiana State Capitol with its observation deck in the clouds is tempting, calling to these potential “jumpers.”

Parrish tells a powerful story, but there is little good news.