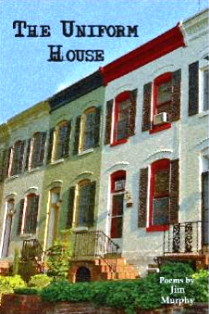 University of Montevallo English professor Jim Murphy’s third collection of poetry takes its title from the first poem in the book, “The Uniform House of Dixie,” which sounds like a Walker Evans photograph and presents images congruent with Evans’ work:

crowd pushes on its blind particulate way.
Here’s a woman’s gaze caught in a compact
mirror. Here’s the sudden stripping of a glove,

ringed finger in the corner of a half-closed eye.

Yet using only part of the phrase for the book’s title opens the possibility grammatically that “uniform” functions purely as an adjective—a house that is in some way standardized in its construction rather than a business that sells uniforms. Such multiplicitous engagement with the possibilities of language is trademark Murphy: his poems get the most out of each word, both in sound and sense.

Looking back at his two earlier books, The Memphis Sun (2000) and Heaven Overland (2009), in order to begin a discussion of Murphy’s development from book to book reveals that Murphy has for a long time been a poet of great talent and settled poetic practice. The poems in the first two books already evince sureness of writing, a recognizable voice, and consistent concerns. In The Uniform House, those primary concerns: with history (“Grant in the Valley”), American music (“Music at the Furnaces”), masculinity (“Autumn Techne”), and moments of sharply felt experience (“Mel Bay Beginning Guitar Method, Kool Keith, and Me”) create a catalogue of approaches as Murphy searches for the meaning of individual experiences, his and others’, through particular images, as in “Lazarus Road”:

Gray bodies of the highway—ever-present
question marks and clover leaves, the past
behind and underneath half-fallen billboards,

signals of lost-road diversions—matchstick
flares and burned-off fields for towering
on-screen kisses brighter than the moon.

New with this book are poems of parenthood—“Learning Norah’s Stars,” “A Case for Pluto”—and a greater engagement with southern history and landscape, no surprise now that Murphy, originally from Illinois, has been resident in Alabama for over a decade.

Throughout, the language is packed, rich, melodious but not uncomfortably dense and achieves something other than ordinary speech—it sounds like poetry without sounding “poetic.” These poems make use of the tools of modern poetry—alliteration, slant and internal rhyme, loosely metrical lines in short stanzas—but can be reminiscent of Gerard Manley Hopkins in their aural complexity and philosophical-religious concerns, as in “‘By the Banks of the Mighty . . .’”:

Belly down in bluestem grass, barely awake,
just alive to the hints of painted April,
headfirst on the swale, and gray beyond

belief—these bones can live. Such fine dust
compacts the dry shins and cracked
hips of the riverbed. Hard water ripped

along this ancestral pit twenty years ago,
shifted course, and shaved off part of Illinois
for Kentucky’s blue moon commonwealth.

More explorations than statements, the poems investigate experience and thought. Robert Frost famously wrote, “No surprise for the writer, no surprise for the reader,” and the poems of The Uniform House embody the process of thinking through and about their subjects, layering on images so that subtle shifts take place as the poem moves along. Murphy is a poet of addition rather than subtraction: he gives us one view, and then another, and then yet another, suggesting a democracy of seeing in which no one way of looking could possibly catch all the truth of a given moment.

Murphy’s poems are up to a kind of magic, and in doing so, they make use of metaphor more than simile, taking the direct approach, as in these lines from “White Hours”:

But you know, I love to move,
to talk, to stir, to sweat, to smash
anything into the steady metal

machine of time, make it confess
its inhuman plan to burn and curl
each one of our white hours to ash.

Given that, will you forgive my tricks
with cards, offhand tickling games,
and the clatter of my idle words?

Murphy can write beautifully about anything, but a few of the poems, either ekphrastic or highly painterly in themselves—a woman under a fluorescent light, a print of a house, Chagall windows in a hospital in Jerusalem, tattooed men—while inarguably well written, have a kind of static quality: they don’t seem to open out or speak to larger concerns in the way the rest of the poems do.

This admirably complex book encompasses a range of human experience and emotion, including humor: the title “Rayon Is Probably the Most Misunderstood of All Fibers” or the lines “Is that the dog or some ferocious / sounding member of the medical / establishment? I’ll never know” in “In the Republic of Tinnitus” or, in “Recitation of the Pepper Cure,” the naming of peppers as “zealous paladins, the four horsemen of capsaicin.”

At the heart of Murphy’s work is a belief in “a full- / time love, freely volunteered, / self-realized” (“‘Reminiscing in Tempo’”). Of course, we also live in a world in which the potential for danger and pain is ever-present, and in two poems in particular, the chillingly sad “A Cutting,” and the edgy “Tools and Utilities,” Murphy employs clear narration and imagery to take us to places that make us think about what is happening, and why: stopped at a gas station on an ordinary day, the speaker in “Tools and Utilities” notices “two chubby twelve-year-olds in string bikinis” in the bed of a pick-up truck with two grown men “up in the cab” and gets a sense that something’s not quite right with the situation, “just kinda funny.” As the truck pulls away, the girls “back to their shaky places” atop the toolbox, he asks, “What dark hand had passed over for a second, / snapped its fingers, and vanished in a cartoon // cloud?”

The poems of The Uniform House engage on first reading and reward rereading. Never simplistic but never obscure, either, they bring us inside a mind considering a particular life in the context of the American culture that is his inheritance, and they draw on and pay homage to cadences of speech, vernacular music, and the American poetic tradition.

Jennifer Horne is the author of Bottle Tree: Poems and the editor of Working the Dirt: An Anthology of Southern Poets. Her latest book is a collection of stories, Tell the World You’re a Wildflower.