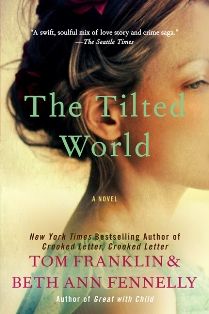 In Oxford, Mississippi, Tom Franklin and Beth Ann Fennelly both write and teach writing at Ole Miss. Tom, a novelist, is best known for Crooked Letter, Crooked Letter, Hell at the Breech, and other works of fiction containing considerable violence and cruelty. Beth Ann is a lyric poet, mother of their three children, but almost as well known for Great with Child, her tender letters to a friend who was expecting. They decided to write The Tilted World together. All marital projects are perilous, from raising children to choosing wallpaper, but writing a novel?

Writing couples occasionally collaborate, true, but usually it is something like Will and Ariel Durant’s The Story of Civilization, not a novel that is part action thriller, part romantic drama.

They had their doubts. Tom can be a procrastinator, missing deadlines sometimes by many months. Beth Ann is organized, punctual.

Could this project succeed? Actually, it worked very well, with the two writers alternating chapters.

Here’s the set-up. In 1927, April, the Great Flood is threatening. The Mississippi is full to bursting and it continues to rain. Will the levees hold? Many, especially children, have already been evacuated from the Delta.

Into this scene come Ham Johnson and Ted Ingersoll, revenue agents under cover, reporting to Herbert Hoover, in charge of flood relief. (Hoover will soon be president.) Their mission is to find a moonshine still out in the country near fictional Hobnob, Mississippi, north of Greenville, where some very tasty, high quality whiskey is being made, and find two revenue agents sent before them, who have disappeared and are probably dead.

Ham and Ing are seasoned tough guys, incorruptible. They had served together in the trenches in World War I at Verdun. After the Armistice they remained a team, tracking down gangsters, mainly violators of the Volstead Act, which everyone knew in 1927 was on borrowed time.

At a general store near Hobnob, they come upon a bloody scene. A young, desperate couple have been shot while robbing the store and their infant baby lies on the floor, now orphaned. Ing will not leave the baby at an orphanage. He learns of a young woman in the country, Dixie Clay Hollister, who has recently lost her child Jacob to scarlet fever. He takes the baby to her.

She is, one quickly learns, the operator of the very fine still. Pure and flavorful moonshine has been her pride.

Of course, the two, Dixie and Ing, cobra and mongoose one might think, fall in love.

Beth Ann writes the chapters from Dixie Clay’s point of view and brings her maternal feelings to bear. For Dixie it is love at first sight; she cherishes the baby, named Willie, savoring the smell of his neck, adoring the wrinkles of fat behind his little knees.

Tom writes of the hunt for murderers. He tells the story of Ham and Ing, the fight to save the levies from the relentless river and from plots to blow them up, which would drown hundreds but perhaps save towns downstream.

The flood will come, as history requires, and the pair has adventures reminiscent of The Last of The Mohicans: mortal danger, natural and man-made, capture and escape, wounds, and healing and finally a happy ending. No spoiler alert here. Anything else would be obscene.

Besides providing a lively story, The Tilted World is also in its way an historical novel. Franklin and Fennely have made extensive use of John M. Barry’s superb history Rising Tide: The Great Mississippi Flood of 1927 and How It Changed America and the memoir Lanterns on the Levee: Recollections of a Planter’s Son by William Alexander Percy. W. A. Percy was the son of a U.S. Senator and the man who raised Walker Percy, the novelist, after the deaths of Walker’s parents. Himself a World War I hero in France, Percy worked on the levees during the crisis. His is an eye-witness account. Both works are well-written and detailed, dealing with issues from meteorology to race relations. Finish the novel and move on to these two fine books.

Footnote: In Britain the publishers have renamed the baby. There, “Willie” is a naughty word.