The Mockingbird Next Door: Life with Harper Lee 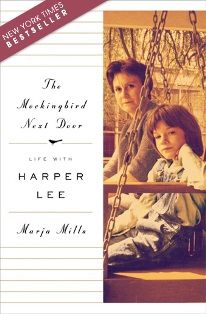 In a June issue of The New York Times Book Review, two writers for the Bookends section respond to the question “When we read fiction, how relevant is the author’s biography?” This question has been asked about Harper Lee, the author of To Kill a Mockingbird, since the author withdrew from public view within a few years of the release of her novel in July of 1960. Several biographies in recent years, a number of them for young readers, have been published without the approval or involvement of the author herself.

Now The Mockingbird Next Door: Life with Harper Lee by Marja Mills, identified as “a memoir,” is an effort to fill some of the voids left by the earlier biographies.

An assignment from The Chicago Tribune for a feature story took Mills and a photographer to Monroeville, Alabama, Lee’s home town on which she based Maycomb, the setting of the novel. The feature was planned as part of the One Book One Chicago initiative, an effort to bring the city together by inspiring all citizens to read the same book, To Kill a Mockingbird. The resulting article, “A Life Apart: Harper Lee, the Complex Woman Behind ‘a Delicious Mystery,’” (The Chicago Tribune, 12 September 2001), included some excellent new photographs of Lee, even though she did not agree to be interviewed. Mills became so interested in her subject and the world in which Lee and her sister Alice lived that she decided to return to the small Alabama town to write “a book about Monroe County” or to “attempt to tell the story of my time with the Lees.” The stated purpose of the book varies from time to time. Regardless, the Lee sisters befriend her.

The Mockingbird Next Door: Life with Harper Lee is a book of some puzzling choices, beginning with the cover. Even though there are two recent photos of Lee in the Tribune article, the cover features an earlier, often reprinted picture of Harper Lee sitting with Mary Badham in her Scout costume on a swing that is apparently on the Finches’ front porch in the movie. That choice raises the question of nonfiction versus fiction before readers turn to the first page. That uncertainty lingers through the book in Harper Lee’s repeated cautions of “off the record” and “a visit, not an interview.” At one point she even reacts to Mills’s pulling out her notepad with “Oh, here we go.”
Mills’s use of interviews from other people becomes a distraction from her own experiences. She relies heavily on Rev. Tom Butts, calling him “a book unto himself” (perhaps hinting of a collaboration to come). Butts’s comments cover such subjects as Lee’s habits of dress, sexual orientation, politics, drinking habits, and her “anonymous” charitable contributions (are they not “anonymous” for a reason?). His reflections are generally not born out in Mills’s experiences.

The organization is essentially stream of consciousness, with each chapter moving from one vignette to another. One chapter, for example, begins with the death of a friend of Harper Lee and then moves to reflections on Gregory Peck, Lee’s appearance in Tuscaloosa for winners of a student essay competition, haircuts, clothes, and Eudora Welty’s “Petrified Man,” in a smooth logical flow.

The memoir is at its best when Mills describes, and responds to, her own experiences of drives around the countryside with one or both Lees (a photo of Alice Lee in the passenger seat is included), shared cups of coffee at diners or kitchen tables, conversations about books or the profession of journalism, and movie nights or dinners with the author and her friends who also welcome Mills to the small town.

The strengths of The Mockingbird Next Door are Mills’s capturing of the pace of small-town life in Monroeville and the ambience of the rural surroundings of Monroe and adjacent counties. Perhaps even more important is the portrayal of Nelle Harper Lee at home as a woman of amazing intellect, eclectic tastes in books, warm hospitality, wicked wit, and caring friendships, at ease in her hometown as an alternative to her life in Manhattan.

The book is also a significant source of the Lees’ past, stories derived primarily from long taped interviews with Alice Lee, who turned 100 on 11 September 2011. She wanted the Lee and Finch backgrounds told (and recorded)and particularly to correct Truman Capote’s characterization of her mother.

The final chapter of the memoir, prior to the epilogue, is a reflective overview of Mills’s life with the Lees.

Nancy Grisham Anderson, an associate professor of English and recipient of the 2006 Eugene Current-Garcia Award, has published articles on Harper Lee and her novel and works by other Southern writers. Portions of this review are reprinted from The Montgomery Advertiser (20 July 2014), with permission.