Birmingham: Then and Now 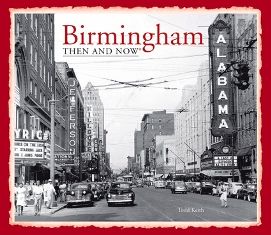 Todd Keith, the author of Insider’s Guide to Birmingham, has collected dozens of photographs, the earliest of which seem to be about 1905, and, restricting himself to the old city limits and early suburbs, matched them up with contemporary shots of the same church, office building, street, park, athletic field, or monument. The photos, combined with brief commentaries, make for a pleasing visual trip through Birmingham’s architectural past.

Sometimes the photos will make you sad or angry. There are photos of splendid, architecturally interesting buildings or cultural landmarks that have been torn down to make way for parking decks or banks. The Joy Young Restaurant, for example, is now Wells Fargo Tower.

Keith suggests the biggest loss might be the beautiful Beaux-Arts Terminal Station, demolished in a 1969 “development scheme that never came to fruition.”

But in what might legitimately be called irony, Keith reminds the reader that there are a good many architectural treasures remaining in Birmingham, as opposed to Atlanta or Nashville, towns with much more vigorous growth, because of “the death of the steel industry and the deterioration of Birmingham’s urban core in the 1960s and 1970s.”

Some pairs of photos look nearly contemporaneous. These are often churches. Highlands United Methodist, Cathedral of St. Paul, Cathedral Church of the Advent, Sixteenth Street Baptist, Temple Emanuel all are spruced up but much the same.

Also saved was the Alabama Power Building, called by the London Daily Express “one of the three most beautiful public utility buildings in the world.” An odd category.

There is a close-up of the power building’s gilded female nude Elektra or “Divinity of Light.” One suspects if this statue were nearer the ground, not atop fourteen stories, there would be some stir even today.

Bachelor Mayor George Ward’s sensational home, Vestavia, 1925, modeled after the Temple of the Vestal Virgins in Rome, was demolished by the Vestavia Hills Baptist Church in 1971. Ward’s folly, the truly eccentric round, domed Temple of Sybil, modeled after a temple in Tivoli, Italy, however, was dismantled and moved up Shades Crest Road on Shades Mountain to the top of Highway 31. Other monuments such as Vulcan are cleaned up but unchanged.

The Bottega Favorita building on Highland Avenue, which appears unchanged, was originally a department store.

Birmingham lost the “lovely” old St Vincent’s Hospital, “demolished to make way for its replacement.” Necessary, but a shame.

Of a different nature entirely is the 1950s photo of an Ensley neighborhood, showing “the pipes of the mill [that] physically tower over the town” with decrepit wooden company shacks on an unpaved street. The shacks are gone, and so are the Ensley mills.

Tuxedo Junction in Ensley, thriving from the 1920s to the 1950s, is now the scene of commemorative plaques and an annual festival.

The airport of 1931 is a quaint little building in the style of an antebellum mansion with passengers in rockers on the front porch. Birmingham-Shuttlesworth International is modern in the extreme.

A few magnificent or unusual buildings are still standing but deteriorating fast. Surely there can be a use for the fanciful 21st Street South Quinlan Castle with its battlements and turrets.

Keith, just for the fun of it, has included a 1912 photo of Louise Wooster’s famous 4th Avenue brothel, located, without irony one guesses, in The Alabama Supply Co. building.