On a Darkling Plain: Stories of the Great Depression 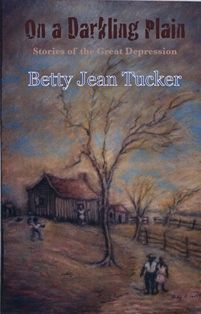 Everybody loves a book that comes with a back story. In his very fine Introduction to On a Darkling Plain, Alabama literary critic Norman McMillan tells us of a nineteen-year-old student at Alabama College who in 1951 published in The Montevallo Review her first story, “My Sister Callie.” That piece was chosen by anthologist Martha Foley as one of the Top One Hundred Distinguished Short Stories of the year.

From 1951 to the present Tucker wrote, it seems, only nine more stories. Five were published and of those four won some sort of literary prize. This volume, published as Tucker is eighty-three, was runner-up for the Tartt First Fiction Award.

Born in 1931, Tucker was a child IN the Depression and a child OF the Depression. Those who lived in the ’30s or were raised by parents who did are shaped by it forever. There is here no other subject.

These are stories of desperate poverty. The characters are not just making do with last year’s coat, they are constantly hungry, even starving. Sometimes, people who have only a little are willing to share—a romantic mythology we like to impose on hard times. Usually, a Darwinian ferocity takes over and the weak fall. In “When Poets Lie,” suffering results from lack of medical care. Often, the characters’ hunger and despair leave deep psychological scars.

In several stories Tucker shows, without restraint, the violence generated by that desperation. In “Hungers,” the cruel and greedy storekeeper Mrs. Landis is shot. “Her head was no head at all. There was just a big bloody hunk of bone and hair and a few of the little rat-like teeth.”

McMillan notes these are “literary” stories, and they are— perhaps TOO literary. Tucker has not the startling insights or gifted singular voice of a Mary Ward Brown—with whom there can be comparisons in setting and subject matter—but rather writes stories informed by a deep reading of twentieth-century fiction. The result is solidly made, realistic stories, often with O. Henry-like surprises and reversals but sometimes conventional and derivative, with recognizable echoes.

In “The Legacy,” we are let into the stream of consciousness, the workings of the protagonist’s mind, as we are into the mind of Steven Dedalus in Joyce’s “Portrait.” But here Tucker lets us see the mind of Jeremy, traumatized by his experiences of World War I, as thoughts of patriotic propaganda, recent horrors, and the lines of the “Star-Spangled Banner” all rush through.

The title of “The Poet’s Deer” comes from Robert Coffin’s poem “Crystal Moment,” in which savage dogs chase the doe relentlessly, but owes something perhaps to Erskine Caldwell also in its depiction of rural sexual depravity, as Uncle George pushes his niece Sissy into sexual liaisons to get her out of the house for someone else to feed.

There is little one would call humor in these stories but in “Hungers” there is an intriguing oddness. The narrator says of the boy protagonist: “being hungry was with him all the time.” Then one day he is passing a house where a man has just died. He is sent to fetch the doctor and when they get back, folks are already gathering, “the women bringing in baskets of fried chicken and potato salad and lard cans of iced tea and milk…. Nobody noticed him and he ate and ate…. Since then he didn’t miss a funeral.”

A peculiar and ironic story, one that doesn’t fit easily with the others is “The Renaissance Man.” Junior Scroggins, who is a rare, privileged person in his late twenties, decides he might be the savior of Screamersville, Alabama, but of course he is a fraud. After rejecting the roles of genius artist and genius writer, he decides on physician. After only a semester or two at the University of Alabama, Junior commences his practice; he “would be a breast examiner specialist.” He moves around town giving women free breast exams, searching for lumps. A furious husband ends this charade, so Junior switches to Baptist preacher, but is so disillusioned by all the bad behavior around him he retreats to reality and decides chasing girls is his calling.

Tucker’s first published story, “Sister Callie,” ends on a relatively positive note. Callie as a girl is a misfit: orphaned, large, friendless, and unattractive with a “kinda yellow” face. But Callie dreams of becoming a nurse and, against the odds, succeeds. The narrator closes the story, and this volume, by saying, “… the Depression was over.”