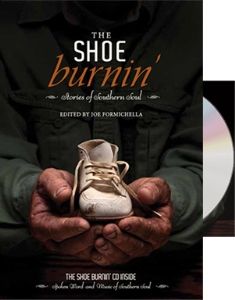 The Shoe Burnin’: Stories of Southern Soul. The title has a story behind it and the subtitle is a pun. The story is simple. On a winter’s night near Brewton, Alabama, a group of kindred spirits were talking, singing, drinking of course, and rather than making a trip to the woodpile, they burned, one at a time, a box of old shoes. This became a ritualized event held around a Fairhope bonfire, the idea being that each shoe burned had a story to tell, or be told about it. At that bonfire last year one young woman happily announced she was finally making a living as a singer and burned her white waitress shoes.

Several talented and in fact famous Nashville singers, guitar players, and songwriters performed songs about shoes, usually written especially for this event, and there were stories read and chunks of memoir, having to do, however tangentially, with shoes. After all, except for the Garden of Eden story, people are likely to be wearing shoes whatever they’re doing.

The pun? You’re on your own.

Of the stories, the first, “Boots,” may be the strongest. Two Desert Storm vets, Aaron and Jason, drive to Birmingham to help, right after a tornado. They are perfect volunteers, trained firemen and EMT’s. They know to wear Red Wing boots and are scornful of the college kids who show up to clear rubble in flip flops. The storm damage is devastating but they have, as they say, seen worse. Yes, in Iraq, and as the stress of dealing with the destruction starts to tell on Aaron, we realize his PTSD is mounting.

This is followed by a humorous story, “The Other Shoe,” by Jennifer Horne, about a little con game being played by a man who may or may not have only one leg.

Suzanne Hudson, whose sense of humor is always unusual, contributes a piece about a wife, Clista, a “meticulous,” “immaculate,” very corseted librarian with an all-beige wardrobe who, finding her husband unfaithful in a particularly embarrassing way, kills him. Clista then flees to Memphis, thinking to start a new life. She tells her story to a free-spirited hitchhiker, Savannah, a bi-polar opposite. Will Clista make it on the lam? Can she go back and face the music?

Several of the memoir pieces involve traumatic or at least important life changes that, of course, involve shoes. For singer/songwriter/actress Lari White the shoes are 6 ½ inch platforms in purple and peach. These are impossible, silly shoes, impractical shoes, but they come to symbolize her and everyone’s desire to stifle occasionally the nagging inner voices that say be a better parent, better child, better friend, work harder. Silly shoes should have a place in everyone’s life.

Nashville musician Chuck Jones writes about changing his life. In the late 80’s,he not only moved from Memphis to Nashville and from rock and roll to country, albeit a Delta Blues, electronic, rock and pop country, and in so doing, from “leather, multi-colored high-top tennis shoes” to an honest pair of cowboy boots.

“The Shoe Burnin’,” then, is a collection of twenty-one pieces of writing and, in an extraordinary piece of lagniappe, a CD produced by Lari White, also about footwear. There are six spoken word readings—sections of the essays and stories in the volume—accompanied usually by guitar and twelve songs by veteran Nashville singer/songwriters, including a fine number by Michael Reno Harrell, “Salvation Army Shoes,” and two by Chuck Jones, “These Shoes Ain’t Got No Soul” and “From There to Eternity.” Chuck Cannon contributes two: “This Old Guitar” and “Revenge.” Chris Clifton performs “After Hours” and “Little Wing,” Cliff Cody plays “Chasing Her Daddy’s Ghost,” and Lisa Carver “Bullet. ” Sarah Buxton sings “Moonshine” and Lari White, the producer, includes “Eden Before the Fall.”

This is not a place to comment much on the songs, but I found them poignant, thoughtful, and sometimes wry. Showcasing a variety of talents, literary and musical, this selection is an unusual, big, bold offering.