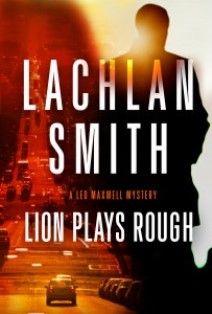 By Lachlan Smith
The Mysterious Press: An Imprint of Grove Press-Atlantic, 2014
$24, Hardcover

Just last year, Lachlan Smith, a Birmingham attorney practicing civil rights and employment law, published his debut thriller, Bear Is Broken. Smith was well prepared to write that novel, having studied writing at Stanford and Cornell and then getting a law degree from UC Berkeley in 2009.

In the opening scene of Bear Is Broken, Leo Maxwell is having lunch with his older brother Teddy Maxwell, famous San Francisco defense attorney, when a hired gun enters the restaurant and shoots Teddy in the head. When Lion Plays Rough opens, Teddy, having survived the shooting, has had some rehab, fallen in love with a brain-damaged girl, and is learning to walk and talk. He will almost certainly never practice law again, but might be able to live independently.

Leo, a lawyer with only one year of experience, is swamped: he’s caring for Teddy, working at figuring out who really killed their mother—their dad is in the pen convicted of the murder—and representing a client, Marty Scarsdale, who is accused of raping thirteen-year-old Erika Lawler. In court, Leo will attempt to discredit the victim’s testimony, shred the state’s evidence, illustrate police incompetence and throw suspicion onto Erika’s uncle. All unsavory and all necessary to a proper defense.

As with Bear Is Broken, nobody—not the public, not the police, not the press— likes defense attorneys. This has been true since the days of Perry Mason, whose clients were in fact innocent. It is important, though, that if guilty Scarsdale not confess even privately to Leo; it would sully the purity of the defense. A lawyer may not put the defendant on the stand if he knows the defendant will lie. There are rules.

With his hands full already, Leo is accosted by a femme fatale, a sultry African-American calling herself Lavinia Martin, who gains his full attention by striking him with her blue Pontiac convertible while Leo is cycling in the hills outside San Francisco, 1600 feet above the sea. Lavinia then appears at his office wearing a “navy-blue suit over a blouse with a plunging neckline” and the young, lonely Leo is transfixed.

She needs his help: her brother Jamil is in Santa Rita jail. The police had pulled him over and found a planted gun in his car, a gun that would be traced back to a murder Jamil didn’t commit.

As complex as all this already seems, it mostly turns out to be simple lies and, as Leo is drawn farther in, the truth becomes much more elusive, with policemen who may or may not be crooked and some ice cold murderous gangsters.

Smith is a devotee of the noir crime novel and enjoys employing Bay Area “atmospherics”: dark streets, fog, the view from the hills, but not as much as in Bear Is Broken. Smith also adds his own variations. The language is less terse, less staccato, than Hammett’s and Leo is definitely not a tough and cynical guy who has seen it all like the hard-boiled Sam Spade of The Maltese Falcon. In fact, he never intimidates anyone that I can remember.

Much of the action, too, is in the noir tradition, but there are a couple of new wrinkles. In a well-rendered section, Leo is set up, arrested, and sent to Santa Rita himself. Since criminals famously loathe child molesters the lawyer defending a child molester is “guilty by association.” Leo, totally vulnerable, has an unpleasant and dangerous weekend.

One would characterize Smith’s novels as plot driven to say the least, but he has created some unusual characters as well. Nikki Matson, an obese, hugely successful and ethically dubious defense attorney, approaches Leo about working together. Visiting her home above the city, Leo wonders “what perverse impulse has inspired a three-hundred pound woman to live on a thin shelf of steel and glass suspended from a crumbling mountainside.”

The Leo Maxwell Mysteries are well-launched. The third should be out soon.