The Fountain of St. James Court; Or, Portrait of the Artist as an Old Woman 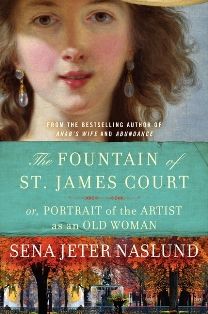 Sena Jeter Naslund first received international acclaim in 1999 for her novel Ahab’s Wife; Or, The Star-Gazer, which some critics called the feminist version of Melville’s Moby-Dick. She was lauded for her extensive research and her mastery of eloquent language in creating this piece of historical fiction. Again, in Abundance (2006), her penetrating portrayal of the period of the French Revolution and of the enigmatic Marie Antoinette earned her praise and a following of loyal fans. Readers will have much to celebrate with her ninth novel, The Fountain of St. James Court; Or, Portrait of the Artist as an Old Woman, in which she portrays two strong women, driven by their passion for their art and haunted by their failures as wives and mothers.

Naslund provides readers the perspectives of these two characters with a novel-within-a-novel structure. Kathryn Callaghan, a contemporary writer living on St. James Court in Old Louisville, has just finished the first draft of her ninth novel, Portrait of the Artist as an Old Woman, based on the eighteenth-century French portrait painter Elisabeth Vigee-Le Brun. Kathryn, nearing seventy and thrice-divorced, hopes the novel will be “a looking glass—albeit streaked, clouded, and freckled by imagination—in which the author might glimpse revelatory images of herself.” With the obvious parallel to James Joyce’s Portrait of the Artist as a Young Man, Kathryn depicts the life of the painter as Elisabeth reflects on those experiences that have shaped her—the doting parents who recognized her extraordinary talent, the privileges awarded her as a participant in French society, her status at court, and the dramatic changes in her life following the October 1789 Revolution. At age eighty-five, having retreated to the countryside outside Paris, Elisabeth recounts her successes and accomplishments as a famous portrait painter but mourns the loss of her only child, Julie, and laments her failures as a mother.

As readers of her earlier works know, Naslund is a highly allusive writer who weaves her vast knowledge of the history of a period; of the figures who populate the era; of literature, music, art, philosophy, and, yes, even science into her novels. In The Fountain of St. James Court; Or, Portrait of the Artist as an Old Woman, Naslund reveals the parallels between the lives of the writer and the painter as she juxtaposes the perspectives in alternating chapters, Fountain and Portrait. The parallels in the structure to Joyce’s Ulysses and to Virginia Woolf’s Ms. Dalloway also become evident. Kathryn’s journey takes place on a chilly day in October, when she casts her newborn novel into the world and begins her journey from morning, through midday and nightfall, into the darkness of her soul. And just as Clarissa Dalloway, on her June day in London, Kathryn learns the truth about herself. Elisabeth’s journey through memories takes place on a day in Spring 1841 at a country retreat in Louveciennes as she awaits the arrival of her guests for a dinner party. As both Kathryn and Elisabeth lament, old artists begin to forget things—the names of their characters, the titles of their paintings. But they find instead the joy and beauty in nature. For Elisabeth, the “sweet scent” of spring is “beloved by all who believe that God’s love is present in the awakening of the earth.” No artist’s brush can capture that moment. For Kathryn, the power of the late afternoon thunderstorm that brings torrents of rain and wind that topples trees is destructive but also life-giving in its capacity to wash the blindness from one’s view.

Sena Jeter Naslund’s eloquent language, her mastery of technique have the power to transport readers from the inner-turmoil of a successful contemporary writer to the harsh realities of life among the splendor of eighteenth-century French society. The lyrical, poetic rendering of her prose is magical. This reviewer (one year older than Naslund), while reading The Fountain of St. James Court; Or, Portrait of the Artist as an Old Woman, relished a glimpse of the mating rituals of hummingbirds outside my screened porch. As these tiny birds, smaller than a thumb, lighter than a penny, performed their dance like synchronized swimmers, like a silent Blue Angels exhibition, I reveled in the joy of nature that Naslund beautifully captures in this, her ninth novel.

Elaine Hughes is Professor Emerita of English, University of Montevallo. She received the Eugene Current-Garcia Award as Alabama’s Distinguished Literary Scholar in 2007 and was the 2011 recipient of the Alabama Humanities Award.