The Kings and Queens of Roam 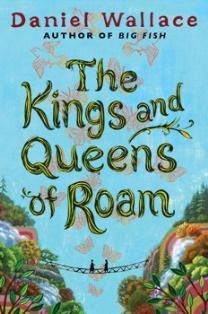 Here in his fifth novel Daniel Wallace has returned to many of the concerns and techniques of Big Fish, his first and most widely admired novel. As readers and viewers of the Tim Burton movie production of Big Fish well know, Wallace’s fiction is never tied too tightly to reality. Here again, in Roam, we are in the land of the tall tale, the fable, fantasy, and fairy tale—and not the tooth fairy kind where there is no down side, just the delivery of a silver coin in the night, but the Brothers Grimm variety, laced with darkness, anxiety, bad behavior, guilt, envy, and pain.

At the center are two sisters, Rachel and Helen McCallister, Rachel (18) and Helen (25) when the novel opens. They live without parents in Roam, a town founded, indeed created by their great-grandfather, and located somewhere about 400 miles from Chicago, but really, no place, as in Utopia.

Rachel has been blind since a fever at age three and is cared for, in her own way, by Helen. Helen is superlatively, transcendentally ugly, and has been since infancy. Rachel is a luminous, extraordinary beauty.

Helen gives in to one of the meanest impulses in contemporary fiction when she tells Rachel she, Helen, is beautiful and Rachel is the ugly one and it’s a good thing Rachel is blind so she won’t ever have to see herself in a mirror, adding, “You don’t have to LOOK at yourself.” She tells Rachel, “At the place where they make faces? The face factory? These are the pieces they didn’t use, and they gave them all to you.” She even says that “God did this to you” and that anyone who tells Rachel she’s pretty is just trying to be nice. Helen is not merely a wicked sister; Helen exemplifies sibling rivalry in its rawest, crudest form.

Helen also tries to make Rachel fearful and totally dependent on her by describing different sections of the town of Roam. There is the Yott House, scene of grisly deaths for anyone living there, the Hanging Tree, the Boneyard, where all the town’s dead are just thrown to rot, the Poison Fields, where nothing “had ever grown, not even dirt” and “The Forest of the Flesh-Eating Birds.”

Helen is, we see, a myth-maker and a liar. But all stories, including lies, are powerful, and lies have a way of becoming reality. What we repeatedly tell others, we eventually believe ourselves. “Even Helen found herself believing some of the stories she told,” Wallace writes. He reminds us that “[o]ut of all the life on Earth this is the one thing only people do. What other animal tells stories? Or more important: what other animal listens?”

Wallace, the ur-myth-maker, supplies the story of the creation of the town of Roam. (Implicit variations on Old Rome abound. No roads lead there. It wasn’t built in a day but pretty fast. When in Roam, etc.)

Roam’s founder is Elijah McCallister, an abandoned orphan who becomes a ship’s cook; sails to Hainan, China; meets Ming Kai, a seller of silk cloths; knocks him on the head; kidnaps him and some caterpillars to America; and wanders until they find a grove of 100 mulberry trees, food for the silkworms. There they establish a silk manufacturing plant and for a while Roam prospers wildly. Elijah, god-like, having created something from nothing, believes he controls everything. But the worms die: “Roam was and always had been at the mercy of an insect.”

With the death of the worms, there will be decline and fall, of course, and Roam will become, literally, a ghost town. The dead, called “left-overs,” sit around the tavern and chat, waiting to move into abandoned houses, and in the manner of the American rust belt, there are lots of them.

Roam becomes a giant yard sale, where people sell whatever they own to anyone who will buy it. Nothing is produced; only exchanged.

Where there was such arrogance, such meanness, there must one day be a reckoning even if it takes generations to arrive. The ill-treated Ming Kai had prophesied that generations to come would pay for McCallister’s sins, and it is so.

Wallace pushes his story to its fantastic end. There is a river of magic, healing water; a Bunyanesque lumberjack with semi-magical dogs; an ancient suspension bridge that must one day fail. As is often the case in Wallace’s fiction, everything seems controlled by fate. Any little event can change one’s entire future.

But the novel ends, as it must, with the question of forgiveness. Declaring it is never too late, Ming Kai’s descendant forgives Elijah McCallister, who had kidnapped his great-grandfather and thrown his family into a kind of bondage.

Helen has likewise done evil. Whether Rachel can forgive her sister remains to be seen. The ghost of her mother advises: “That’s the only real power any of us have—to forgive. We make mistakes and we’re forgiven for them. This is what happens. Otherwise we can’t go on.” July 2013