The Joker: A Memoir 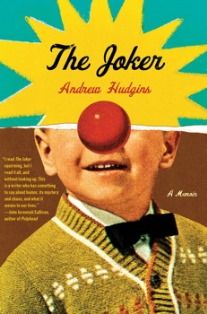 I have known of chess players who can remember every move they made in championship games over many years. When it comes to jokes, I’d say Andrew Hudgins is in that league. He seems to remember every joke he ever heard. He knows elephant jokes, Helen Keller jokes, dead baby jokes, knock-knock jokes, cruelty jokes, racial jokes, poop jokes, sex jokes, fart jokes, Little Moron jokes, Pollack jokes, parrot jokes, and, of course, Alabama jokes and Auburn jokes. And this is just a partial list.

But The Joker is far from a joke book, even though Hudgins tells quite a number of good jokes. (Look for my favorite, the talking dog joke, in chapter thirteen.) The emphasis in this book is rather on the joker. Hudgins explores how jokes have been a crucial part of his maturation from the literal-minded young boy struggling with the meanings and implications of the jokes he hears—how can a newspaper be black and white and “red” all over?—into a more sophisticated adolescent and adult who well understands the ambiguities inherent in so many of the jokes he prizes. He acknowledges that through jokes he “learned to think about religion, race, and sex.” Jokes, he says, “illuminate how we think and the often irresolvable contradictions our lives are built on.”

Reading The Joker, I was fascinated at how Hudgins looks at jokes both from the inside and the outside—anatomically and ecologically, one might say. Like a scientist in a lab, Hudgins probes the nature of the jokes he hears. He is, he says, fascinated with jokes “as mechanisms—machines made of words.” He looks closely, for example, at the importance of surprise in good jokes, admitting that, even with jokes that would otherwise make him cringe—racial jokes or homosexual jokes, say)—surprise can trump those reservations and make him laugh.

More important than the internal analysis of jokes, however, is his consideration of how jokes fit into the external world. Sometimes with shocking candor, he tells of the lives of his family, his friends and enemies, his lovers, his wives and their families—but most importantly himself.

Born into a military family, Hudgins lived in many places, both in the U. S. and abroad. His father, who became a colonel in the Air Force, was rather dour and serious, a man of high principle who took quite seriously the requirements of parenting. So seldom did he laugh that Hudgins can remember every time he heard him chuckle. The Baptist church was vital to the father, and, by extension, to his family. Hudgins admits that even today part of the pleasure of joke telling is the frisson of sinfulness he experiences when he pushes margins.

There is a subversive quality in the close relationship of Hudgins and his mother. She is much looser than her husband, telling her son jokes that she would not have wanted the colonel to know she had told, and Hudgins loved it. She knew her husband detested racial jokes, but she would tell them to her son, and Hudgins loved this sharing of something verboten.

Perhaps the sharpest portrait in the book is of his grandmother, a snuff dipper with a bulldog face, whom he loves dearly and whom he has written about in his poetry. She is a mean-spirited racist, and he squirms hearing her bigoted remarks. But Hudgins passively accepts them. His concern with race is in many ways the most significant theme in the book, and he treats racial jokes with impressive acuteness. He quotes Goethe’s assertion that “nothing shows man’s character more than what he laughs at,” and he worries about what it means if he remains silent when a racial joke is told, but even more what it means if he laughs. Thinking of his grandmother’s racism, he even asks himself when a child if it is a sin to love her. At some point he concludes, “Love is not love that can only love those already flawless.”

This highly intelligent and allusive book is full of revelations about Hudgins himself and others, some of which will make you shudder and many of which will make you laugh. Most of the names in the book are changed, but that will hardly alleviate the shock some will feel if they read the memoir. One rather hopes that members of his first wife’s family do not read the book. It is, however, amusing to think that Condoleezza Rice, whom Hudgins met at a party at Stanford, will wince when and if she reads his account of the mildly racial jokes she tells at a party he attends.

For Hudgins, sharing jokes is essential for a good relationship between two people, and his own love affairs and marriages have risen and fallen on that very issue. In the memoir, he does call his present wife by her real name, Erin, and he celebrates their marriage late in the book, explaining how laughter is at the heart of it.

The Joker is a highly entertaining book, but it is a wise and thoughtful book as well. And it is quite beautifully written. I was, for instance, arrested by this poetic description of himself as an elementary school student: “Clutching a child’s fat pencil, I painstakingly etched words, upstroke and downstroke, onto the lined paper of my Blue Horse Pencil Tablet, paper so near to pulp you could see brown flecks of bark and heartwood in it.” Here is another less poetic passage, where Hudgins reacts to Spenser giving his duplicitous female character Duessa a fox’s tail: “Though it might take some getting used to, I would love to love a woman with a fox’s tail.” In these two quotes readers will see the lyrical and the outrageous sides of Andrew Hudgins, sides that are seen throughout the book, both in the jokes he tells and in his effort to understand them. July 2013

Norman McMillan is author of the memoir, Distant Son: An Alabama Boyhood, and of the plays, Truman Capote: Against a Copper Sky and Ashes of Roses, based on stories of Mary Ward Brown.