Opening the Doors: The Desegregation of the University of Alabama and the Fight for Civil Rights in Tuscaloosa 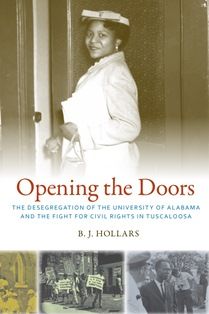 Alabama Governor George Wallace’s infamous stand in the schoolhouse door took place nearly fifty years ago on June 11, 1963, at Foster Auditorium. B. J. Hollars, who took the MFA in writing at the University of Alabama and taught there for three years, is perfectly familiar with the work of E. Culpepper “Cully” Clark, whose The Schoolhouse Door: Segregation’s Last Stand at the University of Alabama was published in 1995. He acknowledges Clark’s work and covers this central event expeditiously.

“The Stand” was, to some extent, drama, but there was certainly the potential for violence. The rioting and mayhem that had occurred during the attempt at integration at Ole Miss in October 1962 left two dead and many injured including 160 U.S. Marshals, twenty-eight of whom had gunshot wounds. In Tuscaloosa, however, there was a lot of advance planning, and the university officials conferred steadily with Justice Department officials—Nicholas Katzenbach on the ground and even the Kennedys in D. C. Even though the outcome was, everybody hoped, foreknown, Wallace was allowed to put on his show of defiance before stepping aside, having promised to keep the segregationist mobs away, and the governor became, on that day, a much more powerful national political figure.

Hollars tells the stories of Vivian Malone and James Hood, including some details of their undergraduate days, later lives and careers, and even some scenes of reconciliation when, for example, Malone-Jones received the Lurleen B. Wallace Award of Courage in 1996. She, like Hood, came to forgive George Wallace, who did seem to regret his racist behavior.

The Malone-Hood story is a good one, worth reading to remind some who may have forgotten and to inform those, probably younger, who have no sense of that piece of Tuscaloosa’s past.

Hollars makes a greater contribution here in his coverage of the events before and after June 1963.

The cover photo of Autherine Lucy is the first indicator. Her February 1956 attempt to integrate the university was unsuccessful and accompanied by crosses burning on campus and mobs both on campus and downtown. Finally, Lucy was forced to escape on the back-seat floor of a speeding car, away from the mob and from the campus where she was to have been an undergraduate.

It was not a pretty picture. University President O. C. Carmichael was apparently not up to the task and the student body was mostly hostile. There were heroes, however, and Hollars recognizes them. Buford Boone won the Pulitzer Prize for his courageous editorials in the Tuscaloosa News, chastising the mobs and calling for justice. The Rev. Emmet Gribbin and administrators Jefferson Bennett and Sarah Healy get deserved praise.

Miss Lucy was, later that day, safely escorted to Bessemer, Alabama, by a caravan of armed black men.

These same men, led by Joe Mallisham, figure again in the last third of Hollars’s book as “The Defenders,” a secret cadre of armed black men, all veterans, all married, who would protect black neighborhoods when the police wouldn’t.

In writing the last third of the book, the story of the Rev. T. Y. Rogers, minister of the First African Baptist church and a protégé of Martin Luther King Jr., and his chief adversary, police chief William Marable, Hollars has done some impressive, fresh research. He interviews a great many survivors, uncovers some previously unknown police files, and scrutinizes the daily coverage in the Tuscaloosa paper, both news items and editorials.

In April 1964, Rev. Rogers led the protests against the segregated facilities in the new county courthouse and, over time, these protests spread to include demands for the hiring of black bus drivers and full integration of restaurants, movie theatres, and hotels.

Chief Marable had a different, more complicated mission. He was determined to uphold the laws, whether he approved of them or not, and prevent violence. He bent, slightly, some rules for Rogers and his marchers and, at the same time, stayed in touch with Grand Wizard Robert Shelton and the KKK, warning them when to say away, or risk arrest.

To his great credit, Marable seems to have pleased no one, angered all. Threatening phone calls accused him of promoting integration and on Tuesday, June 9, 1964, the police, perhaps somewhat provoked, besieged and attacked the demonstrators and then the African Baptist Church with clubs, hoses, and tear gas.

The Rev. T. W. Linton is quoted: “I don’t know that there was a spot from First African Baptist Church all the way down to 15th Street that wasn’t bloody.” Fifty demonstrators were arrested; thirty-three others, many of them children, ended up in the emergency room. “Bloody Tuesday” may well be one of the most underreported battles of the Civil Rights movement.

Tuscaloosa came in fourth, so to speak, among cities in Alabama where racial violence took place, after Birmingham, Montgomery, and Selma (and maybe even Anniston, with the bus burning) but the struggle here was quite intense, even if not as well covered by media.

One incident many will have forgotten concerns the Hollywood star Jack Palance. Palance, his wife and three children were in town to visit his wife’s aunt and decided to attend a showing of the movie The World of Henry Orient, starring Peter Sellers, at the Druid Theater. Word spread, falsely, that he was in town to promote civil rights, and a mob, according to Palance, of perhaps 1,000 people formed outside. While the movie star and his family took shelter in the manager’s office, the mob threw bricks at the theater, smashed the marquee, and fought with the police, who responded with fire hoses and tear gas. Chief Marable himself rescued the Palances. “Marable tossed the movie star and his wife into the backseat of the car, along with their children, and leaped through the back window as one of his officers drove the car to safety,” writes Hollars.

In a news conference the next day, a somewhat sarcastic Palance said, speaking of the pro-segregation mob, “There were no Negroes either inside or outside the theater.”

Hollars, also the author of Thirteen Loops, which told the story of “last lynching” in Mobile, Alabama, has a serviceable, journalistic style. He has done a real service in bringing to light the strife in Tuscaloosa which was, lest we forget, the home of the United Klans of America. Many of the city fathers preferred that the light shine elsewhere. July 2013