Crossing on the Paris 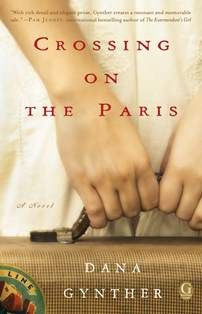 Walking with the crowd to board the maiden passage of the Paris, Constance Stone is startled by a photographer's flash which makes the two women nearest her, a petite redhead and an older woman to the side, pause as well. Unknown to each other and separated by years and station, the three primary characters of Dana Gynther's first novel begin their five-day journey of choices and change.

Women had just won the right to vote the year before the June 15, 1921, crossing from France to America by way of England, and Constance Stone's academic husband chuckles when she says she is going to Paris to bring her head-strong sister back to Massachusetts at her father's request. He, in fact, forbids her to go, but she books the middle deck of the Paris for the return trip.

Julie Vernet's family is still in deep mourning for their four sons lost in World War I when she applies for service on the Paris and is assigned below water level. Vera Sinclair, who looks in the mirror toward the end of the book and thinks of the three as "the maiden, the mother and the crone," books the upper deck suite so her maid Amandine can stay next door, a convenience the new ship offered its wealthy travelers.

During the voyage readers will see loss of innocence, relationship changes, questions about truth, old loves, new loves, false loves. When a character's education and sensibilities require an elegant voice, Gynther responds. Vera has written and illustrated her thirteen affairs and other life events in journals, and on the crossing she wants only to reread her stories. Listening to a conversation, she thinks, "A few years back she would have stored these words and pulled them out again when needed. Now they just fall to the floor, forgotten...."

The S.S. Paris is almost a character itself with the grumbling oil-fired turbines in its black underbelly, the eclectic sociability of its middle deck, and the elegance of the upper deck with its fine cuisine and rooms that offer the choice of palatial decor or the new art deco.

Gynther spent over a year at a village near the port town of Bordeaux, France, but it was only later, while translating a museum catalogue of the giant Atlantic steamers, that she became fascinated with the ships. She grew up in Auburn, where her parents both taught at the university, and after earning two degrees at the University of Alabama, moved to Spain where she and her husband teach and translate. She is working on two more novels while their daughters are in school.

Those who like historical fiction will enjoy the research, those who enjoy travel will understand how it can transform, and those who just want a good read will find pleasure in the story. Crossing on the Paris has been named an Indie Next Pick and a Barnes and Noble Hot Pick for Book Clubs, and Gynther was recognized as a Target Emerging Author. July 2013

Judith Nunn is a retired journalist and a writer in Auburn.