The Books That Mattered: A Reader’s Memoir 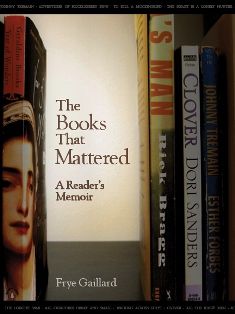 A few writers, even in mid-career, will deny that they read anything much. Faulkner denied, disingenuously, that he had read Joyce’s Ulysses, for example, probably for fear readers would feel he had been unduly influenced by Joyce’s stream-of-consciousness experiments.

Erskine Caldwell consistently told interviewers he was too busy writing to do any reading. Both these Southerners wanting to be thought “natural geniuses” had in fact been extensively educated, in literature and languages, Faulkner at Ole Miss and Caldwell mainly at UVA.

Frye Gaillard, author of some twenty volumes and winner of both the Lillian Smith Award and the Clarence Cason Award, is solidly in this latter tradition, writing here with insight and feeling about the books that mattered.

The book offers “eleven essays featuring thirty-odd books.” He understands the list is “deeply personal and purely my own.” Such lists always are. Considering that Gaillard’s work has usually been concerned with questions of civil rights—integration, mandatory school busing—with occasional side trips into the world of country music and NASCAR and that his lifelong heroes are Senator Robert F. Kennedy and President Jimmy Carter, most of his choices are not too surprising.

Gaillard’s conscience and consciousness were shaped by what John Gardner or any critic would call moral fiction—and considerable moral nonfiction. He praises the human values put forth so powerfully in The Adventures of Huckleberry Finn, To Kill A Mockingbird, A Curtain of Green by Eudora Welty, Black Boy by Richard Wright, South to a Very Old Place by Albert Murray, and Killers of the Dream by Lillian Smith.

Gaillard was educated in the history of Native Americans by works such as Bury My Heart at Wounded Knee. Stories of injustice captivated him. Gaillard discusses at length the beauty and force of The Grapes of Wrath and the Argentine Jacobo Timerman’s memoir, Prisoner Without a Name, Cell Without a Number. Gaillard’s strong interest in American politics of course led him to value All the King’s Men by Robert Penn Warren and The Unfinished Odyssey of Robert Kennedy by David Halberstam.

He freely acknowledges the absence of Shakespeare, Thomas Mann, Dostoevsky. In fact, there are few writers who are not Americans. Gaillard was moved most by issues close to home.

Perhaps more surprisingly, Faulkner and Hemingway and Fitzgerald are also missing. (FYI: their writers who mattered were, respectively, Joyce, Turgenev and John Keats.)

Though Gaillard praises beautiful writing, linguistic playfulness does not interest him much; it is clear from this list that what moved Gaillard were works of social protest, social realism, psychological realism, stories of human struggle, with the humans enduring, persevering, never losing their humanity and perhaps one day prevailing.

Gaillard writes that “for those of us who love a good book, the end of great writing is not in sight.” He thinks that Ahab’s Wife by Sena Jeter Naslund is “one of the first classics of the twenty-first century.”

There is little interest here in modernism, post-modernism, magical realism, the experimental: no Borges, no Ulysses, no Mrs. Dalloway, no Hundred Years of Solitude, no Lolita. But this is Gaillard’s list, the books that mattered most to him. He encourages us to ruminate on the books of our lives and develop our own lists. April 2013

Don Noble is host of the Alabama Public Television literary interview show Bookmark and the editor of A State of Laughter: Comic Fiction from Alabama. This review was originally broadcast on Alabama Public Radio. April 2013

Editor’s Note: Frye Gaillard will be at the Alabama Book Festival on April 20, 2013, in Montgomery’s Old Alabama Town.