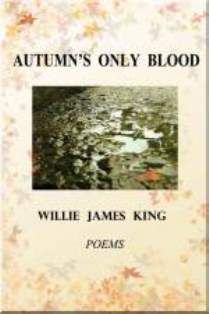 Willie James King’s fourth collection of poetry admirably continues the hallmarks of his previous work. He doesn’t just integrate the public and the personal, the political and the contemplative, but explores the myriad ways in which these dichotomies reflect and inform each other.

Its dedication to Troy Davis, executed by Georgia in 2011 for a murder he likely may not have committed, announces the book’s outright political orientation. But the book is not “political” in a narrow sense. Instead, King demonstrates that the natural world, as well as the entire human community, bears witness to the outrages of injustice and, by extension, shares responsibility for them.

Most effectively, the poems examine politically fraught events, not through collective generalities, but through the intimacies of personal involvement. Among the most riveting poems is “You Go Back, If You Want,” in which the speaker’s elderly aunt describes her days as a cook for a white family, whom she stayed ever prepared to kill with poison in their food if they ever proved complicit in any cruelty toward her own family or people. Several poems in the voice of a 1960s Selma school teacher reveal the fierce personal struggle between wanting to encourage her students’ public protests against racism and needing to protect them from the real physical endangerment to which they are committing themselves.

King insists that injustices don’t just happen “out there,” but that our very awareness of them requires us to examine our own hearts and minds, that the struggle for justice in the world is a struggle for justness and rectitude within ourselves. We are all under profound indictment. “The Evening News” contains a simple, touching trope for this insight. It describes a grandmother who cleaned and dressed her grandchildren, and seated them formally on the sofa, to watch Walter Cronkite’s evening newscasts, as she assumed that he could see them as well as vice-versa. As news of the day’s horrors unfolded, the grandmother responded verbally to Mr. Cronkite and required the children to do likewise. None of us is just a viewer—we are all participants.

A harsher, yet beautiful, image of this imperative to self-examination is the description of a mockingbird killed when it flew into a window: “It / must have fought its own reflection / as anger entered into it when it saw / the image of itself in the dingy / window pane....” The end result of “knowing oneself” isn’t always salutary.

Ultimately, though, the overall tone of the book is quietly meditative. Recurrent motifs include night, the self-revelations induced by insomnia, and attempts to fathom the hidden machinations of a world obscured by darkness. In this regard, King’s best poems are reminiscent of the great Lucille Clifton. For both poets, even the harshest of emotions—outrage, anger, grief—when confronted in quiet and in truth can be transformed into a sustaining wisdom. April 2013

Tony Crunk teaches in the Writing Our Stories program.