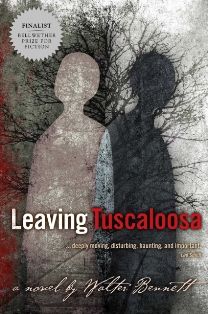 A novel called Leaving Tuscaloosa is simply irresistible to a resident, past or present, of Tuscaloosa. Bennett, who grew up in Tuscaloosa and has had a long career as a lawyer, law professor, and judge, now lives in Chapel Hill, North Carolina, and has studied fiction writing with Lee Smith, among others.

He begins the novel, his first, with a map of Tuscaloosa so the reader can follow the action, from University Boulevard (which he calls Main Street) to 15th Street, to Hackberry to Queen City. Some action takes place in what he calls the Red Elephant restaurant on 10th Ave.—not yet Bryant Blvd.—which was The Corner. Kids neck in the cemetery down the street. The railroad tracks play a large part, and the black section of town, called Cherrytown, south across the tracks, is the center of the action.

Throughout the long hot days and nights of this novel, the local paper mill fills the town with its “pulpy smell” like “the breath of a disease.” This intensifies the general feeling of suffocation and decay.

Set in 1962, this is a race novel, and a lot of what happens and the characters who perform the actions seem, at least at first, familiar, from the evening news and many Southern novels.

Leaving Tuscaloosa is a cut above the average, however. As the story progresses the reader is drawn in by a large cast of mostly damaged characters who become increasingly complicated and interesting, and the novel moves from predictable to something like inevitable, from events that are disturbing and violent to a climax that approaches the tragic. For a first novel this is a real accomplishment.

The action begins with a carload of bored white boys on a Friday night, driving around and drinking beer and up to no good. Their stupid prank, throwing an egg at a black preacher walking along the road, turns catastrophic. The preacher dies of a heart attack.

The teen who threw the egg, a high school pitching ace, Richeboux Branscomb, called Bo, is not an evil, racist kid. He is himself depressed, lives with his depressed, unhappy mother and his violent stepfather while his shallow, materialistic, remarried father–who left after Bo’s sister Leigh died of leukemia—pursues further wealth developing a golf course and housing development just across the Black Warrior River in Northport. At the close, Bo is described as “a boy with a not-quite-dead spark of humanity.”

As a younger boy Bo had had a black friend, Acee, but in Deep South, Faulknerian style, the friendship had to end at puberty. Acee Waites, we are told, also has a dead sister, Annie, who died of diphtheria, and early in the novel his older brother, Raiford, becomes a fugitive after killing a deputy in self-defense.

Intelligent, impatient, and angry, Raiford was emerging as a charismatic civil rights leader out in rural Tuscaloosa County, organizing and demonstrating. Raiford, however, is more Black Panther than MLK Jr. Acee, also intelligent but, additionally, artistic—he works creating metal sculpture with a welding torch and might have a future as an sculptor—has been chosen by Preacher John Gryce as The One. Preacher Gryce believes Acee should become a preacher, a Moses who can lead his people to freedom right there in Tuscaloosa. This is a terrible and mortally dangerous commitment.

Keeping Raiford from being lynched is the heart of the novel. The chief deputy, a giant named Sugarman Starnes, is violent and sadistic to a frightening degree, the apotheosis of meanness, but Bennett also gives him a tortured childhood in which his grandmother beat him regularly with “a harness strap.” Starnes has a limp, carries a whip handle, has no regard for the niceties of law, and makes Simon Legree look like a social worker.

It may all sound at first like melodrama, but it has more depth than that. Even though the material seems used sometimes, this novel finally poses the important question, especially for Acee: Stay home and give his life to the movement or leave Tuscaloosa? March 2013