The Silent Season of a Hero: The Sports Writing of Gay Talese 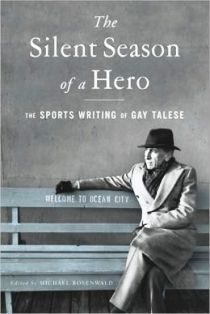 Readers today may think of Gay Talese as the immersion journalist who hung out with the Bonnano Mafia family and published Honor Thy Father or the writer who explored America’s sexual mores and reported back in Thy Neighbor’s Wife or the historian of the New York Times in The Kingdom and the Power.

It is easy to forget that Talese started out as a sports reporter and has been writing about football, boxing, basketball, golf, even soccer throughout his long career.

This highly readable, highly varied anthology begins with pieces Talese wrote for his hometown newspaper, The Ocean City, New Jersey Sentinel Ledger, and then pieces written while Talese was a student at the University of Alabama. Talese, class of ’53, was sports editor for the Crimson White and included here are two pieces: “An Afternoon on the Football Field” and “The Locker Room,” set moments after a 7-3 loss to Georgia Tech.

As Rosenwald writes in his Introduction, Talese always had a slightly different approach as a sportswriter.

He rarely “covered” the game, he covered the individuals playing the game, and he often found the losers more interesting, more multi-dimensional than the winners. Talese was consciously or unconsciously developing his method, a method which would over time be recognized as the beginnings of the New Journalism.

He would not report events in the conventional “objective” journalistic style, but tell a story, create characters with real names, build the piece scene by scene and include as much authentic dialogue as possible.

In addition, he often chose to focus not on the “star” but on a peripheral actor, someone no one else notices, but who has a story not yet told.

There is a 1957 piece on Ruby Goldstein, perhaps the “best referee in boxing.” Goldstein is a lonely man because he dares not associate with anyone in the game for fear of looking biased. Talese writes of Mike Gillan, the blacksmith who shoes horses for shows at Madison Square Garden, Dr. Walter Jacobs who makes custom mouthpieces for boxers, and George Bannon, official timekeeper for more than 1000 matches. These were usually one-off stories.

Rosenwald reminds us that Talese wrote about Floyd Patterson thirty-seven times, enough for a small book. Although Patterson was a very private person, Talese, courteous, modest, and always an interested listener, gained his confidence. And Patterson’s career, winning and then losing the heavyweight crown, fit Talese’s needs. As Talese put it, Patterson’s “up-and-down experiences broadened my capacity for story-telling and writing scenes that shifted between the past and the present.”

Included in this collection, of course, is the profile of Joe DiMaggio. Rosenwald says many sports writers, including David Halberstam, argue it is the “single most memorable sports story ever written.” This is all the more amazing because the retired, unhappy DiMaggio refused to talk to Talese, and Talese pulled it off by carefully observing DiMaggio, watching his face and body language and how friends and strangers related to him.

Also included are a long profile of the aging Joe Louis at home with his wife and another of the aging Mohammed Ali in Havana meeting with an aging Fidel Castro. They are an odd couple indeed, but both had rebellious personalities and impressive powers of endurance over time.

P. S.: As a member of the Alabama State Retirement System, I was delighted to see the profile of Robert Trent Jones, “ranked by many experts as America’s top golf course architect.”